14U Offense-Defense-Out with a Goalie Twist

Purpose: To create an ultra-high tempo in attacking the offensive net while giving players goal-scoring opportunities. Also, this drill creates a 1v1 battle situation, awarding the defensive players an opportunity to create quick transition with breakout passes. The twist on this drill is encouraging the goaltender to make the breakout pass when the opportunity arises. This allows goalies to refine their puck-handling skills.

Drill Structure: Place two nets cross-ice. Use a chalk marker to draw two parallel lines from the extended goal line to blue line creating a mini neutral zone. This area is important for the offensive player anticipating a head-man pass from their teammate in the defensive zone (who may be the goalie). Drill begins with one player on breakaway and one player backchecking. Once the attacking player passes the neutral zone, a new defending player slides into the NZ to receive a breakout pass. Drill is continuous.

Coaching Points: Essentially this is a 1v1 battle drill with quick action. Players waiting to enter the drill must be ready to jump in the NZ and support the puck or create a good passing lane for their teammates. Encourage the player in the NZ to be moving, with stick on ice, and creating passing lanes. Also, encourage this player to attack the net immediately once puck is on his or her stick. Encourage the defender to play tenacious defense and create turnovers with stick-on-stick play while keeping body between the offensive player and net. Note: Both defensive player and goalie can make breakout pass. This transition pass should happen frequently and fast. Once offensive player loses the puck, teach the proper backcheck skills of moving feet, stick on ice and filling middle lane back to net. This drill is great to teach roles away from the puck. Watch your players to see how quickly they can change roles from attacker to defender. 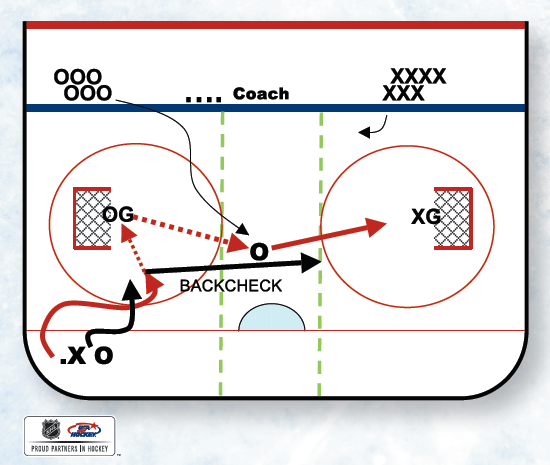 Previous ADM Drills of the Month