Purpose: The big box acts as a barrier that offensive and defensive players must negotiate with skating and puck-support skills. The idea is to encourage 3v3 play, pace and transition. More importantly, this game will force the offensive players away from the puck to skate hard, or move fast to join the rush on the opposite side of the box. The nice thing about this drill is that it reinforces good offensive habits. If the players don’t skate hard to support the puck, they will not be in the offensive rush. They will literally be stuck behind the box, out of the play.

Coaching Points: Play 3v3 in one half of the ice (from the center red line). The drill can be played side-to-side or lengthwise. Waiting players are located inside the box (constructed of foam dividers). Put an emphasis on coaching the players who don’t have the puck and make sure these support players are anticipating offense and moving assertively to join the offensive action at the opposite side of the ice.

Also, when a defensive player gains control of the puck, teach that puck carrier to attack the open lane instantly. Encourage them to avoid bringing the puck back toward the defensive net. At times, all three defenders may be on the opposite side of the ice, which will allow the puck carrier an open lane to the offensive net. Instruct them to take it.

Equipment: Two nets, dividers and pucks. This drill can also be run in the neutral zone utilizing the width of the rink.

Comments: This drill will identify players who are slow to react or just plain slow away from the puck. Encourage anticipation to offense and racing up the ice to the opponents’ net. Use short shifts. Have players jump over dividers to start and end shifts. 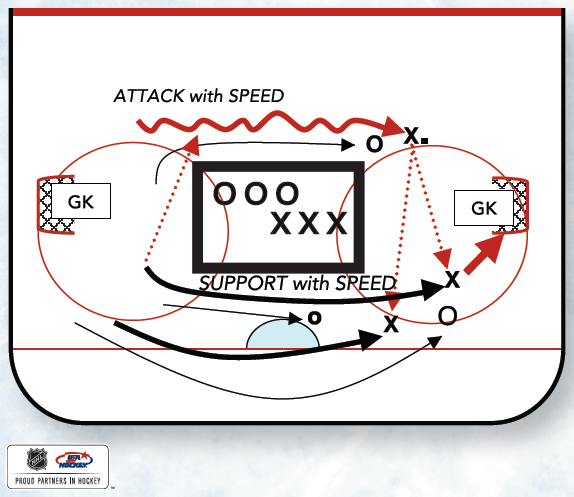