The 2016 U.S. National Sled Hockey Team is in Bridgewater, Nova Scotia, for the 2016 World Sled Hockey Challenge. Tournament play begins Sunday (Jan. 17) and will conclude on Saturday, Jan. 23. A daily Team USA notebook can be found below.

The United States faces Canada tonight in the championship game of the 2016 World Sled Hockey Challenge here at Lunenburg County Lifestyle Centre (capacity: 1,200) in Bridgewater, Nova Scotia. This is Team USA’s fifth consecutive trip to the tournament’s championship game. Additionally, it is the fifth time the two teams will face-off for the tournament title. For full gameday details, click here.

OFF-DAY
The U.S. National Sled Hockey Team was given the day off by the coaching staff after facing Canada on Wednesday (Jan. 20; OTL, 2-1) and Russia yesterday (Jan. 21; W, 2-1). The players participated in a self-created shinny-tournament in the team room. Some players visited the hotel's pool where they took trips down the water-slide.

LAST GAME: USA 2, RUSSIA 1
Declan Farmer and Kevin McKee each recorded two points and Brody Roybal scored the game-winning goal in the third period as the U.S. National Sled Hockey Team defeated Russia, 2-1, in the semifinals of the 2016 World Sled Hockey Challenge. Tyler Carron was named the U.S. Player of the Game. For a complete game recap, click here.

DINNER WITH TEAM HOSTS
Thursday night (Jan. 21), Team USA players and staff enjoyed a steak and lobster dinner at the home of Cam Seamone, one of Team USA's hosts here in Bridgewater, Nova Scotia.  The team also presented signed Team USA jerseys to the two hosts, Cam, and Jennifer Milbury, for their tireless efforts in assisting the team throughout the event.

On Thursday (Jan. 21), Declan Farmer set a new U.S. record for most points in a single WSHC with 10 (6-4) and is one goal away from tying Nikko Landeros’ U.S. record for most goals (7) in a WSHC, which he set in April 2011. Kevin McKee’s seven assists in a single WSHC are also a new U.S. record, surpassing Farmer’s six-assist performance in last year’s tournament. Additionally, McKee’s nine points (2-7) overall tie Farmer’s point total from last year for second all-time. Steve Cash finished last year’s tournament with a 0.66 goals-against-average and .936 save percentage, both of which are Team USA bests in a single WSHC. 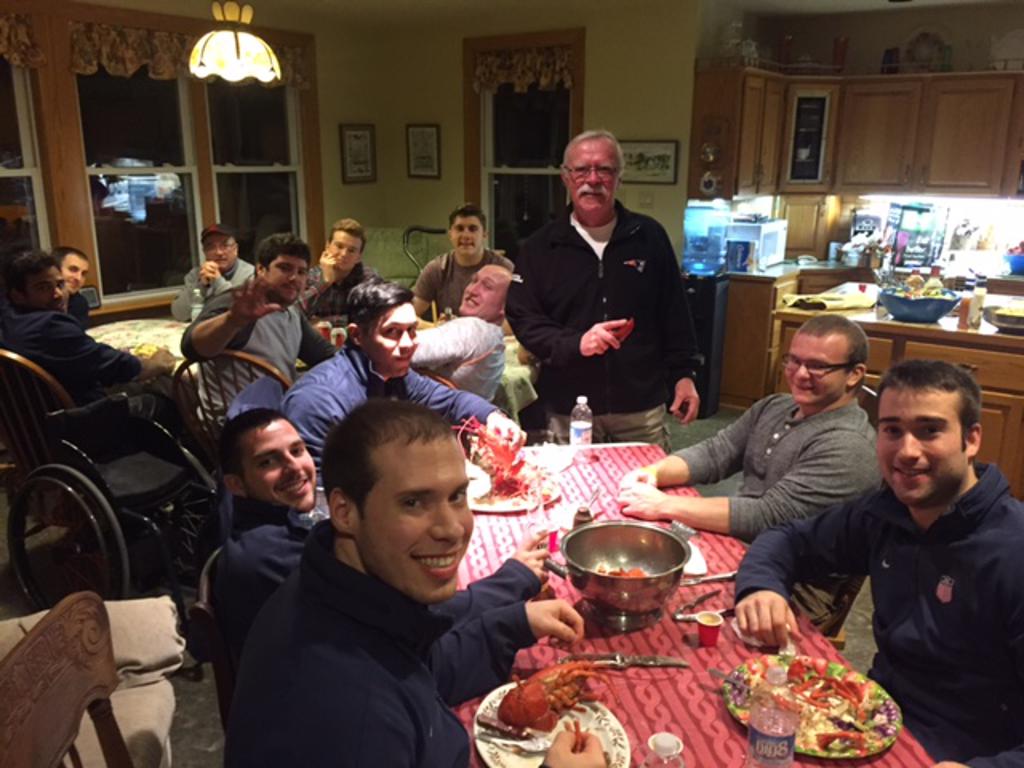 TONIGHT'S GAME
The U.S. National Sled Hockey Team outshot Canada, 28-13, but fell in a shootout, 3-2. Kevin McKee tallied a goal and an assist and Nikko Landeros was named the U.S. Player of the Game. For a complete game recap, click here.

CAPTAIN'S THOUGHTS
Captain Josh Sweeney reflected on Team USA’s first loss since March 11, 2014 (2-1 vs. Russia in the preliminary round of the 2014 Paralympic Winter Games), “It is what it is. That’s part of the love of the game; nothing is certain. As much as you would love to you can’t expect to win every game. We just need to look at what we didn’t do and learn from the loss; otherwise, we won’t get better as a team.”

PRACTICE TODAY
The U.S. National Sled Hockey Team has practice today from 11:30am-12:30pm ET. Practice will include an emphasis on defense and special teams before concluding with a traditional shootout. The practice is Team USA's final tune-up for its tilt tomorrow (Jan. 20) against Canada. Puck drop is set for 6 p.m. ET and will be streamed live on FASTHockey.com.

TEAM USA IN 2016 WSHC
Through two games, Declan Farmer leads the tournament in goals (5) and points (7) while Josh Pauls and Kevin McKee share the tournament lead in assists with four. As a team, the United States ranks first in goals scored (14), goals-per-game (7), power-play percentage (50%) and penalty-kill percentage (100%).

OFF-DAY HAPPENINGS
During time away from the rink, players have taken to playing mini-sticks, Xbox, cards and even venturing outside for some sledding. This evening the team will be attending the local movie theatre where players and staff will have the choice of seeing Star Wars: The Force Awakens or The Revenant.

LOOKING AHEAD
Tomorrow Team USA will have practice from 11:30-12:30pm ET before Wednesday's game against Canada. Puck drop is set for 6p.m. ET and will be streamed live on FASTHockey.com.

HE SAID IT
Reflecting on teammate Declan Farmer's hat-trick versus Korea, Josh Pauls said, "He does pretty much everything. He scores a lot; he back checks hard. It's crazy to say he's 18 years old and already has another hat trick. It's kind of unheard of but he's such a solid player. We're really glad to have him, especially on our top line with Brody and Kevin they've been playing really well together."

Team USA is back on the ice here in Bridgewater, Nova Scotia, for its last practice before opening WSHC play against Korea tomorrow at 11am ET. While yesterday's practice included 3-on-3 battles, today's practice focused on special teams and will conclude with the traditional shootout competition.

TEAM USA TAKES IN JUNIOR A HOCKEY
Several members of the U.S. National Sled Hockey Team stopped by the LCLC Clearwater Seafoods Arena last nigh to watch the South Shore Lumberjacks take on the Pictou County Weeks Crushers. In an entertaining matchup, the Crushers defeated the local Lumberjacks, 3-1.

NFL PLAYOFFS ON THE MIND TONIGHT
With the tournament set to start tomorrow, Team USA looks to keep things light tonight by taking in the NFL playoff games, particularly the matchup between the Green Bay Packers and Arizona Cardinals. Led by head coach Jeff Sauer and team doctor Mike Uihlein, both of whom are from Wisconsin, the Packers will have more than a few fans here in Bridgewater.

The U.S. National Sled Hockey Team arrived safely in Bridgewater, Nova Scotia, for the World Sled Hockey Challenge that is set to begin Sunday (Jan. 17). The tournament is Team USA's first of the 2016 campaign and will see them defend their title from 2015 against Canada, Korea and Russia.

LUNENBURG COUNTY LIFESTYLE CENTRE
The 2016 World Sled Hockey Challenge is being staged at the Lunenburg County Lifestyle Centre. Within the facility is the LCLC Clearwater Seafoods Arena, which boasts a full NHL-size ice surface and the capacity to seat up to 1,200 spectators.

VISIT FROM THE ROYAL CANADIAN AIR FORCE
At the conclusion of practice yesterday, Honorary Colonel Dan Hennessey and several other members of the Royal Canadian Air Force visited the Team USA locker room where they shared their passion for hockey and expressed their gratitude at the players' dedication to the sport.

SPUDS THE DEVIL
Prior to the team's trip to Canada, Team USA alternate captain and New Jersey native Josh Pauls was fortunate to meet several members of the New Jersey Devils during the team's visit to St. Louis. The meeting, arranged by Devils broadcaster, Sherry Ross, included tickets to the game, being a second intermission interview guest and the opportunity to meet several Devils players after the game. Among the players Pauls met was Kyle Palmieri, who helped the U.S. National Junior Team to a pair of medals at the World Junior Championship, including gold in 2010 and bronze in 2011, and Cory Schneider, who helped Team USA to a silver medal at the 2004 IIHF Under-18 Men's World Championship and was later named the David Peterson Goalie of the Year by USA Hockey.