Sept. 1, 2015 | More than 40,000 spectators, plus a national television audience, watched the Little League World Series this past Sunday on a glorious afternoon in Pennsylvania. There were smiles, cheers, entertainment and the noticeable absence of demand for those 12- and 13-year-olds to pitch from 60 feet, six inches or run 90 feet between the bases like their professional baseball heroes.

Right-sized baseball and softball fields, along with age-appropriate rule modifications, have been accepted wisdom in youth baseball for more than 50 years.

Coincidentally, while Little League was paring to its finalists, U.S. Soccer announced a nationwide initiative to improve youth skill development. The centerpiece was a shift to small-sided game formats and field sizes to be phased in across the country by August 2017. As part of the new plan, American soccer at U6, U7 and U8 will be played 4v4 on a pitch approximately one-eighth the size of an adult soccer field. Nine- and 10-year-olds will play 7v7 on a one-quarter-scale pitch. Not until age 13 will players begin competing 11v11 on a regulation adult-sized pitch.

“Our number one goal is to improve our players down the road, and these initiatives will help us do that,” said Tab Ramos, U.S. Soccer’s youth technical director. “In general, we would like for players to be able to process information faster, and when they are in this (new) environment, they are going to learn to do that. Fast forward 10 years, and there are thousands of game situations added to a player’s development.”

With this change, American soccer will join sports like baseball, basketball, hockey and tennis, all of which have embraced the skill-development benefits of age-appropriate playing dimensions and competition formats (see chart below).

Those benefits are at the core of USA Hockey’s American Development Model, which was recently praised by the Sports Business Journal as a “trailblazing program.” 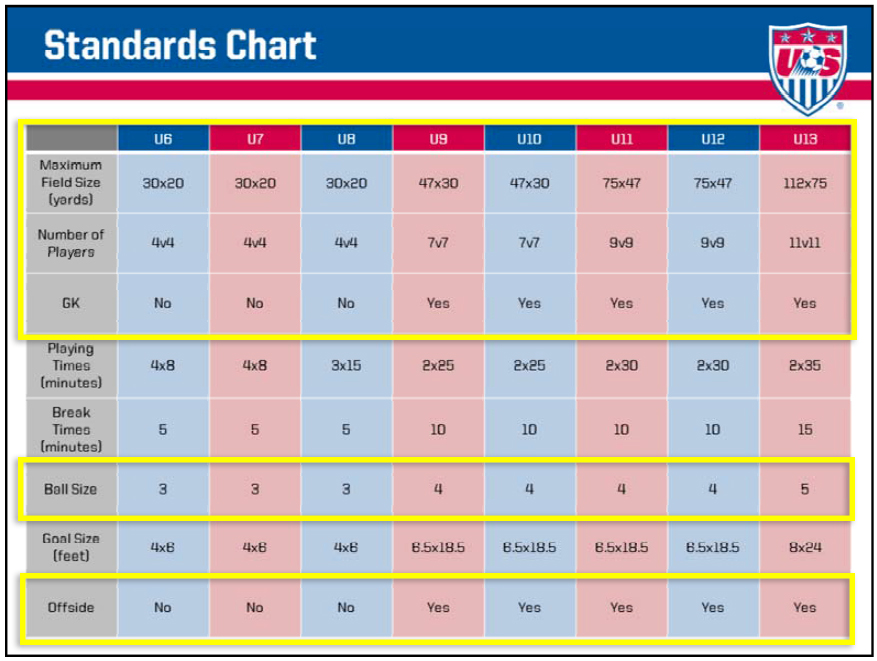