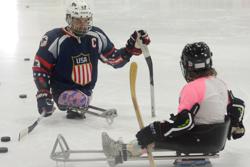 Both helped Team USA claim gold last season at the 2015 IPC Sled Hockey World Championship, but Sunday night was not about them. Instead, the focus was on those who are excited simply for the opportunity to get out on the ice.

On Aug. 23, Sweeney and McDermott hosted a free introductory sled hockey clinic at the Winterhawks Skating Center in Portland, Ore., to give participants with physical disabilities a chance to try the sport.

The clinic was largely about getting individuals out onto the ice and accustomed to moving around on the slippery surface. The sensation brought broad smiles and whoops of joy, as Sweeney and McDermott weaved through the crowd offering tips on how to move the sled or shoot the puck.

Among the almost 40 participants were Bruce and Kate Pritchard, two people who have built a hockey family. Bruce grew up on Vancouver Island and played semi-pro hockey with the Victoria Cougars in the mid-1980s. He now coaches a Bantam AA team in the Junior Winterhawks league.

The Pritchards’ son, Chris, is a goalie with the Eugene Generals of the Northern Pacific Hockey League. At the clinic, their daughter Kate got a chance to take the ice — a prospect that drew a thumbs up and a smile from the shy 16-year-old.

“We are a hockey family, so she has been at the rink since she's had a binky in her mouth,” Kate said. “She's been wanting to play, so we jumped at this chance.”

She wasn't the only one excited for Sunday’s free clinic, as the line stretched out the door with many athletes making the transition from wheelchairs to sleds.

“It provides a team atmosphere and gets people with disabilities out there with other people,” Bruce said. “This is a way for her to get out on the ice with a stick in her hand.”

Sled hockey was developed in Sweden in the 1960s as a way to allow those with physical disabilities to pursue their love of hockey. Players propel themselves along the ice using a modified hockey stick. It’s basically cut in half, with an ice pick on one end to scoot along the surface and the blade at the other end to control the puck.

“I can't imagine the upper-body requirements it takes,” said Stephen Boesch, a coach in the Winterhawks high school league, who was on hand to volunteer at the event. “This definitely shows that there is an interest in sled hockey here.”

The sport has taken root in the East Coast and Midwest, but has been slower to reach the West, although teams have formed in San Diego and Los Angeles.

Sweeney, who moved to Portland last year, is a big part of that movement to introduce the sport to new skaters.

An alternate captain on the 2014 U.S. Paralympic Sled Hockey Team, Sweeney scored the winning goal against Russia in the gold-medal game of the 2014 Paralympic Winter Games in Sochi, Russia. A recipient of a Purple Heart while serving in the Marines, Sweeney went on to become the winner of the inaugural Pat Tillman Award for Service at the 2014 ESPYS.

“He has been a phenomenal spokesman for the sport,” said Kellie Hays, a disabled hockey representative for USA Hockey. “He's been a spark, and we're expecting really big things.”

Sweeney’s hopes of forming teams in the Northwest may soon become reality thanks to his growing relationships with the Portland Winterhawks, the NHLPA, and the support of USA Hockey National Sled Team sponsor, Labatt Blue, and their ‘Pass It Forward’ initiative, which has identified Sweeney’s ambitions as one of ten recipient programs to receive a portion of the $250k they are donating to expand sled hockey’s growth.

The attempt to bring sled hockey to the West Coast is already gaining attention – including that of Kaleb Kallappa, a U.S. Paralympic Track and Field Trials participant, who discovered the sport earlier this summer in Seattle and was in attendance at the clinic.

“I always like trying new sports, but the biggest thing is to have fun and listen to your coaches,” Kallappa said.

The college student competed at the U.S. Paralympic Track & Field Trials in 2012, just missing the cut in the 800- and 1,500-meter events. He’s also an active basketball player, which has helped him make the transition to the ice.

“The sports are really similar in the way you keep the floor spread and the way you move the puck,” Kallappa said.

Even with almost 50 years of involvement in hockey, you can’t plan for the current state of the world and the impact coronavirus has had on our game. I think it is safe to say that nothing prepares you for the changes that have taken place in our daily lives and the uncertainty of when things might return to normal. Or in this case, what will become the new “normal.”

Our expertise is hockey, so what we’ll address in this piece: the impact of the global pandemic on our game and how likely it will affect our game in the immediate future.

USA Hockey continues to post information on COVID-19 on the main website. These updates keep our membership informed of specific programs and the changing safety recommendations that will be in place when hockey returns. Be sure to check back regularly for updates and other hockey information.

On the officiating front, much of what we are able to do from a program standpoint is connected to player events like national tournaments and player development camps. As you know, the national tournaments (along with the March, April and May IIHF World Championship events) were cancelled. The Officiating Program then canceled our two instructor training programs that were planned for late April and early May in Lake Placid, N.Y., and Colorado Springs, Colo.

At this time, details for any potential summer development camps are still being determined. On the player side, several camps we are connected to were cancelled, and the few camps that are still in planning have been dramatically downsized. The Officiating Program continues to monitor the decisions made for players and will take advantage of any opportunity we have to salvage our summer camp program and maximize participation.

The good news is, we are confident we will have a 2020-21 season. All indications show no reason to delay registration. It will open as scheduled on or around May 26, followed by the open book exams and online seminar curriculum on June 1.

SafeSport Training (required for anyone born in the year 2003 or earlier) and background screening (learn about the new national level screening program in the Q & A section) will also be available to complete at that time. If COVID-19 still has things slowed down in early June, it would be an ideal time to get these requirements completed.

The biggest unknown will be the timing in which we will be able to conduct seminars. The vast majority of rinks are currently closed, and many of them took this opportunity to remove ice to save operating costs and do maintenance. There is now doubt they will be prepared to quickly ramp up once they are allowed to do so, but as with most everything right now, the timing is uncertain. As a result, some of the earlier seminars may be pushed back a few weeks. The District Referees-in-Chief will secure ice times and facilities so we can provide seminar dates and locations as quickly as possible. We are also encouraging our instructors to think outside the box by providing some weeknight seminar options, and to look at other ways to best meet the needs of our members.

The Advanced Officiating Symposium, scheduled for Providence, R.I. in late July, is still going to plan. We will continue to monitor the situation, including local restrictions and travel advisories in the coming weeks, and we will announce any changes in advance to allow for alterations to travel arrangements. Click here for up-to-date information or to reserve your seat at the 2020 Advanced Officiating Symposium.

These are difficult times for everyone, and although our hockey family is important to us, it is a small fraction of the big picture that is impacting our daily lives. To quote Andy Dufresne in his letter for Red that he left under the big oak tree in The Shawshank Redemption: “Hope is a good thing, maybe the best of things, and no good thing ever dies.”

We hope you and your loved ones are safe and healthy. We hope the coronavirus is conquered with minimal loss of lives and a return to a prosperous normal as soon as possible. We hope your passion for the game of hockey will only grow as a result of its absence. We hope we are back on the ice in the coming months and that the 2020-21 season will be our best yet.

Thank you for your continued support of USA Hockey and don’t hesitate to contact us if there is anything we can do to make your hockey experience a better one. In the meantime, stay safe, stay healthy and be prepared to be back on the ice soon.

Why must officials be screened?
Per USA Hockey and USOPC policy, all coaches, officials, board members, employees, volunteers, billets and anyone else who will have regular contact with, or authority over, minor athletes are required to submit a background screen before any contact with minor athletes.

Who is required to be screened?
Officials who are 18 years-old (or older) prior to June 1 of the current year.

Any official, 18 years-old (or older) without a completed valid background screen (national or USAH Affiliate coordinated) after April 1, 2019.

How can members complete their required background screen?
A link to submit for screening will be included in your membership registration confirmation email and posted in the drop-down menu under the OFFICIALS tab at USAHockey.com.

Background screens through NCSI under the national program will cost $30 for all domestic screens. For international screens (members who have lived outside of the U.S. for six consecutive months in any one county during the past 7 years) the flat rate fee is $150. If that country is solely Canada, the flat rate fee is $75.

Where can members go with questions about the national background screen program?
Please refer to the USA Hockey Background Screen webpage at USAHockey.com.