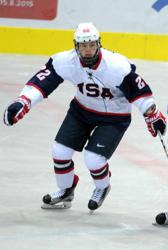 “I’m proud of the way our guys competed today,” said Derek Plante (Cloquet, Minn.), head coach of the 2015 U.S. Under-18 Select Team. “Unfortunately, special teams cost us the game. We couldn’t capitalize on our power play opportunities, and Russia did. The players did everything we asked them to, we just couldn’t put the puck in the net.”

Russia opened the scoring at 16:11 of the first period with a slap shot from the blue line on the power play.

The U.S. evened the score with :15 to play in the opening period to send the game into intermission knotted 1-1. Casey Mittelstadt (Eden Prairie, Minn.) received a pass from Andrew Peeke (Parkland, Fla.), rushed into Russia’s zone and threw the puck into the crease from behind the net, where it hit off a Russian defenseman’s skate and redirected into the goal.

Team USA had a chance to pull ahead 1:11 into the second period when Patrick Harper (New Canaan, Conn.) was awarded a penalty shot after being tripped on a breakaway, but Russian goaltender Vladislav Sukhachev denied him. Russia was given a penalty shot opportunity of its own minutes later, but Dayton Rasmussen (Eden Prairie, Minn.) made the stop.

Russia scored two quick goals in the closing seconds of the second period, including a power-play tally at :20 and a wrister at :04, to pull ahead 3-1 heading into the final frame.

At 1:44 of the third period, Georgia Ivanov scored a backhanded-goal to lengthen Russia’s lead. However, the U.S. responded less than two minutes later with a power-play goal when Kailer Yamamoto (Spokane, Wash.) buried the puck glove-side off a feed from Samuel Rossini (Inver Grove Heights, Minn.) to make it 4-2.

Russia tallied its third power-play marker of the game with 12:38 on the clock to account for the 5-2 final.

Notes: Rasmussen finished the game with 18 saves for Team USA … Today’s game statistics are available here … The U.S. is competing in Group B along with Slovakia, Finland and Russia … To see information on the U.S. Under-18 Select Team, including schedule and results, click here … For more information on the 2015 Ivan Hlinka Memorial Cup, click here … Join the conversation on Twitter and Facebook using #HlinkaMemorial.