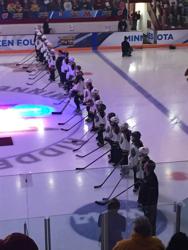 That community spirit was on full display in March when the girls of Mounds View Irondale (MVI) took the ice together at the NCAA Women’s Frozen Four in Minneapolis as part of pregame ceremonies.

The occasion came about because of MVI’s strong turnout in previous opportunities extended by the University of Minnesota women’s hockey program.

In MVI’s first year, its two 8U teams played between periods at a Golden Gophers game.

When a return trip was arranged with MVI level coordinator Shari Kunza during the regular season this year, a bigger effort was made to promote the visit to a major college women’s game. More than 200 people associated with the MVI program attended, leading to the special invite to be part of the postseason.

Kunza played a hunch when asked to participate in Frozen Four festivities and asked to be part of the national championship game, counting on the Gophers to be there. She committed to tickets for the association’s girls and families and wound up having to scramble to find more as the day approached.

With Irondale High School graduate Meghan Lorence scoring a goal for the Gophers, Minnesota defeated Harvard University 4-1 to win its sixth national title, adding to the memories of a special night for the MVI Hockey group.

Two associations that are in the same school district in the northern suburbs of Minneapolis-St. Paul — and were together as Lake Region Hockey before splitting decades ago during a growth period — determined in 2013 that it was time to work together again.

“A new and stronger identity is being built,” Kunza said. “We are promoting good sportsmanship and acceptance of former rivals.

“We are promoting that together. We are stronger.”

Kraetsch, the girls’ coordinator at Mounds View, and Kunza, Irondale’s then coordinator, worked together on the agreement. It became the model when the youth associations followed a year later.

“We went into it with a spirit of community building, first and foremost,” Kraetsch said. “At the end of the day, what we’re trying to do is provide a stable place for girls to play hockey.

“A lot of co-ops go year-to-year. We knew there could be a lot of growing pains. We went into it as a two-year agreement with the hope that by the third year, it would be a natural partnership that would go on.”

The program grew from 90 players in the first year together to nearly 150 girls this season when MVI had two teams each on the 14U, 12U and 8U levels, and three on the 10U level.

Kraetsch said other girls’ co-ops are also seeking to use their approach as a model.

“We think after the second year, a lot of the big bumps — parents getting to know each other, kids getting to know each other — we’ve been able to work through that,” she said. “I think word has gotten out that it is a stable program now, everybody’s welcome and I think with the combined efforts now, we’re able to do a lot more recruiting for beginning players, which has definitely helped at the younger level.”

The various recruiting efforts have been helped by the success and ongoing commitment to being one community.

“It’s not hockey utopia, but I think in general, kids are benefitting,” Kraetsch said. “I think, from the outside, when people see that kids are thriving, they want to be a part of it.”

The growth in numbers of the program and the strong turnout on previous youth nights with the Gophers contributed to a special opportunity. The MVI players and coaches lined up on the ice and were facing the teams as they took the ice. The girls remained there for the playing of the national anthem.

“The best part on the ice at the Gopher game was watching the players being announced and seeing the cool lights,” said 10-year-old Maddie Kunza, Shari’s daughter. “I hope I will become a Gopher player someday.”

The parents and coaches enjoyed watching the reaction of their youngsters to being part of a major event.

“The Gophers did a very nice job,” Kraetsch said. “Their event staff is great. For me as a coach and a former player, that’s the closest I’m ever going to get to a national championship.

“The atmosphere in that building; I can’t really describe it.”