Fourteen New Jersey-born skaters have played in the NHL, with Calder Trophy finalist Johnny Gaudreau the most recent Garden State export, but if the New Jersey Devils have their way, more will arrive soon.

That, in part, is the mission of a new youth hockey initiative the Devils launched last week, in partnership with USA Hockey and its Atlantic Affiliate. The initiative formally kicked off Saturday with an American Development Model clinic for 8U, 10U and 12U players at AmeriHealth Pavilion, the Devils’ sparkling practice facility at Prudential Center.

Demand for the event ran hot, with 135 players registered in less than 36 hours and a waitlist for nearly 70 more. Atlantic Affiliate volunteers managed the registration process and coached parents on the benefits of age-appropriate, age-specific training. The fortunate 135 arrived Saturday to a fresh sheet of ice reflecting New Jersey’s Stanley Cup championship banners and a new opportunity for New Jersey youth. Atlantic Affiliate coaches, with help from Devils alumni Grant Marshall, Bruce Driver, Ken Daneyko and Colin White, then divided the rink into stations and led an up-tempo skills clinic.

“It was an awesome event,” said Ali Herzog, whose son, Alex, skated with the 10U flight. “The whole thing was like clockwork and the setup was terrific. They had the ice split into stations, with something different in every one, and two coaches for every group of five or six kids. There was no standing around. No waiting in lines. As a parent, you could see the drills and what the kids were learning, but they were having fun doing it.”

Afterward, as Ali left the rink, Alex was already lobbying to attend the next Devils ADM clinic.

“He had the greatest time,” she said. “And I thought it was great, too. With the stations, there’s benefit for all ages, but especially for young kids. It’s so much better than other clinics we’ve done.”

The Devils alumni liked it too. A two-time Stanley Cup champion, Marshall saluted the youth coaches for their progressive, constant-improvement mindset. He also helped them run a small-area ringette game that put him in the midst of the action.

“It’s different for me, growing up on full-ice hockey, but it’s fun and you can see the focus on skills and how they can really hone those skills using a smaller surface. It’s more efficient to do that work in a small area. And even in a little game like ringette, I noticed that I could really work on using my torso and my body positioning differently.”

From Marshall’s perspective, the Atlantic Affiliate youth coaches play a huge role in a reinvigorated partnership that will pay sizable dividends throughout the state.

“The coaches work extremely hard and think outside the box to bring up the level of the game with these kids,” he said. “And it’s growing tremendously in New Jersey because we have good coaches, passionate coaches and they want to learn and get better. They’re always learning and that’s why the game has grown and why it will continue.”

The Devils, meanwhile, are eager to help lead the progress. Events like this are only the beginning.

“Saturday’s clinic was a great example of two dedicated organizations, the New Jersey Devils and USA Hockey, partnering to give youth hockey players a world-class experience,” said Andy Gojdycz, New Jersey Devils and Prudential Center hockey director at AmeriHealth Pavilion and USA Hockey Atlantic District associate coach-in-chief. “ADM continues to be the standard for player development and its benefits were on full display this weekend. The kids were engaged, with big smiles on their faces, and they had ample opportunity to work on skills with some of the top youth coaches in the country and a number of Devils legends. The morning was efficient, fun and competitive, which is a great combination for young players.” 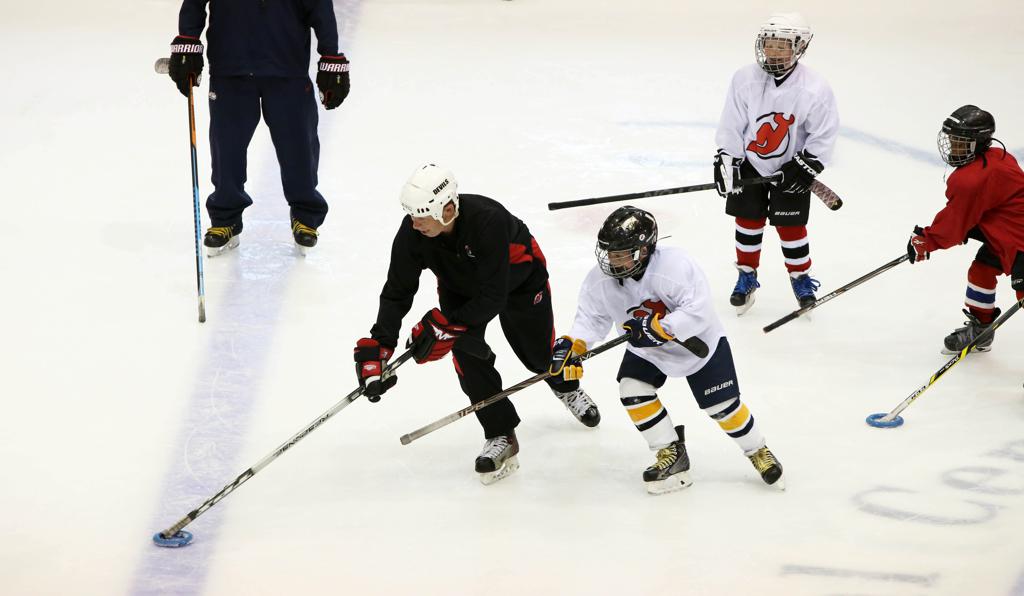