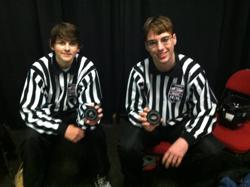 Two teenagers wait outside the locker room in the cement concourse at PNC Arena, eager for the chance to meet four professional idols. The door opens, and they are invited to enter.

“Come on in,” Pierre Racicot said, before putting the nervous visitors at ease with a well-timed joke:

“It doesn’t smell that good.”

Matthew Filer, 17, and Holden Rogers, 15, didn’t seem to care. As they entered the cramped space, accompanied by typical locker-room aroma, the Raleigh residents were introduced to four NHL on-ice officials preparing to judge the Feb. 20 match between the Toronto Maple Leafs and host Carolina Hurricanes.

On a padded folding chair in the far corner sat Racicot, a linesman. Next to him was referee Kelly Sutherland. To his right, along the adjoining wall, were veteran linesman Shane Heyer, who interjected frequently during the near 15-minute impromptu Q&A session, and rookie referee Graham Skilliter, who mostly sat silent.

The talk covered a wide range of insider topics.

“That was amazing,” Rogers said afterward.

As part of its Hockey Weekend Across America campaign, USA Hockey staged a “Meet the NHL Officials Program,” and Filer and Rogers were selected from the region’s ranks of rising junior-level referees. The concept was to give youngsters the experience of being an on-ice official on NHL game day.

“This is the big leagues,” Filer said, looking around prior to taking the ice for the NHL pregame skate.

After dressing in a separate room, Filer and Rogers accompanied the officials down the corridor, under a red canopy and onto the ice surface, surrounded by NHL players blazing by, creating practice passes and taking shots on goal.

Afterward, still grinning, the two aspiring officials spoke of what it was like to skate alongside the ‘Canes and Leafs.

“I was definitely nervous,” Filer said. “I didn’t want to run into any players.”

Rogers had his own concerns: “I didn’t want to fall down.”

Rogers started officiating six years ago, when he was 9 years old. Filer is holding a whistle for his fifth season. The duo previously officiated junior matches together and generally work weekends in the Raleigh, Cary and Wake Forest areas, they said.

A senior in high school, Filer will attend North Carolina State next fall to study engineering and “minor” in officiating.

Holden is a sophomore and already certified as a Level 3 official. Next season he will attempt to qualify as a Level 4.

After the pregame skate and standing with the officials during the American and Canadian national anthems, the NHL officials handed Filer and Rogers each a ceremonious puck following a center-ice huddle.

To cap the experience, Filer and Rogers and their families watched the Hurricanes edge the Maple Leafs, 2-1.

Setting the tone for the pregame Q&A season was Heyer, who explained the reason individuals such as himself become on-ice officials.

“We’re all frustrated hockey players,” he said with a laugh.

The professionals then shared some of their experiences and offered advice:

“That’s happened to me,” Rogers said.

And to gain experience, an officiating prospect must excel at each level: juniors to college to minor leagues, like the AHL and ECHL.

The sponges on Friday night in the cramped, aroma-filled locker room were the two wide-eyed teenaged officials.

“They gave us a glimpse of what they do,” Rogers said. “Maybe one day, I’ll be lucky enough to do that.”

Week-long event celebrates all levels of the game

Week-long event celebrates all levels of the game