Brandt, Cameranesi, Carpenter, and Coyne are among the top players in college hockey this season.

An award of The USA Hockey Foundation, the Patty Kazmaier Memorial Award is presented annually to the top player in NCAA Division I women’s ice hockey.

Together, Hannah Brandt, Dani Cameranesi, Alex Carpenter and Kendall Coyne make up a foursome that represents a wave of high-scoring young forwards in women’s college hockey.

All four came up through USA Hockey’s Women’s National Under-18 Team, with three earning U18 gold medals. Two were members of the U.S. Olympic Team that won silver at the 2014 Winter Games in Sochi, Russia. And all four were on the U22 American team that swept a three-game series from Canada in 2014.

In addition, they come from Massachusetts, Illinois and Minnesota.

Each player is expected to be a candidate for the Patty Kazmaier Award that will be given out in late March to the nation’s most outstanding player. Brandt was one of three finalists for the award last season.

A closer look at the four: 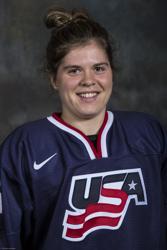 From her first game as a freshman, Brandt has been one of the nation’s most dangerous scorers. She scored three goals in her debut and then had two goals and four assists in her second game.

Her 82 points were No. 2 in the country in 2012-13 and she was second again nationally in 2013-14 with 65 points. This season, she’s second only to Carpenter, with 57 points in 28 games for a Minnesota program that has won two of the past three NCAA championships.

“She shows up each season having added to her hockey arsenal,” said Carey.

It’s an assessment shared by Minnesota coach Brad Frost. He said Brandt has worked to increase her speed and her all-around game. Now she wins more races to the puck and every game makes a difference in multiple ways.

“She’s more confident, quicker and really leading the team in every aspect: offensively, defensively, on the power play and penalty kill,” Frost said. “Her game has definitely taken another jump.” 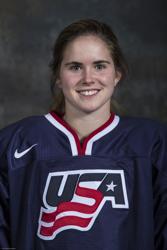 She ranks fourth in the nation this season with 47 points (17 goals), and her points per game average has almost doubled from her first season (0.88 to 1.68).

“Her ability to compete with the best players in women’s hockey, as a sophomore, is telling of her skill,” said Carey.

She was selected National Rookie of the Year by the Women’s Hockey Commissioner’s Association and now has taken her game to a new level. She’s had some big games, including three-goal sprees in wins over the University of Wisconsin and Minnesota State University, Mankato, and a six-assist night against St. Cloud State University.

In the offseason she worked too improve her stick-handling and shooting.

“That was one area of my game that I thought was a little weaker and I needed to improve on,” she said. “So I still continue to work on that today in practice and after practice. … I strive really hard to work on my weaknesses.”

Said Frost, recently: “She is probably our most consistent player, night after night. Whether she scores or not, you notice her each and every shift.” 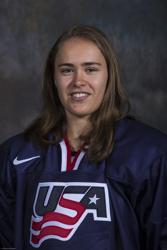 Carey calls Carpenter — who took last season off to play on the U.S. Olympic Team — “a dominant, unmatched competitor.”

After compiling 40 points as a freshman and 70 as a sophomore, she leads the nation with 61 (including 27 goals) in 24 games. She’s averaging a nation-best 2.54 points per game (far better than her 1.89 as a sophomore) and has five game-winning goals.

The daughter of longtime NHL standout Bobby Carpenter, Alex (short for Alexandra), has long been known as a terrific offensive player. In high school in Massachusetts she had 427 points in 100 games.

And at the Winter Games, she led Team USA with four goals. In August, she was a force in the U22 sweep of Canada, scoring the game-tying goal in Game 3 and then going 2-for-2 in an overtime shootout.

Now back in Boston, her return has added extra firepower to a top-ranked and undefeated Eagles team.

“Alex is the kind of kid who is never going to stop trying to get better,” Boston College coach Katie King Crowley said recently. “She has that drive that you see [in] few and far between.” 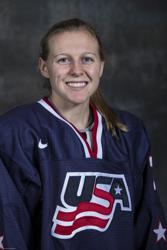 Like Carpenter, Coyne was on the U.S. Olympic Team.

Coyne, one of the fastest forwards in the nation, is also among the most experienced. She’s been on two U.S. world championship teams (2011 and 2013) to go with her Olympic experience.

“She has the unique ability to maintain her offensive skill while maintaining top speed,” Carey said. “Her abilities make the teammates around her better.”

She is sixth in the nation in scoring, with 20 goals and 16 assists for 36 points. She also leads the nation in short-handed goals, with three in 22 games.

Coyne had 45 points as a freshman and 68 as a sophomore when she was a top-10 finalist for the Kazmaier Award.

Coyne was elected a team captain this season. Her highlights include a pair of hat tricks. In January, Coyne took the puck the length of the ice to score a game-tying goal against Connecticut, a highlight that put her in the top 10 plays of the day on ESPN’s “SportsCenter.”