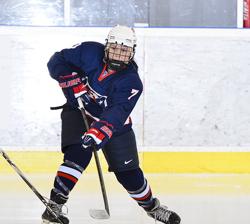 Jincy Dunne still remembers the disappointment she and her teammates felt in Finland almost two years ago. The U.S. Women’s National Under-18 Team went into the final game of the 2013 IIHF U18 Women's World Championship undefeated and unscored upon. Heading into the gold-medal game against Canada in early January, the U.S. was 4-0 and had outscored opponents 35-0.

The Americans took a 1-0 lead in the first period and then turned away every Canadian threat — until their rivals evened the score with 12 seconds left in regulation. In overtime, Canada scored a quick goal to win, 2-1.

Though the U.S. had been dominant, it came away with a silver medal.

Earlier this year, the U.S. again went 4-0 in the U18 World Championship in Hungary to make the finals against Canada but lost 5-1.

“It’s been very frustrating,” said Dunne, 17, a member of both teams. “The first world championships we were winning and we put ourselves in a position to win and came up short. And in Hungary it was just frustrating because as a team we all agreed we didn’t play as well as we could have.

“But now we’re ready to go win a gold medal in Buffalo.”

Dunne, a defenseman, has gone from the youngest member of that 2013 tournament to the most experienced player on this U.S. Women’s National U18 Team that will play at the HARBORCENTER in Buffalo, N.Y., at this year’s U18 World Championship in January.

In this edition, the U.S. gets its archrival immediately, facing Canada on Jan. 5, followed by games vs. the Czech Republic (Jan. 6) and Russia (Jan. 8). The gold-medal game is scheduled for Jan. 12 and the U.S. is striving to be there once again.

Dunne not only is the only player on this roster back for her third U18 World Championship, but she also is the only player who’s been with the senior national team. She was part of the final group in contention for the 2014 U.S. Olympic Team earlier this year but wasn’t selected. She also was on the U.S. senior team at the Four Nations Cup in 2012 and 2013.

Because of her talent and experience, Dunne is going to be counted on to be one of the team’s leaders. She’s comfortable in that role.

“This is my third one, so I’ve got experience,” she said of the U18 World Championship. “I know what to expect. And getting a chance to play with the national team, there are some fantastic leaders on that team, and I was able to learn from them and see how they did things. I try to bring those things back to the younger team so they can get a sense of how the national team does it.”

She sees her role as leading “by actions and attitude.”

“They’re always encouraging their teammates, building people up, serving their teammates, doing what they can to help out,” she said of the senior national team veterans. “And a leader really shows when things are tough, this is going to be somebody to stand up and get the team going.”

Dunne’s contributions include being a terrific defenseman and playmaker. U18 coach Joel Johnson calls her “a world-class talent.”

“Jincy is perhaps one of the most dynamic hockey players in the world at her age, and she’s got all kinds of skill and ability that is just God-given,” Johnson said. “And she’s extremely humble. She has a very balanced look on life, which I think is something that helps her on the hockey rink.”

Reagan Carey, director of the women’s national program for USA Hockey, says Dunne’s poise and skill on defense are a big plus.

“It’s always a good thing to know she’s back there and can control the situation,” Carey said.

“I’ve told her I want her to make her mark on this tournament,” he said. “I want this to be the tournament that people look back and remember, that Jincy Dunne was one of the best players, if not the best player, on the ice.”

In the 2013 U18 World Championships, she had seven points (two goals, five assists) in five games and was tied for the team lead with a plus-11 rating. In the 2014 tournament she was named the best defenseman and selected as one of Team USA’s three best players in the event.

Dunne looks at this particular U.S. team and believes it can win.

This will be the last U18 tournament for Dunne, a senior at Fulton School in St. Albans, Mo. After graduating, she’ll join her older sister, Jessica, at Ohio State University.

Manages the day-to-day relationships with corporate and licensing partners