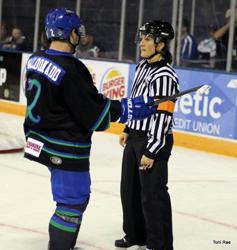 Katie Guay and Erin Blair have officiated women’s hockey matches on the game’s biggest stages, including the International Ice Hockey Federation Women’s World Championships and the Olympic Winter Games. However, Guay and Blair recently got an opportunity few female referees ever have: the chance to call a men’s professional game.

In partnership with USA Hockey, Guay and Blair were the referees in a Southern Professional Hockey League game on Friday in Columbus, Ga., that featured the Columbus Cottonmouths hosting the Fayetteville FireAntz. The referees were a part of the Cottonmouths’ “Hockey & Heels” promotion designed to bolster the team’s female fan base. Along with Guay and Blair serving as the game’s referees, Cottonmouths backup goalie Shannon Szabados — a two-time Olympic gold medalist for Canada — got the start in net and recorded her first professional victory as Columbus won 5-4 in overtime.

“I was really excited when I got called about this,” said Guay, who has been selected to officiate the IIHF Women’s World Championships in Sweden in 2015. “I thought, ‘What a great opportunity.’ Chances like this don’t come around too often.”

Blair — who was a referee at the 2014 Winter Games in Sochi, Russia — said she saw officiating a men’s professional game as a chance to blaze a trail for other female officials.

“I was happy when I got the call,” said Blair, who hails from Lisle, Ill. “I got the chance to work at the Olympics, and that’s sort of the pinnacle for officiating in women’s hockey. I think this will open doors for other female officials. I’m actually closer to the end of my career, but I’m excited about taking the opportunity to open doors for others. There are so many girls who would not only do well but thrive in this environment. I wanted to take advantage of this opportunity and do a good job.”

Blair and Guay got an early lesson on the difference between the women’s and men’s games as there was a fight just 2:18 into the game. However, neither official was fazed by the men’s game.

“Their game is just like the women’s game,” Guay said. “They’re very fast, but they’re quite physical, too. When they dropped the gloves early, that was a bit of an eye-opener, but other than that, it was just another game of hockey. The players didn’t treat us any differently. They gave it to us like we were regular league officials. There was no holding back on their part.”

Blair, who calls men’s club hockey in Illinois, said the game wasn’t too different speed-wise from a U.S.-Canada women’s game.

“It was fun, but once we got going, it was just another hockey game,” Blair said. “The speed of the game wasn’t any faster than a U.S.-Canada women’s game. Obviously, the women aren’t as physical, but hockey is hockey. There are things you can do and things you can’t do. I don’t think it was any faster than the women’s game. It just had the added physical element is all.”

SPHL Director of Officiating Mark Faucette and league president Jim Combs were on hand to watch Blair and Guay work, and Faucette came away impressed.

“Overall, I felt like they did an excellent job considering this was their first pro game,” said Faucette, who called 918 regular-season and 72 Stanley Cup playoff games in the National Hockey League. “I was very surprised by their ability to control the game out there and their effort. They definitely had a presence out there.”

Cottonmouths coach Jerome Bechard — who signed Szabados in the spring of 2014 after she backstopped Canada to an Olympic gold medal for the second time in four years — was impressed by Blair and Guay’s work.

“I thought they did unbelievably,” said Bechard, who is in his 11th season as coach of the Cottonmouths. “They had more presence out there than some of the male referees in our league do. They didn’t take any crap off of anybody. I thought they called a great game.”

Bechard also gave them the ultimate compliment a coach can give a referee when he said, “They weren’t a part of the outcome of the game and they called what was supposed to be called.”

Getting Open: 4 Tips from an NHL Skills Coach