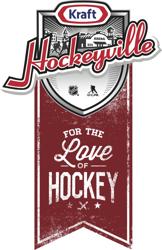 USA Hockey announced today the addition of Kraft Foods as an official sponsor of the organization.

The multi-year agreement is highlighted by USA Hockey’s support of the award-winning KraftHockeyville program, which is launching in the United States on Jan. 1, 2015. Kraft Hockeyville will give hockey towns in the U.S. a chance to enter to win a $150,000 arena makeover courtesy of Kraft, have an NHL preseason game played in its local arena that is showcased on TV, and earn the title, “Kraft Hockeyville” for the year.

In addition, Kraft will be designated as the presenting sponsor of USA Hockey’s highly successful national Try Hockey for Free Days, the first for the 2014-15 season which is set for Nov. 8.

“Kraft is home to some of the most beloved and iconic brands in the food and beverage industry and we’re thrilled to have them as a partner,” said Dave Ogrean, executive director of USA Hockey. “We look forward to a mutually beneficial relationship and appreciate their desire to be part of our efforts to help to continue to grow and advance our sport.”

Kraft will also be designated as a “Proud Partner of USA Hockey Families.”

“Hockey arenas, like all local sports facilities, are gathering places for communities; places where kids go to learn, play and compete,” said Dino Bianco, Executive Vice President and President, Kraft Beverages. “USA Hockey is a tremendous partner helping us to earn a place in our consumers’ lives by forging meaningful family connections and celebrating the spirit of amateur sports.”

ABOUT USA HOCKEY
USA Hockey Inc., founded on October 29, 1937, and headquartered in Colorado Springs, Colo., provides the foundation for the sport of ice hockey in America; helps young people become leaders; and connects the game at every level while promoting a lifelong love of the sport. More than one million strong, including players, coaches, officials and volunteers that span all 50 states, USA Hockey is the National Governing Body for the sport in the United States and has important partnerships with the National Hockey League, United States Olympic Committee and International Ice Hockey Federation. For more information, visit usahockey.com.

Kraft Foods Group, Inc. (NASDAQ: KRFT) is one of North America’s largest consumer packaged food and beverage companies, with annual revenues of more than $18 billion.  With the spirit of a startup and the soul of a powerhouse, Kraft has an unrivaled portfolio of products in the beverages, cheese, refrigerated meals and grocery categories. The company's iconic brands include Kraft, Capri Sun, Jell-O, Kool-Aid, Lunchables, Maxwell House, Oscar Mayer, Philadelphia, Planters and Velveeta. Kraft’s 22,500 employees in the U.S. and Canada have a passion for making the foods and beverages people love.  Kraft is a member of the Standard & Poor’s 500 and the NASDAQ-100 indices.  For more information, visit www.kraftfoodsgroup.com and www.facebook.com/kraft

QUESTION: If you have a player with a suspension, and you tell the referee to record it on the scoresheet before a game because the player is sitting out, but the referee comes over before the game a tells you he talked to the league and said he can play what should you do?

ANSWER: All suspensions and other forms of discipline are managed by the local USAH Affiliate of the team, and referees cannot determine player eligibility. Ultimately, it is the responsibility of the Team Coach to make sure players serve their suspensions. Therefore, it would be wise to receive any disciplinary notice from the local Affiliate first-hand.

QUESTION: A player is in the penalty box serving a minor penalty. Play continues 5 v. 4 while the player complains about the call. Play is stopped when the referee assesses the penalized player a second minor penalty for Unsportsmanlike Conduct. Should two minutes be added to the time remaining on the scoreboard for the player's first penalty, or should a second penalty be placed on the scoreboard with play then continuing "5 v. 3"?

ANSWER: In this situation, the same player earned both penalties. Therefore, two minutes must be added to the remaining time on the player’s first penalty and play resumes 5 v. 4.

QUESTION: Attacking team in the attacking zone gets a delayed penalty for High-Sticking. The defensive team clears the puck out of the zone and the penalized team's goalie plays the puck. I would like to know where the ensuing face-off should take place.

ANSWER: Since play stopped due to the offending team’s goalkeeper securing possession and control of the puck, the face-off would be located at the nearest face-off spot (in the same zone) as where the goalkeeper played the puck.

QUESTION: If a goalie kicks the net off, can a goal still be scored? Situation is a goal mouth pass came from left to right, goalie slid across, knocking the net off, and a pass was then sent back across to the for an open net goal. Ref called it a "goal" and then realized the net was off and called it "no goal".

“Play shall be stopped immediately when the goal frame has been displaced from its normal position.”

Therefore, if the officials are 100% certain that the goal frame was displaced before the puck entered the goal, they must disallow the goal.

QUESTION:  If a player of the opposing team swears at a coach, what is the punishment for that player?

“A misconduct penalty shall be assessed to any player who commits the following actions:

Persists in any conduct where they were previously assessed a minor penalty for unsportsmanlike conduct.

Using obscene, profane or abusive language to any person anywhere in the rink before, during or after the game.

Intentionally knocking or shooting the puck out of the reach of an official who is retrieving it during a stoppage of play.

Not proceeding directly and immediately to the penalty bench or to the dressing room, after being penalized and ordered to do so by the officials (equipment shall be delivered to him by a teammate, if necessary).

Entering or remaining in the Referee’s Crease, unless invited to do so.

Interfering in any non-physical manner with any Game Official including the Referee, Linesman, Timekeepers or Goal Judges in the performance of their duties.”