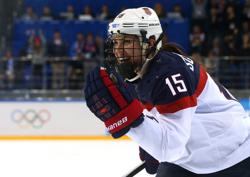 Anne Schleper (AN-nee SHLEPP-er), a silver-medalist from the 2014 U.S. Women's Olympic Ice Hockey Team, took part in practice with the Tampa Bay Lightning (NHL) on Monday, October 13 at the Amalie Arena (401 Channelside Drive, Tampa, Florida 33602). Schleper's participation on Monday concluded the Lightning's activities and support of the International Ice Hockey Federation World Girls’ Ice Hockey Weekend. Throughout the weekend, Schleper served as a special guest in a number of events being hosted by the Lightning. To learn more about the team's programming and all of Schleper's involvement, go to the Tampa Bay Lightning's website. Along with the recent participation of fellow Olympian Hilary Knight with the Anaheim Ducks, these unique and well-deserved opportunities continue to showcase women's ice hockey and build awareness for the growth of the sport among female players.

"If we can build the sport in any way. I've got twin daughters, and if they look at this and are like, 'You know what, I'd love to play hockey,' then it's paying off for us."

-Lightning Head Coach Jon Cooper on the importance of Schleper's skate for the future of the sport.