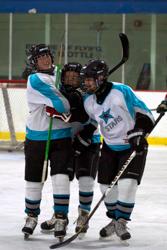 The Detroit MORC Stars began as a small organization in 2007.

Fast-forward seven years, and the program that provides an opportunity for special-needs athletes to play hockey in southeastern Michigan has now grown to more than 125 participants.

“It’s been crazy,” program director Peter Ciavaglia said. “We started with, I can’t remember, five, six, seven kids in 2007, and we’ve kind of done it in spurts where one year we add a couple kids. Last year, we went from 80 to start the year to 125 to end the year."

“I had no idea where it would go when I started it.”

Last year, there was a waiting list of about 20 athletes, since the organization didn’t have equipment for all the new players.

That growth wouldn’t have been possible without the dedication of Ciavaglia, a number of other volunteers and plenty of financial backing along the way. The MORC Stars received a $2,000 equipment grant from The USA Hockey Foundation and used that money to purchase items such as helmets and jerseys.

“The $2,000 from USA Hockey, the equipment donations we’ve received in the past from the NHLPA and the grant money the ASHA [American Special Hockey Association] organization gave us have enabled us to provide the services we provide without having to charge anybody,” Ciavaglia said.

Athletes who skate for the MORC Stars — which stands for Monroe Oakland Regional Center, an organization to which many of the players belong  — are able to participate for free. The players are outfitted with all the equipment they need to participate.

According to Ciavaglia, the MORC Stars have grown entirely by word of mouth. The organization pulls from a wide area and gets players from as far away as Lansing, which is 90 miles northwest of Detroit.

One of the program’s coaches, Jennifer Taiariol, who works for Livonia Public Schools, is able to help special-needs kids during the day and also assist some of those same kids on the ice.

“A lot of students that I’ve worked with like the extracurricular activities,” said Taiariol, who has been a MORC Stars coach for six years. “There’s not a lot of special-needs activities available for students out in the community, and this is one those programs that has become, obviously with our growth, wildly known out there. It’s fun, easy access and we take athletes at all different levels. So whether you’ve never been on skates or you’re an advanced skater, we take them all.”

The MORC Stars don’t have any concrete parameters on who can skate, but Ciavaglia notes that most of the athletes have some sort of cognitive impairment or issues with learning.

“The whole goal is the same in the program, and that’s to provide the kids with a good experience,” Ciavaglia said. “Winning and losing is not very important to us, but the lessons you learn from winning and losing are. We try to teach our kids to be good sports whether you’re winning or losing. Confidence, teamwork, unselfishness — all those things that the sport of hockey can bring to you in life, we try to instill in our athletes.”

With more than 125 athletes in the program, there is certainly a wide range of skills.

The players, who are generally within the ages of 6 to 45, are broken up into teams based on ability. There are about 100 athletes in the B- and C-levels who skate at the program’s main facility, the Eddie Edgar Ice Arena in Livonia. About 30 miles northeast, in Fraser, the remaining 25 players on the A-level team are at Fraser Hockeyland. The A-team players are the top skaters in the program.

Taiariol is responsible for the C-level team, coaching players who are just learning to skate or beginners at hockey.

The MORC Stars’ weekly practice usually begins with a series of drills, and then they are able to scrimmage amongst themselves until the end of the one-hour session.

Along with practices, the MORC Stars play between 10 and 20 games per season against local mites, squirts, midgets and high school teams. In past years, the MORC Stars have also taken on club teams from the University of Michigan and Western Michigan University.

“Anyone who’s willing to play us, we’ll go out and play them,” Taiariol said.

The games against some of the high school and college club teams are a joy for Ciavaglia.

“It’s kind of a situation where they’re giving back,” Ciavaglia said. “We usually end up winning by one goal each time. It’s a really great experience, and our kids feel like they’re like any other hockey player.”

Competing in a year-end tournament is always a great way for the players to cap off an exceptional season for the MORC Stars program.

“It’s very rewarding when you see the joy and the dedication of the kids who are part of the program,” Ciavaglia said. “It makes you feel proud that we have something to offer these kids, because they put every ounce of energy into it.”

Coaches must lead the way back to the ice with actions, preparedness and attention to detail

Introduction of temporary card allows for flexible option during COVID-19