Bob Motzko’s 5 Keys to the Season 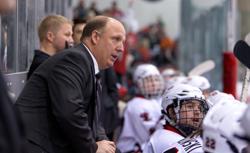 Grab your whistles and clipboards: Hockey season is almost here. Whether it’s your first year with your son or daughter’s mite team, or you’re a seasoned vet at the 14U or 16U level, all coaches want to enter the year with a fresh set of ideas and a solid plan.

“As a coach, you never want to enter the season unprepared,” said St. Cloud State University head coach Bob Motzko. “Preparation is your biggest tool to take into the year.”

Motzko’s prep skills have earned him plenty of success on the bench. At the helm of the Huskies since 2005, he’s guided his squad to five NCAA tournament appearances, a Frozen Four run and back-to-back conference championships.

Here are his five simple tips to take with you into the 2014-15 season and beyond: