Born in Detroit and raised in Boston, Mike Grier lived an American hockey dream, rising through the Massachusetts high school ranks and Boston University to play more than 1,000 NHL games. He won an NCAA national championship with the Terriers in 1995, competed in the IIHF World Junior Championship and won bronze with Team USA at the IIHF World Championship in 2004.

After such a venerable hockey career, few would fault Grier for basking in the warmth of a sunny Friday afternoon in June. But Grier didn’t have time to bask, at least not in the sunshine, because he was among the on-ice instructors at USA Hockey’s Select 17 Player Development Camp in Amherst, N.Y.

“This is my second time at the camp (as an instructor); my first was in the early 2000s at Lake Placid,” said Grier, 39. “It’s fun. It’s always good to be around the kids and give them some advice or tips here and there.”

It wasn’t too long ago that Grier himself was one of those kids, filled with big dreams and potential at the USA Hockey select festival. Now he’s seeing it from the coaches’ perspective.

“The setup is the same,” he said. “The kids, as far as interaction, they seem to all get along and be good kids. They bond and enjoy meeting kids from other parts of the country, and that was the same for me. I thought it was cool to play against Minnesota kids. That was kind of a big thing back then.”

On the ice, however, Grier sees differences between his generation and the current crop of campers. He said the kids are bigger, faster and “probably even a bit more skilled than our group was at 16 or 17.” But of American players as a whole, Grier still sees potential for improvement.

“I think kids need to learn to play with their heads up again, they need to get more puck touches and handle the puck better,” he said. “We’re making strides to improve, but I think that’s the big difference when you see the European kids. They may not be as fast or as strong as us, but they handle the puck in traffic and make plays better than us, and I think that’s where the ADM will help. American kids need to improve their skills and get out of their comfort zone and learn to play with the puck a little bit better.”

“We’re a little bit behind in the creativity and the hockey IQ, which kids in my generation had from playing on the pond or playing street hockey all day,” he said. “You don’t drive down the street and see street hockey games any more, and that’s part of the problem. The creativity has been taken out of the game, and I think that’s one thing the ADM and some coaches and ex-players like me are trying to bring back. We’re trying to get the word out that you can’t take the creativity away from the kid. They have to be able to play and express themselves and think the game, and they don’t need to be so structured. You’ve got to give them some freedom to try things, be creative and fail. The game is the best teacher.”

As a Select 17 instructor, Grier gets an opportunity to put that philosophy into practice. He also views it as a way he can give back to the game that gave him so much.

“I enjoy working with the kids and I enjoy coaching,” he said. “I also coach my son’s team – he’s 10 – and in the summer and fall I do a lot of camps in the Boston area, skills camps, mostly stickhandling and shooting. So I’m at the rink a fair amount.”

Even on a beautiful early summer day in New York.

That’s dedication to American hockey, from one of America’s best. 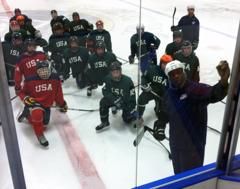