It has been seven years since one of the most memorable NHL Drafts for American-born players took place in Columbus, Ohio.  Ten Americans were chosen in the first round of the 2007 NHL Entry Draft, a record at that time.

Of the Americans picked early, five played in the 2014 Olympic Winter Games in Sochi, Russia:

Since the 2007 NHL Draft, there has been only one draft (2010) that has seen more Americans selected in the opening round (11). 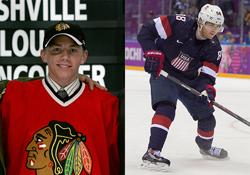 The Chicago Blackhawks drafting Patrick Kane (Buffalo, N.Y.) with the No. 1 overall pick in 2007 marked the first time that American-born players were drafted in consecutive years at No. 1. In 2006, the St. Louis Blues picked Erik Johnson with the top selection. During his career, Kane has won two Stanley Cups (2010, 2013) along with a Conn Smythe Trophy for the most valuable player during the 2013 Stanley Cup Playoff. A product of the U.S. National Team Development Program, Kane helped the U.S. Olympic Men’s Ice Hockey Team earn a silver medal at the 2010 Olympic Winter Games. At the 2014 Olympics, Kane tallied four assists in six games. 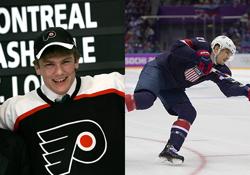 The Philadelphia Flyers drafted James van Riemsdyk (Middleton, N.J.) with the second overall selection. It was the first time ever that two Americans were selected 1-2 at the NHL Draft. Van Riemsdyk played two years at the University of New Hampshire before heading to the Flyers’ affiliate in the AHL.  Since 2007, van Riemsdyk has moved on from Philadelphia to the Toronto Maple Leafs. He recently concluded his best professional season yet, eclipsing the 60-point plateau with 30 goals and 31 assists. At the 2014 Olympics, van Riemsdyk paced Team USA in scoring with a goal and six assists. 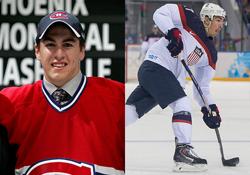 Midway through the first round, Ryan McDonagh (Saint Paul, Minn.) went to Montreal at No. 12. Two years later, the Canadiens traded McDonagh’s rights to the New York Rangers. After winning the 2007 Minnesota Mr. Hockey award at Cretin Derham Hall, McDonagh played three seasons with the University of Wisconsin. He has been a mainstay on the Rangers’ blue line the past three years, with 2013-14 being his breakout campaign as he tallied 14 goals and 29 assists during 77 games. It is no surprise then that McDonagh grabbed Rangers MVP honors at the conclusion of the regular season. At the 2014 Olympics, he contributed a goal and an assist and had a +1 rating. 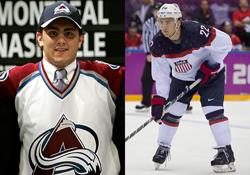 Two spots later, the Colorado Avalanche selected Kevin Shattenkirk (Greenwich, Conn.) with the No. 14 overall pick. From 2005-07, Shattenkirk played in 101 games with the Ann Arbor, Mich.-based U.S. National Team Development Program. He then spent three years at Boston University, helping the Terriers win the 2009 NCAA Frozen Four championship. Like McDonagh, Shattenkirk has become a steady top-four NHL defenseman with the St. Louis Blues. This past season he notched 10 goals and 35 assists in 81 regular season contests. Shattenkirk notched three assists during the 2014 Olympics and earned a +3 rating. 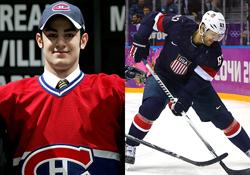 Finally, the Montreal Canadiens selected Max Pacioretty (New Canaan, Conn.) at No. 22 in 2007. After one-years stints with the Sioux City Musketeers (USHL) and the University of Michigan, Pacioretty transitioned to the American Hockey League and the Hamilton Bulldogs. He has consistently played in the Montreal lineup the last three seasons. In 2013-14, Pacioretty scored a career-best 39 goals and dished out 21 assists. He signed a six-year extension with Montreal in 2012, which will keep him with the Canadiens through the 2018-19 year. Over five games during the 2014 Olympics Pacioretty tallied one assist.