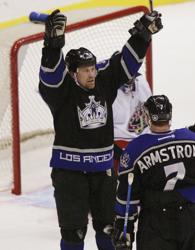 “Put the hockey equipment in the rafters and go play ball.”

Klatt, a product of the Brooklyn Park youth hockey system and Osseo High School in Minnesota, played just about every sport as a child. It helped him develop into a premier, well-rounded athlete who enjoyed each passing season. Now, as an NHL scout, he looks for that same type of athleticism.

Klatt sat down with USA Hockey and explained why the offseason should be spent off the ice.

USA Hockey: The culture seems to have moved away from the three-sport athlete. What other sports did you play?

Trent Klatt: I played every sport my mom and dad put me in. The three main sports I played were football, hockey and baseball. That’s just what we did. It was all about being a three-sport athlete 20 or 30 years ago. It wasn’t about one sport. It was, “Hey, it’s fall. It’s time for football, soccer or tennis. In the wintertime, it’s hockey or basketball or wrestling. In spring, it’s golf or baseball or whatever.” I’m not saying it’s not that way now, but it’s not even close to what it used to be.

USA Hockey: Why do you think society has gone away from the three-sport athlete?

Trent Klatt: I think it’s money. I think it’s the dreams of a professional career. I think parents fear that, if the kid next door is doing it, my kid has to do it to keep up. That’s the attitude now. Parents think their kid is pretty good and they don’t want them to fall behind. But it’s just not the case.

USA Hockey: So when parents ask you about signing up for summer hockey leagues, camps and festivals, what do you tell them?

Trent Klatt: When parents ask me about what their kid should do, I say, “Hey, look, it doesn’t matter.” As an NHL scout, when I’m looking at these kids, I want to see an athlete. That’s one of the biggest things I look for – not if they can play one sport.

USA Hockey: Can that be difficult for some parents to grasp?

Trent Klatt: Here’s one very generic analogy: Everybody loves to wind up and take a big one-time slap shot on the power play to score the big goal. You can’t tell me that a 50- to 60-mile-per-hour pass is not somehow related to a 70- or 80-mile-per-hour fastball. The hand-eye coordination for both sports actually complements each other. I don’t understand how people can’t grasp that. The multisport athlete uses different muscle memory, different muscles, different parts of their brain – they’re becoming a more well-rounded athlete rather than just going up and down the wing from north to south.

Trent Klatt: I’ve played the sport 12 months a year at the age of 30 as an NHL’er. It took everything I possibly had to get through every phase of the season, whether it was July or December. I just don’t think kids are capable of doing it. I think they get burnt out and I think they quit. And one of the biggest things that happens – they get hurt. That’s when their bodies start to break down and they start to get hurt. I know; mine did.

Put a glove in his or her hand. Put the hockey equipment in the rafters and go play ball. That’s what I tell parents. I’m that adamant. I think kids need to turn their brains off. They need to hear from a different coach. They need to play different sports.

USA Hockey: What if the kids still want to play some hockey and work on skills during the offseason? What’s your advice then?

Trent Klatt: I don’t have any problem if a kid picks up their stick and wants to stickhandle or play with their friends and it’s July 15, because the kid wants to. If there is any bit of pressure from mom or dad, I think that’s wrong. The kid starts to feel pressure that they have to attend these camps to keep up with their neighbors – that’s where I draw the line.

USA Hockey: What other benefits are there to playing multiple sports?

USA Hockey: What if they miss a chance to get noticed by scouts and college/junior coaches?

Trent Klatt: Forty years ago, when there wasn’t internet, there was a risk that if you were in an obscure place, you might not get noticed. In today’s world and the technology that we have now – nobody will be hidden. The player will get seen at some point if they’re good enough. The kids can’t hide.

QUESTION: If you have a player with a suspension, and you tell the referee to record it on the scoresheet before a game because the player is sitting out, but the referee comes over before the game a tells you he talked to the league and said he can play what should you do?

ANSWER: All suspensions and other forms of discipline are managed by the local USAH Affiliate of the team, and referees cannot determine player eligibility. Ultimately, it is the responsibility of the Team Coach to make sure players serve their suspensions. Therefore, it would be wise to receive any disciplinary notice from the local Affiliate first-hand.

QUESTION: A player is in the penalty box serving a minor penalty. Play continues 5 v. 4 while the player complains about the call. Play is stopped when the referee assesses the penalized player a second minor penalty for Unsportsmanlike Conduct. Should two minutes be added to the time remaining on the scoreboard for the player's first penalty, or should a second penalty be placed on the scoreboard with play then continuing "5 v. 3"?

ANSWER: In this situation, the same player earned both penalties. Therefore, two minutes must be added to the remaining time on the player’s first penalty and play resumes 5 v. 4.

QUESTION: Attacking team in the attacking zone gets a delayed penalty for High-Sticking. The defensive team clears the puck out of the zone and the penalized team's goalie plays the puck. I would like to know where the ensuing face-off should take place.

ANSWER: Since play stopped due to the offending team’s goalkeeper securing possession and control of the puck, the face-off would be located at the nearest face-off spot (in the same zone) as where the goalkeeper played the puck.

QUESTION: If a goalie kicks the net off, can a goal still be scored? Situation is a goal mouth pass came from left to right, goalie slid across, knocking the net off, and a pass was then sent back across to the for an open net goal. Ref called it a "goal" and then realized the net was off and called it "no goal".

“Play shall be stopped immediately when the goal frame has been displaced from its normal position.”

Therefore, if the officials are 100% certain that the goal frame was displaced before the puck entered the goal, they must disallow the goal.

QUESTION:  If a player of the opposing team swears at a coach, what is the punishment for that player?

“A misconduct penalty shall be assessed to any player who commits the following actions:

Persists in any conduct where they were previously assessed a minor penalty for unsportsmanlike conduct.

Using obscene, profane or abusive language to any person anywhere in the rink before, during or after the game.

Intentionally knocking or shooting the puck out of the reach of an official who is retrieving it during a stoppage of play.

Not proceeding directly and immediately to the penalty bench or to the dressing room, after being penalized and ordered to do so by the officials (equipment shall be delivered to him by a teammate, if necessary).

Entering or remaining in the Referee’s Crease, unless invited to do so.

Interfering in any non-physical manner with any Game Official including the Referee, Linesman, Timekeepers or Goal Judges in the performance of their duties.”