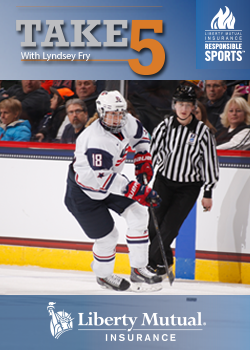 Every athlete experiences a setback during his or her career. That’s just part of sports.

But with every setback, there’s also a chance to come back.

Liberty Mutual Insurance sat down with USA Hockey Women’s National Team forward Lyndsey Fry to get her thoughts on making a strong comeback from her setback.

In our exclusive Take 5 interview, Lyndsey shared the lessons learned overcoming the death of her best friend and former teammate, Liz Turgeon in 2010. Lyndsey and Liz grew up playing hockey together in Colorado, and Liz passed away when they were both just 18 years old.

Lyndsey told us that she “considered (Liz) a sister and a huge part of [her] hockey life,” and that Liz’s death left her feeling “angry and lost” at first. Even months later, Lyndsey said, “[I] didn’t even know if I wanted to play hockey anymore.”

At the time, Lyndsey was torn between returning to Colorado to be with Liz’s family and accepting the invitation to her first senior USA Hockey Women’s National Team camp, which was set to start in just three days.

Eventually, Lyndsey decided to stop feeling sad for the loss of Liz, and instead “began using her memory as fuel to be better.” She also shared that part of those memories involved a promise the two teammates once made to each other to eventually play on the National Team together.

Lyndsey was part of the Silver Medal-winning USA Hockey Women’s National Team in Sochi, Russia in the 2014 Winter Olympics, and she believes that Medal win helped “honor” Liz and her memory.

Lyndsey believes that setbacks not only help fuel comebacks, but also help athletes realize their full strength, abilities and potential. She advises young athletes who are dealing with a loss or any other setbacks to just “believe.”

“You are so much stronger than you think, and everything will get better,” says Lyndsey. “Of course, this challenge wasn’t in your plan, but you’ll learn from it and be stronger after. Be patient and try to have the best attitude possible.”

At Liberty Mutual Insurance, we constantly look for ways to celebrate the countless acts of responsibility shown by people every day. We created Responsible Sports, powered by Positive Coaching Alliance, as part of this belief to help ensure that our kids experience the best that sports have to offer in environments that promote and display responsibility. We believe kids can learn valuable life lessons when coaches and parents come together to support winning on and off the field. Join the Responsible Sports movement!

©2014 Liberty Mutual Insurance Company and Positive Coaching Alliance. All rights reserved. This material may not be distributed without express written permission. Any reproduction in whole or part by and individuals or organizations will be held liable for copyright infringement to the full extent of the law.

Share your favorite mask design for a chance at winning prizes

Despite a few extra steps, adult league players are excited just to have hockey back