The mercury dipped to minus-12 on the south shore of Lake Superior Tuesday, but the Superior (Wis.) High School Spartans stayed hot with 7-1 win over Chippewa Falls in the WIAA girls hockey playoffs.

Tuesday’s triumph meant seven senior Spartans would have at least one more game together, Ari Jago among them. She’s 17 years old, in her fourth varsity season, and she knows every game could be her last.

College hockey? Maybe. She earned all-conference recognition for the third straight season, but she isn’t sure her game translates to the next level. Her academic skills definitely translate. She’s an honor-roll student averaging nearly a point per game on the Spartans blue line. That’s more than enough to vault her into a college lecture hall, but she’s undecided as to whether it will also slide her onto the college ice. As is the case for most 17-year-olds, the only certainty is that she loves hockey and the clock is ticking on her high school career.

“It’s heartbreaking to see it all come to an end,” said Jago. “I truthfully would give anything to start my high school years over again. What a ride it’s been.”

Several of the Spartans have been teammates since Jago traded her figure skates for hockey skates as a 9-year-old. They grew up together, through the ups and downs of adolescence, finally reaching their zenith just in time for the final curtain to fall.

“This year has been the most fun because there’s less drama and more happiness,” said Jago, who spreads sunshine in the room with fellow senior Kali Krivinchuk. “We all grew up playing on the same teams, so we know each other very well now.”

But what they don’t know is whether this ride will last another day, so they’re making the most of every moment. Few do it better than Jago, for not only does she play the game, she also coaches.

A Passion for Helping Others

It all began when Jago was 11. Her coach at the time, John Seifert, asked if any of his older players would be interested in helping guide the Superior termites, a wobbling mass of 5U players. Jago volunteered. One practice turned into another, then another, then another.

“The kids just naturally liked Ari,” said Seifert. “They were drawn to her.”

Six years later, Jago is still coaching. She works with the termites, mites and a squirt team, while also excelling as a two-sport student-athlete (she plays softball in the spring and summer).

“It’s all about the kids with Ari,” said Seifert. “She runs practices no problem and I have absolute confidence when she’s in charge.”

“I have a dream of making a difference in people’s lives,” she said. “I always thought it would be cool to lead a team to a state title, but I also love to see the little termites skating with a chair for what seems like forever and then, one day, they don’t need it anymore.”

Jago’s efforts are paying dividends for the Superior youth program, and it’s a coaching method worth emulating. The peer-teaching model has long offered academic benefits for both teaching peer and student. Properly implementing that same methodology on the ice can deliver a number of benefits for young players, teaching peers and coaches.

“Kids can learn so much by watching a certain skill or technique demonstrated, then emulating what they watched,” said Ken Martel, USA Hockey’s American Development Model technical director. “And when that demonstration comes from a skilled bantam, midget or high school player, there’s an admiration factor that can help accelerate assimilation. To younger kids, these older players are heroes, so sometimes they watch even more closely than they watch their coaches.”

Additionally, some of these teaching peers can demonstrate techniques that older coaches, or parent-coaches from non-hockey backgrounds, might not be able to physically perform. This makes them a valuable resource for youth associations doing everything they can to help young players develop their skills.

“Ari’s been a godsend for us,” said Seifert, who coaches multiple teams throughout the season. “She sees the game better than most and she leads by example.”

In that leadership role, Jago does more than just mentor kids. She also hones her own skills, gaining a head start on the development of her coaching and teaching philosophies.

With younger players, she learned to look for small victories – a nice pass, a nice move or a nice shot – rather than expecting them to execute sequences. With older players, her favorite drills involve overspeed training to push them outside their comfort zone.

“My playing time shaped me as a coach, because I had hands-on experience from good coaches, so I was able to form my opinions of which methods work and which don’t,” she said. “And I’ve learned that when you do tell young players about mistakes and how to fix them, you must make sure you’re telling them more positives than negatives, because if you keep shoving negatives at them, they’ll lose their love for the game, and as a coach, your job is just the opposite.”

Seifert, a regular attendee of USA Hockey coaching education programs, sees a bright future for Jago behind the bench, whether it’s with kids or at a higher level. But as you might expect, she hasn’t thought much about the future. She’s still laser-focused on playing her next game, and hopefully another after that.

“I’m not sure what my future with coaching holds,” she said. “I don’t think it will be my career, but it is important to me. I just like making a difference in people’s lives.

“I’m definitely no one special. I’m just a person with a passion and love for the game.” 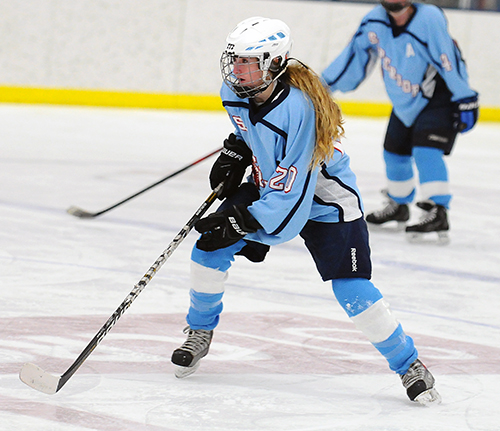