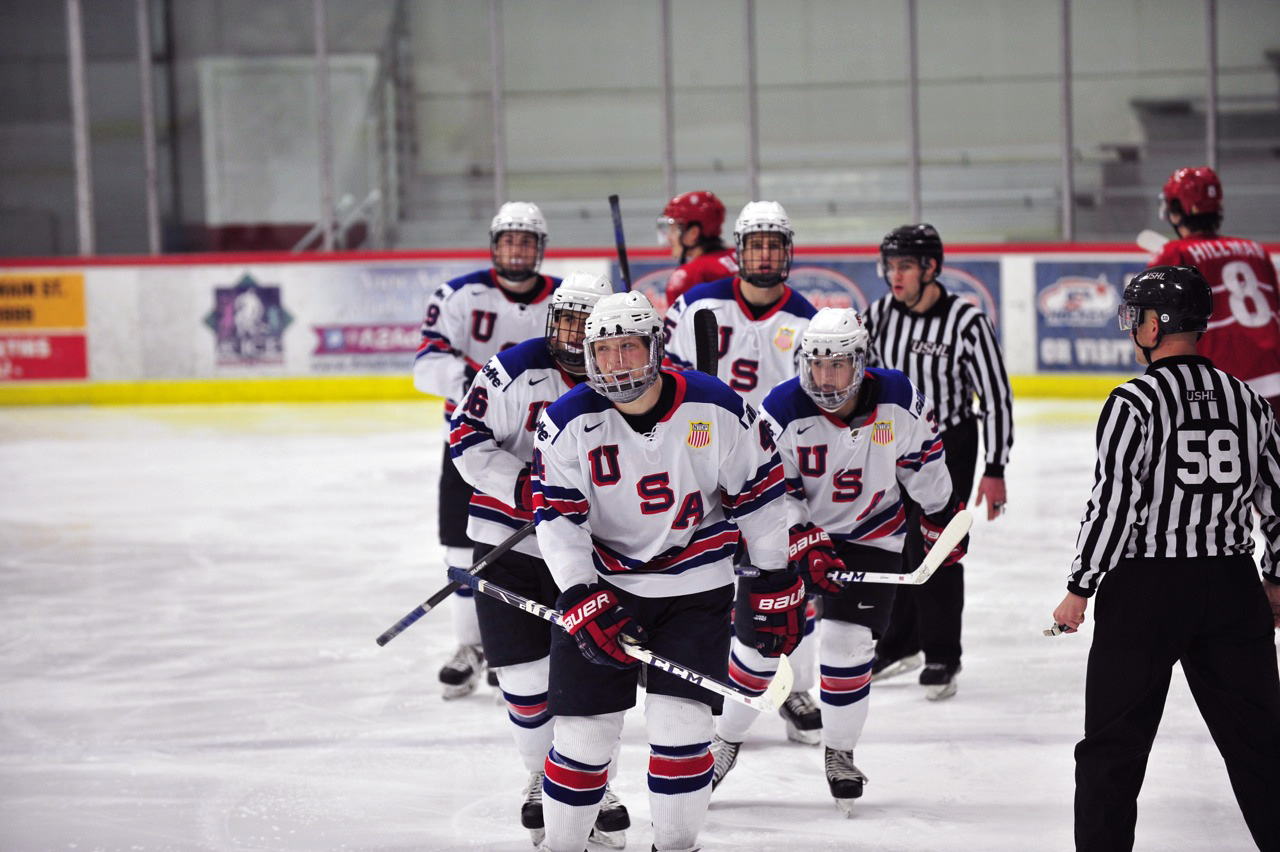 ANN ARBOR, Mich. - Jeremy Bracco (Freeport, N.Y.) collected three assists and Luke Kirwan (DeWitt, N.Y.) scored two goals as the U.S. National Under-17 Team bested the Dubuque Fighting Saints, 5-2, here this evening at the Ann Arbor Ice Cube. With his three helpers, Bracco breaks the National Team Development Program all-time record for assists in a single-season with 51. The record was previously held by Andy Hilbert (Howell, Mich./1997-99) and Patrick Kane (Buffalo, N.Y./2004-06) who each had 50 assists in the 1998-99 and 2005-06 seasons respectively.

Dubuque opened the scoring at the 2:36 mark in the first period. Jordan Greenway (Potsdam, N.Y.) answered for Team USA at 10:25. From the bottom of the left circle, Christian Fischer (Wayne, Ill.) fired the puck on net and Greenway buried the rebound. Jack Roslovic (Columbus, Ohio) also assisted on the play. The U17s added another marker just 25 seconds later. Bracco fed Kirwan on the right side for a one-timer that sailed into the back of the net. Charles McAvoy (Long Beach, N.Y.) also registered an assist on the play. The Fighting Saints pulled even, 2-2, during a five-on-three power play at 18:26.

The U.S. took regained its lead with the lone goal of the second stanza at 15:01. Bracco stood behind the net and found White who pushed the puck under Fighting Saints netminder Ben Johansson’s pads. Noah Hanifin (Norwood, Mass.) also picked up an assist, feeding Bracco from the top of the point.

Kirwan extended the lead for Team USA just 1:36 into the final frame. Zach Werenski (Grosse Pointe, Mich.) and White added the assists. Grant Gabriele (Brighton, Mich.) secured the 5-2 victory for the U17s at the 15:39 mark, while Team USA pulled netminder Luke Opilka (St. Louis, Mo.) for an extra attacker during a delayed penalty call. Bracco registered his record-breaking assist on the play.

Opilka turned away 23 shots for the win for Team USA, while Johansson made 43 saves in the loss for Dubuque.

The U.S. National Under-17 Team enjoys next weekend off, before beginning a six-game road trip with a contest against the Lincoln Stars at the Lincoln Ice Box on Saturday, March 15. Puck drop is scheduled for 7:05 p.m. EST.

Team USA outshot Dubuque, 48-25 ... Two Fighting Saints players have ties to the NTDP. Shane Eiserman (West Newbury, Mass./2012-13) skated in 56 games  with the NTDP last season, compiling 11 goals and 11 assists, while Alexx Privitera (Old Tappan, N.J./2009-10) also played for Team USA ... Follow the NTDP on Twitter and like us on Facebook ... Download the Sport Ngin Mobile App for Apple iOS and Android devices and follow the U.S. National Under-17 and Under-18 Teams. Fans, parents, athletes, and coaches now have unprecedented access to scores, stats, schedules, photos, and more. The app is free and allows users to track scores and news updates from one team. Those wishing to follow more than one team can make a simple in-app purchase of $1.99. Click here to download the app.

Stars of the Game