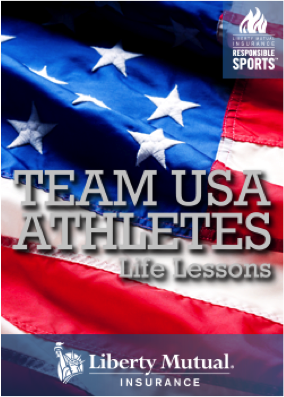 Brought to you by the Liberty Mutual Insurance Responsible Sports program

Our American athletes were just thousands of miles away from home in Sochi, competing against the very best of the world.  And our kids are were watching these men and women on TV in awe, wondering how they got "there."

Of course, these U.S. Olympic participants aren't just lucky or talented.  They've learned a lot over the years to be able to make it to the top.

Lessons like the courage it takes to respect an opponent.  Taking a "big picture" perspective.  How to recover from setbacks.

As parents, these are great lessons for your kids to keep in mind as they were watching the Games.

The Liberty Mutual Insurance Responsible Sports team, together with the experts at Positive Coaching Alliance, have spoken with some of America's top winter athletes and coaches about what they learned in play—and how that made a difference in life.

Set Goals Together.  At the beginning of any season, it's important that both you and your child each write down a separate list of youth sports goals.  Then compare lists.  Hopefully, there's agreement in important areas.  Jim Craig, 1980 Miracle on Ice goaltender, speaks about what he calls a "shared dream": "And you have to understand that if you are going to be successful in life that you can’t do it individually. It’s really collective."

The Right Coach Is Important.  It may not necessarily be the one who gives the most playing time or wins the most, but the one who teaches your children how to succeed off the field and sustains their love for the game.  So take your time choosing your child’s team!  Picabo Street, 1998 U.S. Olympic alpine skiing gold medalist, has strong opinions about this because of her four kids: "I will literally skate across town [for the right coach."

Give Them a Break.  There can come a point when a young athlete plays so much that it isn't play for him or her anymore.  This is referred to as "burn out."  This can happen when an athlete practices too much, plays too many sports, or simply doesn't enjoy the game anymore.  Let them leave the game if they don't love it.  Sometimes, kids just need a long break to re-fill their Emotional Tanks.  Katey Stone, 2014 U.S. Olympic women's ice hockey head coach, states, "Our kids need some time to step away from everything and have a little bit of balance, so they can be better players when they get out there."

Respect Your Opponents.  Your kids look to you in the stands and will emulate your behaviors.  So try to cheer for everybody, even the opponents!  Sometimes, for various reasons, it can be difficult to respect the other side.  It can take real courage.  Jenny Potter, U.S. Olympic women's ice hockey silver medalist, once received a post-game compliment from a Team Canada goaltender, of all people!

Phil Housley, 2002 U.S. Olympic men’s ice hockey silver medalist, points out that a current rival can become a teammate in an instant.  “When you're growing up, you might be playing on a certain team within your city league.  You might have to move to a different team.  And all of the sudden, you meet some new friends, form new teammates, and now, you might be battling the guys that you were originally with.”  So you can never be sure who your kids will be playing with next!

Be a Supportive Base.  Kids need to know that no matter what, win or lose, there is one place where they have unconditional support.  It's not necessary to talk about the game at home, unless they want to.  And if they do, remember that home should be a place of positivity.  Hannah Kearney, 2010 U.S. Olympic mogul skiing gold medalist, remembers coming back to her hometown after not placing in the 2006 Olympic Winter Games, thinking that she had let down 3,200 people.  She was wrong.  "It made me a lot more comfortable four years later, knowing no matter what happened in Vancouver, I was going to come back  home to a community that was going to accept me."

Look at the Big Picture.  As we mentioned, kids take their cues from you, their parents, and from their coaches.  If each game's result is treated as a matter of life and death, that pressure will seep into the fun your kids are having.  Results matter, but another way your kids can "win" is with what they learn from playing.  Tony Granato, 2014 U.S. Olympic men's ice hockey team assistant coach, says, "If we could just look at it as a game…understand that there's a lot of learning that goes along with it and valuable lessons that will be important later on in life."

At Liberty Mutual Insurance, we constantly look for ways to celebrate the countless acts of responsibility shown by people every day. We created Responsible Sports, powered by Positive Coaching Alliance, as part of this belief to help ensure that our kids experience the best that sports have to offer in environments that promote and display responsibility. We believe kids can learn valuable life lessons when coaches and parents come together to support winning on and off the field. Join the Responsible Sports movement!