"We're dealing from a position of strength when it comes to the goaltender position," Bylsma said. "A position where we have two very good guys to be in net and Jonathan will be getting the nod."

He praised both Quick and Ryan Miller for their "body of work" and said he is confident of his team's prospects in goal. As for the rest of the lineup, he said he has not decided on the final line combinations.

"Our lineup for game one against Slovakia will be a game-time decision," Bylsma said.

Unlike past Olympic tournaments, which have typically included one practice before the first game, the U.S. wrapped up its third practice on Wednesday before Thursday's game.

Several players joined coach Bylsma in expressing confidence that the extra practices will help the team come together quickly, which is crucial in a short tournament.

"The team that comes together and figures it out the fastest will be the one that is most victorious," Bylsma said.

The extra practice time allows players to acclimate to the time zone change as well as work on building chemistry with, in some cases, new linemates.

"Every day that we're here it gets a little easier," said James van Riemsdyk.

Large Ice a Focus in Practice

Coaches used neutral zone drills and plenty of shooting drills that sent the forward wide of the faceoff circle into areas not typically available in NHL-sized rinks to help prepare Team USA for the larger Olympic sheets in Sochi.

The large ice is seen by many to be a problem for North American skaters, but the U.S. features many players with experience on the bigger ice surface in previous international tournaments. Defenseman Kevin Shattenkirk, who has played games on the Olympic sheet at world championships and as a member of the U.S. National Team Development Program, said having that experience helps him in Sochi.

"It's very important," he said. "You have to have mobile defensemen who are able to skate back for pucks and accept those fast rushes because there's a lot more room out there to make space."

Cam Fowler, another young defenseman who has played in international tournaments before, said the speedy defense can turn the larger surface to their advantage.

"There are different ways to play to create space for yourself and it benefits you offensively," Fowler said. "We have a good skating team and that's something we're looking to do."

Shattenkirk said international experience on foreign soil when he was younger has prepared him for what lies ahead.

"That's the goal of playing in world championships and world juniors is to prepare you for this stage," said Shattenkirk, who was on the 2009 U.S. National Junior Team. "It's important that we don't get caught up too much and just get back to playing hockey." 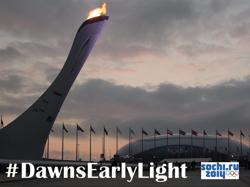 Our fans helped pick #DawnsEarlyLight as the official hashtag of the early rising USA Hockey fan. Now we challenge you to show us a photo of you watching by #DawnsEarlyLight.

Take a photo of you, your watch party, sunrise over frozen ponds or whatever else you like and add #DawnsEarlyLight to the image. Post your photo on social  media and tag either the USA Hockey Facebook page or Twitter accound (@usahockey) using the same hashtag in your message.

We'll share our favorites with our followers and with the men's and women's Olympic teams to show the support they have back home.

USA Hockey asked players, coaches, officials and families to explain what they're thankful for in celebration of Thanksgiving