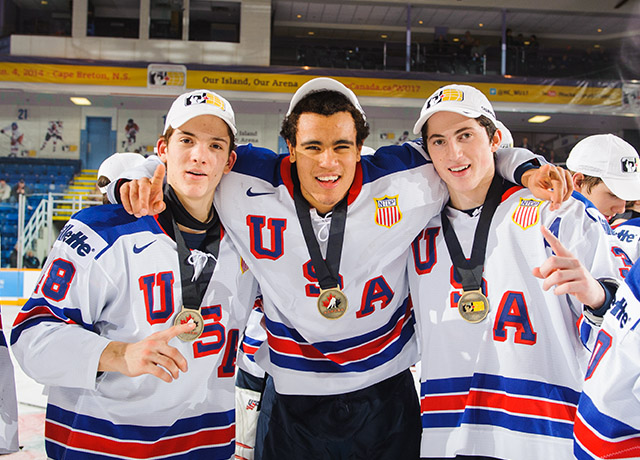 "This is a fun group of kids to work with," said Don Granato, head coach of the U.S. Men's National Under-17 Team. "We never lost focus throughout the tournament and continued to get better each game."

Team USA opened the scoring 13:27 into the first frame when Kirwan beat Pacific netminder Zach Sawchenko. Bracco earned an assist on the marker. Christian Fischer (Wayne, Ill.) tallied a goal to double the U.S. lead 39 seconds before the period expired. Brendan Warren (Carleton, Mich.) connected with Auston Matthews (Scottsdale, Ariz.) who sent the puck toward Fischer. Fischer one-timed the pass into the far corner of the net.

Colin White (Hanover, Mass.) scored just 33 seconds into the middle frame. After a quick breakout, Bracco skated the puck deep into the Pacific zone. White came streaking down into the slot and slammed a pass from Bracco past Sawchenko. Pacific appeared to have notched its first of the game with 6:12 remaining in the period, but the goal was waved off after it was ruled a Pacific player kicked the puck across the goal line. Team USA took a 3-0 lead into second intermission.

Kirwan secured a 4-0 victory for Team USA at 11:34 of the final period. White and Bracco exchanged passes during a three-on-two rush before finding Kirwan in the high slot. Kirwan received the pass and shot it in one motion to send the puck under Sawchenko's pads.

Michael Lackey (Washington, D.C.) stopped 12 shots for Team USA in the shutout win, while Sawchenko made 48 saves in the loss for Pacific.

Best Players of the Game