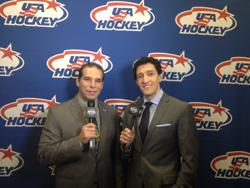 COLORADO SPRINGS, Colo. - NHL Network U.S. will broadcast all Team USA games at the 2014 International Ice Hockey Federation World Junior Championship. Each game, outside of the Dec. 28 USA-Slovakia game, will then be replayed in primetime the same day at 7:00 p.m. ET.

In addition, NHL Network U.S. will air every game from Team USA's group, which includes Canada, Czech Republic, Germany and Slovakia, as well as all eight playoff contests. A complete schedule is below.

NHL.com will provide a free live stream of all Team USA games within the United States, as well as the latest information from the tournament, including news, recaps and select game highlights.