Under-18 Team Completes Comeback Win Over No. 3 Michigan 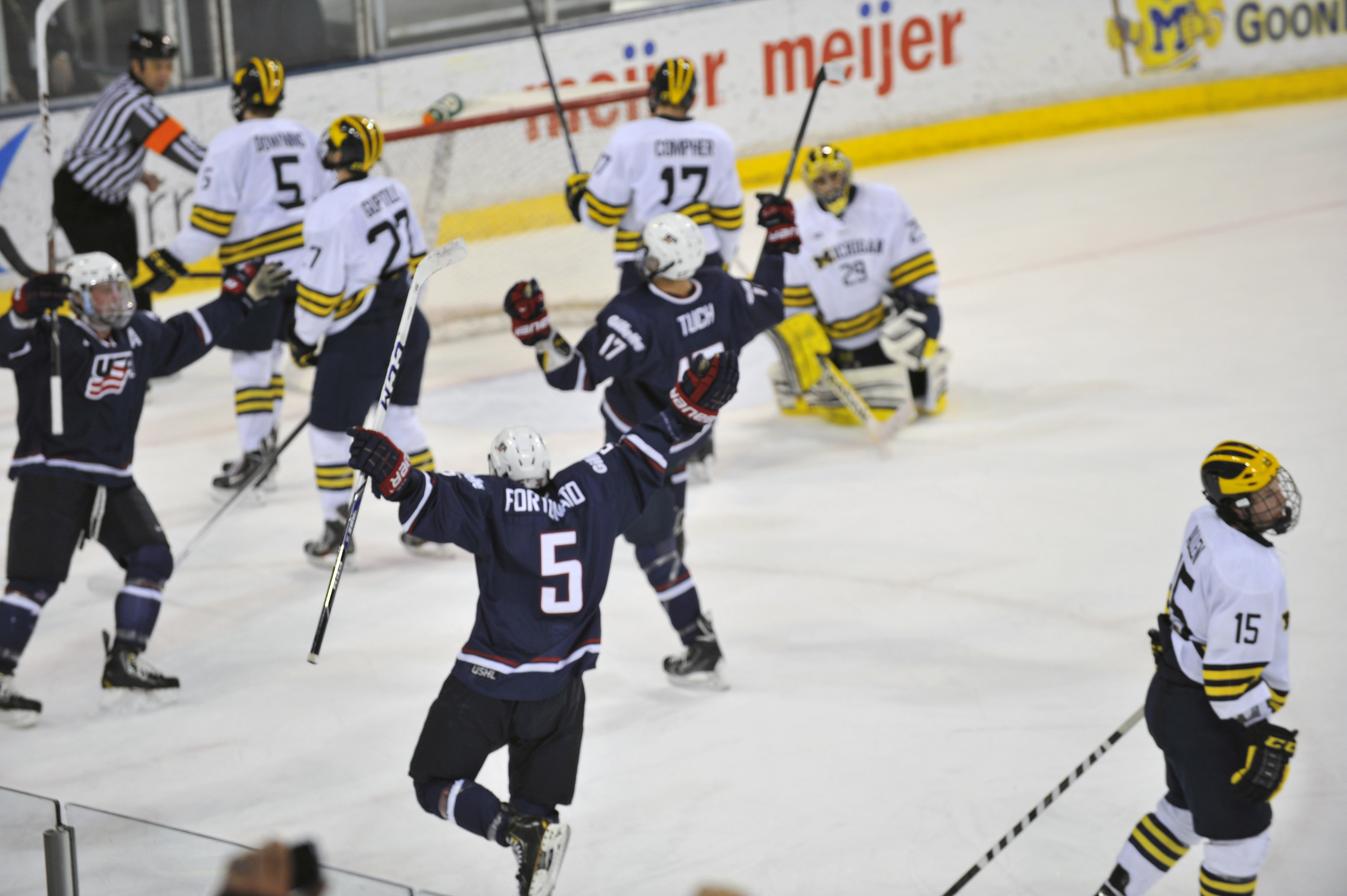 ANN ARBOR, Mich. - Alex Tuch (Baldwinsville, N.Y.) had two points, including the game-winning goal in overtime, as the U.S. National Under-18 Team came back to defeat No. 3 ranked University of Michigan, 5-4, here tonight at Yost Ice Arena.

Team USA took a quick 1-0 advantage over the cross-town rival Wolverines at the 6:10 mark of the first period. Sonny Milano (Massapequa, N.Y.) backhanded a pass from outside Michigan’s blue line to Jack Eichel (North Chelmsford, Mass.), who was cutting across the ice. Eichel found Tuch streaking down the right boards and executed two give-and-go passes before Eichel rifled a one-timer into the top-left corner of Zach Nagelwoort’s net.

Michigan’s contingent of National Team Development Program alumni answered to give the maize and blue a 2-1 lead before first intermission. At 9:40, Evan Allen (Sterling Heights, Mich./2010-12) pulled the Wolverines even with Team USA. Allen then teamed up with Tyler Motte (St. Clair, Mich./2010-12) and Andrew Copp (Ann Arbor, Mich./2009-11) on the power play at 12:24.

Dylan Pavelek (Marysville, Mich.) pulled Team USA even at 7:18 of the second stanza. After a Michigan defender snapped his stick at the right point, Shane Gersich (Chaska, Minn.) scooped up the loose puck and dashed the length of the ice, cutting along the left boards when he entered the offensive zone. Pavelek took advantage of the stickless defender, splitting the Michigan defense and timing his run to catch a cross-ice pass from Gersich. Pavelek chipped in the equalizer from the low-slot for the score. The Wolverines again answered with a pair of goals at 7:50 and 13:20 to regain the lead, 4-2, entering the final period.

The U.S. began to mount it's comback with less than a minute left in regulation. Gersich pulled the U.S. to within one goal, converting on a hard shot from the side of the net with just 52 seconds showing on the clock. Fortunato stepped down into the slot from the right point and found Gersich alone to the left of newly inserted netminder Luke Dwyer. Milano also earned an assist for his second helper on the night. Now within one goal, Team USA pulled goalie Collin Olson (Apple Valley, Minn.) in favor of an extra attacker. Head coach Danton Cole's gamble paid off when Ryan Hitchcock (Manhasset, N.Y.) lit the lamp on a wrap-around with 23 seconds left.

The U.S. carried its momentum over to the extra frame, registering the only two shots. Tuch received a pass in the high slot from Milano as he skated down into the right corner. Tuch collected the puck toward his body and ripped a shot past Dwyer to give Team USA it's second consecutive win over the University of Michigan.

Olson turned aside 17 shots in the win for the Under-18 Team, while Nagelvoort made 22 saves on 24 shots for Michigan. Dwyer stopped one attempt in the overtime loss.

The U.S. National Under-18 Team next faces the Youngstown Phantoms on Saturday (Dec. 7) at the Covelli Centre. Puck drop is scheduled for 7:05 p.m. EST. Live streaming video is available via FASTHockey.com.

Team USA outshot Michigan, 28-21 ... The U.S. has now won back-to-back games versus Michigan ... Thirty-four players from USA Hockey's National Team Development Program have suited up for the University of Michigan ... Like the NTDP on Facebook ... Download the Sport Ngin Mobile App for Apple iOS and Android devices and follow the U.S. National Under-17 and Under-18 Teams. Fans, parents, athletes, and coaches now have unprecedented access to scores, stats, schedules, photos, and more. The app is free and allows users to track scores and news updates from one team. Those wishing to follow more than one team can make a simple in-app purchase of $1.99. Click here to download the app.