There was a time when coaching involved searches for good sloughs with clean ice. Some folks in Alexandria can still remember those days, when west-central Minnesota housed only a handful of hockey players. Today, thanks to a passionate commitment to its youth hockey, and two sheets of cattail-free indoor ice, Alexandria has become something of a hockey hotbed.

Andrew Shriver has lived 15 years of that evolution, having launched Alexandria’s girls hockey program in the late 1990s. Today he serves as director of hockey operations for the Alexandria Area Hockey Association, and also as coach-in-chief for Minnesota Hockey’s District 15.

“In the early 2000s, our overall numbers had plateaued, so we started doing beginner clinics for girls as a way to drum up interest,” said Shriver. “As those evolved, we started seeing more and more young players. Then our high school girls won the state championship in 2007-08, and that, coming on the heels of women’s hockey in the Winter Olympics, did a great job of increasing the numbers.”

Next on the agenda was building better practices, while at the same time accommodating the influx of additional players, both girls and boys. USA Hockey’s American Development Model was taking flight at the same time, providing a blueprint for Shriver and his cohorts.

“There were so many great things that had been going on for years in Alexandria – we were doing a lot of ADM-type things already – but it was somewhat hit-and-miss,” said Shriver. “As we dove in deeper, we found out how easy it was to set up station-based practices just by going to the USA Hockey website and printing out plans. Our coaches did a phenomenal job.”

One of the challenges they faced was the mental hurdle of combining age-appropriate fun, skill development and competitiveness.

“We were doing a great job channeling our inner Sponge Bob instead of our inner Herb Brooks with six-year olds, but we worried about whether it was ‘hockey’ enough, rigorous enough to teach kids what they need, so that when they flip the switch to competitive hockey, it was time well spent,” said Shriver. “And that’s another thing the ADM does really well, is help us weave the technical pieces in so that we’re not missing that component just because the kids are smiling. We’re not boring them with five-minute dissertations on the merits of an inside edge, but they’re still being taught inside edges, and they’re working inside edges and they’re able to implement them into their game mostly because of how engaged they are and how much fun they’re having in practice.”

Soon a full-blown overhaul of the mite program was underway. Among the priorities was providing an inclusive program that didn’t force parents to drive hundreds of miles in search of skill development.

“If the only people we’re catering to are the people who are interested in and can afford that travel hockey experience from beginning to end, then we’re shrinking the talent pool even more, especially in a community like this one with a population of about 12,000,” said Shriver. “So, working with USA Hockey, we reinstated our mite in-house league and dressed up our cross-ice games to make them such fun events that parents don’t feel like all we do is practice. We focused hard on making our cross-ice game nights something exciting, without abandoning the core ADM principles.”

Shriver calls it counterintuitive to some, but in Alexandria they discovered that by focusing on in-house mite and squirt hockey, the peewee and bantam traveling teams became even stronger.

“More kids are interested, more kids are staying in hockey and more parents are receptive to hockey,” he said. “As a result, in the big picture, our travel teams improve because they have that in-house culture of all those kids playing together because they loved meeting at our rink.”

But a dynamic in-house program needs players to succeed, so Alexandria expanded its beginner clinics with a boys offering last month.

“We realized we were missing an opportunity by only offering it to girls,” said Shriver, who hoped to draw more of the area’s best athletes. The response was fantastic. Sixty new boys enrolled for the six-session program, the last of which included a cross-ice game, and the total cost to each player was $25, a fee that included equipment costs. Afterward, Alexandria’s mite enrollment swelled.

“The kids loved it and the parents were blown away (by the ADM practices),” said Shriver. “It was amazing to see how the stations worked perfectly, even with kids who’ve never played before. By the third session, 60 kids that had never played hockey before were moving smoothly through a station-based practice.”

Mites to bantams, Alexandria’s hockey enrollment now exceeds 300 players for only the third time in history. Retention rates have also spiked, with potential for an unprecedented four squirt teams and three peewee teams on the horizon.

“The depth that we have is great, and it’s depth not just in numbers, but also in talent, so that’s an indication (of the ADM impact),” said Shriver. “When people see how the ADM is playing out at our mite, squirt and peewee level, there’s buy-in because they can see the benefits. The more people learn, the more they embrace what the ADM offers.” 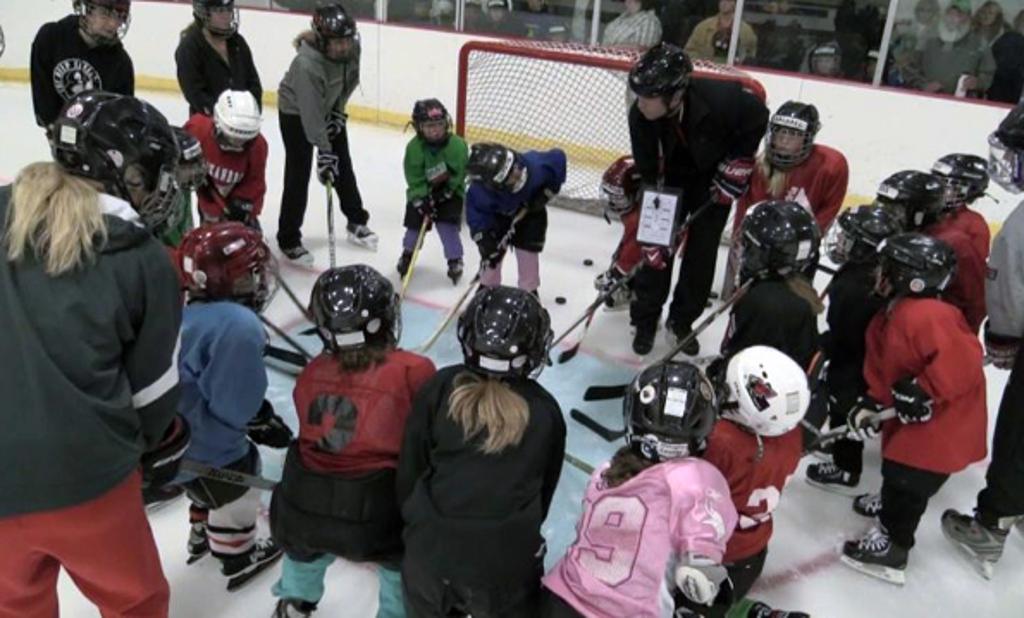