Hockey is more than just another sport in Edina, Minn. It’s something that’s ingrained in the city’s culture.

As a result, it’s hardly a surprise that the Edina Hockey Association boasts having the largest girls’ program in the state of Minnesota.

“It certainly is a community-based program,” said EHA Girls’ Hockey Co-Chair Nick Olsen. “Hockey has been part of Edina’s culture and has been for many years. It’s engraved in the culture.

“We have numerous Stanley Cup winners, NHL stars, college stars and high school stars that have chosen to raise a family here, so they’re part of the fabric of the community. Girls start playing hockey at a young age, and it becomes a cool thing to do.”

Olsen said the EHA is consistently twice as large as any other organization in Minnesota.

“Last year we had 165 girls registered in the Under-8 program,” he said. “It’s a great problem to have if you have a problem. The total enrollment last year was 360 girls from U8 through U19.”

This season’s enrollment is similar. The EHA girls’ program fields 11 U8 teams, four U10 teams, four U12 teams, three U14 teams and one U19 team.

“The girls’ program was established 15 years ago,” Olsen said. “We’ve had all-girls’ teams for 15 years.”

The U12 program might be Edina’s pride and joy.

“U12 is considered the purest year of hockey because everybody is the same age and the girls are representing their community,” Olsen said. “We’ve won the state tournament the last two years. Again, in the state of Minnesota, it’s the purest level of hockey.”

Edina offers something for everybody, including girls who more than likely will not go on and play college hockey.

“Our U19 team was founded in 2004,” Olsen said. “All the good hockey players play high school hockey. We supply girls to many high schools but also have Edina High School, which has a varsity and junior varsity team. We have 35 skaters who are high school age who are in the Edina program and another 35 playing for private schools. U19 is a rec league, but it gives girls a chance to play.

“It gives girls who love the game a chance to play even if they don’t make their high school team.”

At the other end of the age spectrum is the U8 program.

“We welcome all youngsters 8 and below to learn the game of hockey and to learn how to skate,” Olsen said. “It provides the foundation for the program. With such large numbers, it’s going to translate into success in the future.”

But there is more to the Edina program than skating, passing and shooting pucks.

“If you want to know the real secret [behind the program’s success], it’s the social aspect,” Olsen said. “We have a lot of team parties and a lot of charitable events. Our teams do a lot more than play hockey.

“The locker room is like a clubhouse with these girls. They get to spend time with their friends. The real magic is the bonding that happens on the ice. Even with an NHL team you don’t get that. We try to promote these teams having events together and we certainly have team events like charity events.”

At the top of the list is the Sandwich Making Event, which is part of The Sandwich Project of Minnesota. The goal of the EHA girls’ program is for each team to make 150 sandwiches (this year’s event is scheduled for Dec. 14) that will be distributed to people who live in various shelters as well as to food shelves.

Overall, the EHA hopes to have 100 teams participate, which in turn would produce 15,000 sandwiches by the end of the day.

“This is a great service opportunity to become involved in and is a great way for teams to do something meaningful for the community,” Olsen said.

“We implemented it about four years ago,” Olsen said. “We believe in small-area games and skill development. That’s the focus of our program all the way through at the different levels.

“Coaches are experienced but all of them embrace the philosophy of the ADM.”

There’s more. Because the girls’ program has expanded more than might have been expected, the city had to do something that initially wasn’t on the drawing board.

“When girls’ hockey became popular it had a lot of support,” Olsen said. “And girls’ hockey is taking up more space. As a result, the city recently voted to approve the building of another rink to accommodate the demand for ice in our community due to the great number of players in the Edina association.” 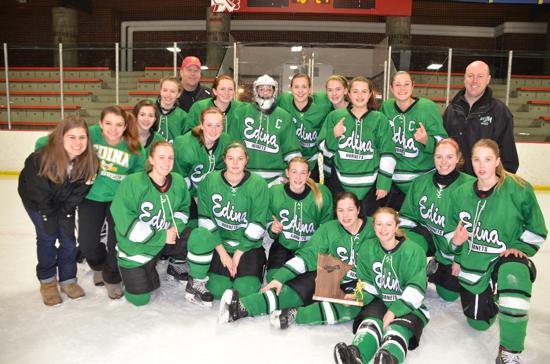