They call it the Breakfast Club.

Now in its tenth season, this early-morning confluence of mentorship, community spirit and skill development has morphed into something far greater than its founders ever imagined.

“We had no clue we’d still be doing this 10 years later,” said David Hoff, who helped launch the Breakfast Club. “It started out as a concept to develop players for the high school team and at the same time utilize some ice time that was just sitting there, not being used. We had this idea to use that ice time, work on skill progressions and then, because it was a small community, someone brought a little breakfast And then everyone heads off to school.”

Sprouting from those humble beginnings, the Breakfast Club evolved into a model for fun and function.

It begins each Wednesday at 7:15 a.m., when a smattering of mites, squirts, peewees and bantams join with high school varsity players and three coaches at the Bottineau Community Arena. Assigned rotations of parents trail them into the rink with pancakes and sausages. For the ensuing 30 minutes, coaches and varsity players lead youngsters through a station-based practice played in allegro time.

“We’re heavy on skills and keeping the kids moving,” said Hoff, who serves as head coach of the boys’ varsity team and also as coach-in-chief for USA Hockey’s Northern Plains District. “In the time we have, if the kids can just see something and work on trying to replicate it and get the repetitions in, that’s our goal. We do very little stopping and starting. We give them 30 minutes of pucks on sticks, and in a lot of cases, that might be more puck-on-stick time than they had in some of longer traditional practices that were going on back when we started the Breakfast Club.”

“As the high school coach, I now have varsity players that have been in the Breakfast Club for nine or ten years, and it’s made a difference in our high school program,” said Hoff. “We have kids that are way more skilled than what we did 10 years ago.”

The benefits extend off the ice as well, with varsity players embracing a mentor role, often for the first time. They help guide the youngsters through practice and then they eat breakfast together, at the arena, along with the parents and coaches, in a celebration of hockey and community. From there, it’s off to school, together.

“We have mites eating breakfast with the high school kids they might watch on game nights, and that’s pretty cool,” said Hoff. “For us in a small community, this is something that brings 30 kids to the rink every Wednesday morning. I mean, it never fails. Kids like being there. It’s good for us and it’s good for hockey in this community.”

Further proof is found in Bottineau’s expanding youth hockey enrollment, a trend necessitating creative scheduling on the community’s single sheet of indoor ice. ADM shared-ice principles have aided in that mission, actually increasing the number of practices for youth players despite the diminishing supply of available ice time.

“One of the things we’ve embraced, as ice time has become more scarce, is getting multiple ages groups on the ice together,” said Hoff. “With the ADM, we’ve got more kids playing hockey in our community than we’ve had previously, even though our community is slightly smaller, so we’ve been able to do more in-house stuff that we haven’t always been able to do.

“Even in a small community like ours, we can do some of those in-house things now, so you don’t have to rely on traveling all the time to play.”

When Bottineau youth players do travel, it’s occasionally north of the border, given their proximity to southern Manitoba, where seemingly every community has hockey regardless of its size. Hoff says it’s a unique challenge, especially given the differences they sometimes encounter, like full-ice mite games.

“Bottineau is 100 miles away from closest North Dakota town that has hockey, so the youth programs here do play the Canadians sometimes, because our parents can run up there in 30 minutes,” explains Hoff. “So it would be easy for our people to say ‘Well, I don’t see the mites in Canada doing (cross-ice), and if the Canadians aren’t doing it, why should we?’

“But in our community, we have people who have seen what the Breakfast Club has done, and its relationship to the ADM; our mites are way ahead of where they’ve ever been in terms of skill development. And I attribute that to our coaches committing to doing cross-ice and the station-based practices. They see the correlation between what we’ve been doing and how the ADM is beneficial to our kids.”

Bottineau’s effort has even won over some of the northern neighbors, according to Hoff.

“We actually had a cross-ice mite jamboree down here last year and invited some of the Canadian teams,” he said. “I think even the small towns in southern Manitoba enjoyed the cross-ice games.”

It’s all rooted in Bottineau’s fertile foundation of fun and age-appropriate development.

“The mite program in this community is so much more than just a schedule of games,” said Hoff. “At that level, it really has to be about development. That’s what’s really important. So we’re trying to get kids repetitions rather than focusing on the outcome. Let’s work on getting to the outcome. And as we do it, people see their kids improving, handling the puck more in games, so that’s a selling point on its own.” 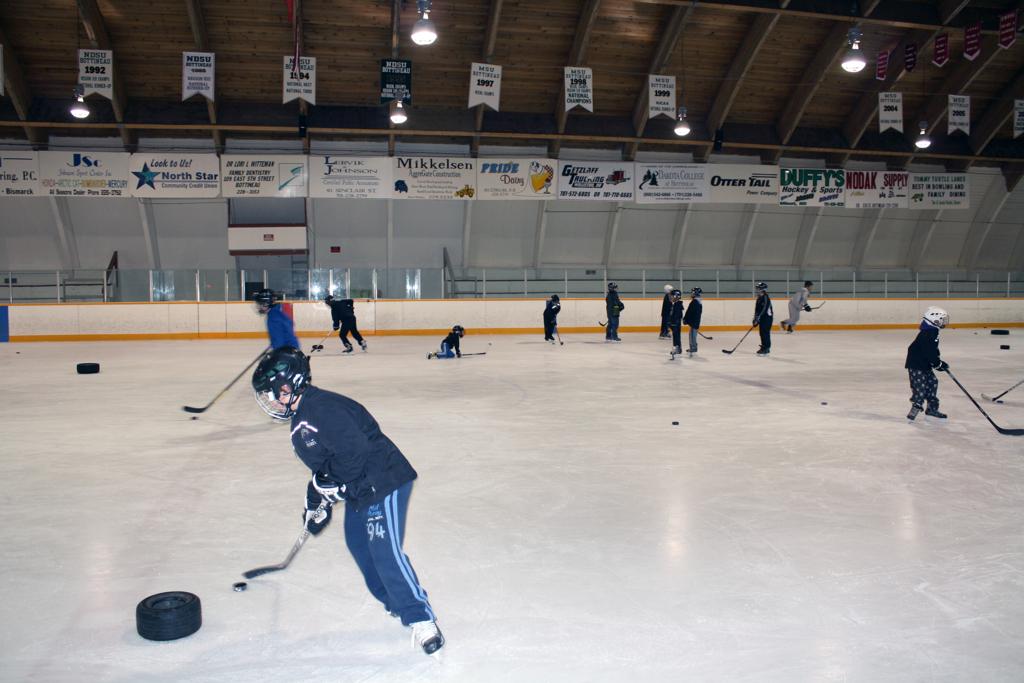 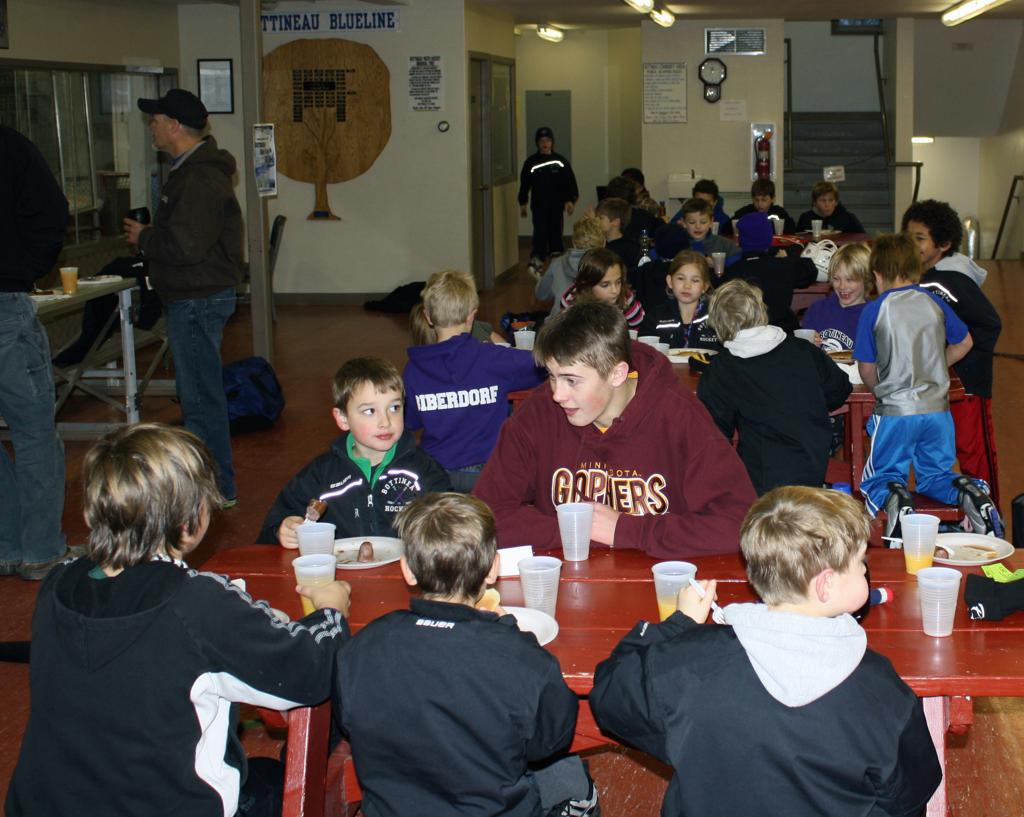 After practice, the coaches, players and parents enjoy breakfast together.