WENTZVILLE, Mo. -- Josh Pauls carries all the credentials needed to have instant legitimacy as a hockey coach.

He has been on the U.S. National Sled Hockey Team for five years. In 2010, he helped Team USA win a Paralympic gold medal. And in March in Sochi, Russia, he is likely to compete in his second Paralympic Winter Games.

So if anyone questions his knowledge just because he had his legs amputated below his knees when he was 11-months old, he easily answers every concern.

“Most guys aren’t used to sled hockey,” said Pauls, from Green Brook, N.J., who is in his second year as an assistant coach at Timberland High School in the St. Louis suburb of Wentzville. “But they’ve all been real receptive of any criticism I’ve given.”

Pauls, 20, joined his teammates from the U.S. team at a three-day training session Nov. 7-9 at the Lindenwood Ice Arena as it prepares for the upcoming World Sledge Hockey Challenge, Dec. 1-7 in Toronto and the Sochi 2014 Paralympic Winter Games, March 7-16. Besides working out, the national team also attended a St. Louis Blues game, where the sled hockey players got to meet some of the Blues players, and visited a St. Louis Rams practice.

Pauls made sure he gleaned some coaching tactics from watching the Rams’ walk through before they went to Indianapolis for a 38-8 victory. But mostly, as a hockey guy, he enjoyed the experience of sitting in a luxury suite at the Scottrade Center for a Blues game.

“It was awesome,” he said. “They had us on the jumbotron; it was really awesome to be there and be honored like that by them. Not everybody gets a chance for something like that to happen.”

Born without tibia bones in either of his legs, Pauls said his parents, Tony and Debbie, tried to provide their son the experience of any other boy. So Tony, a hockey “addict,” and Debbie looked for an outlet for Josh to get involved with the sport.

“I did not actually. I tried it out and I was like, ‘this is stupid, I don’t want to do it any more,’” he recalled. “Then a local team opened up in my area and I said, ‘All right, I’ll give it another try.’

And he’s been doing it at a high level almost ever since.

Pauls’ first Paralympic experience in 2010 at the Vancouver Games came when he was 17 years old. He had one assist in five games after making the team, in part, because a player retired just prior to the Games.

“The one thing that he gives us is he can play both forward and defense for us,” U.S. coach Jeff Sauer said. “He’s got great quickness, which really helps from a coach’s standpoint because I can count on if somebody gets beat, he can get back to help out.”

Sauer said he expects Pauls to be a major part of the U.S. team for another two or three Paralympic Winter Games.

For now, Pauls is enjoying the life of a normal college student with the side job of coaching an able-bodied team. Timberland coach Led Cadieux said if any of his high school players wondered what a guy without legs could bring to the team, those concerns were neither expressed nor lasting.

“Once you’re around Josh for any length of time you realize he does probably as much with the capability that he has that most people do with full capability,” Cadieux said. “He’s just a phenomenal sled hockey player and he understands the game very, very well.

“Not just the sled game but the regular game.”

The fact that Pauls wears the U.S. sweater at the highest level certainly doesn’t hurt his reputation. It’s a lifelong dream come true for Pauls.

“It means the world to be able to represent my country,” he said. “This isn’t just a feel-good sport as you can see from our practice. This is something that we work hard at. We work out three to five times a week off the ice, two to three, maybe four times, on the ice. We’re working hard. 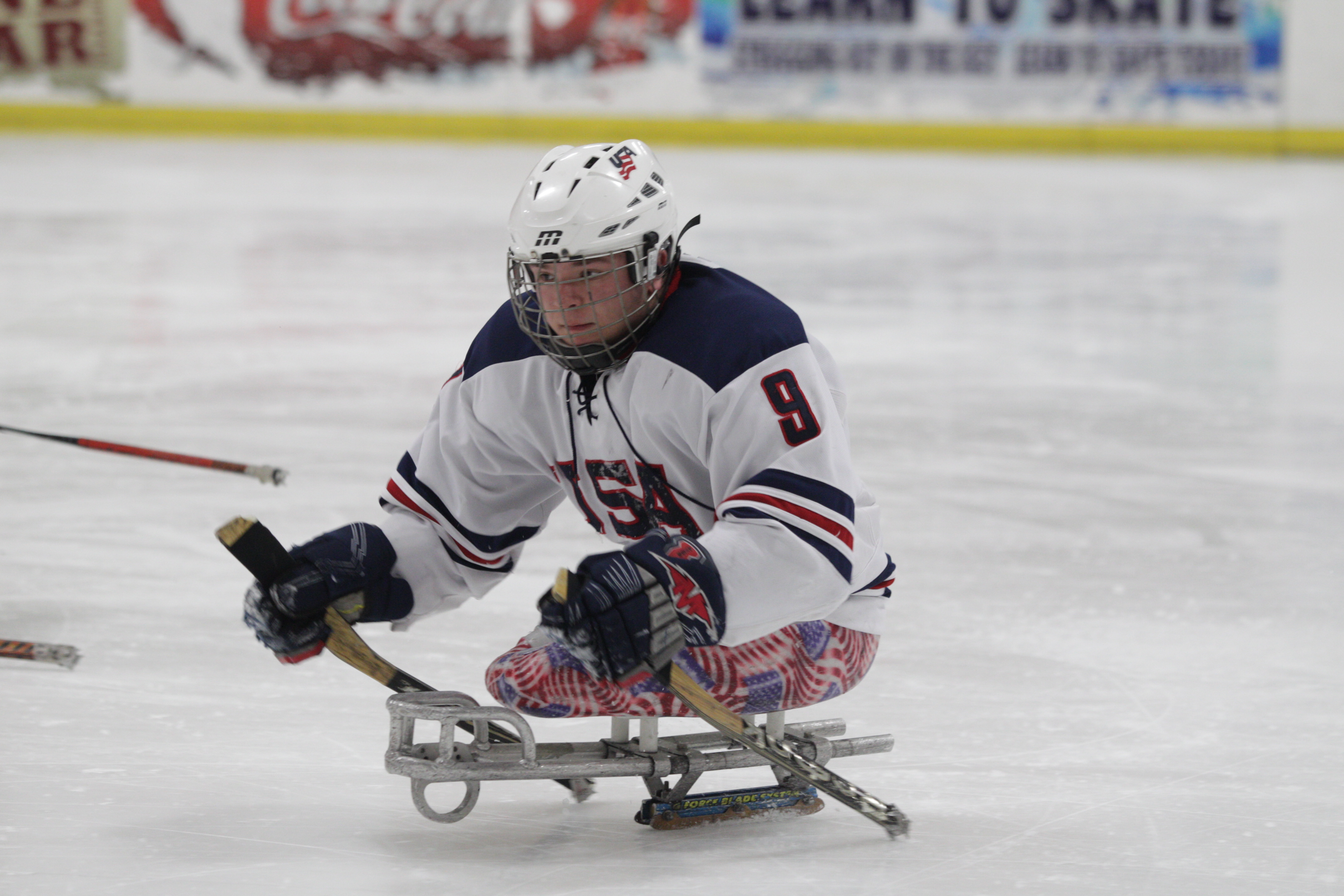