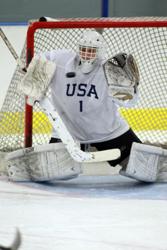 You don’t need to be a goaltender to develop quality goaltending. Seth Appert head men’s ice hockey coach at RPI, was a four-year goalie at Ferris State University. He knows goalies can often be ignored, especially at the youth levels. It shouldn’t be that way.

USA Hockey: What is your perception of how goalies are coached and developed at the youth levels?

Seth Appert: I think too often coaches are afraid of goalies, for lack of a better term. They just kind of stick them down there and they don’t really know anything. They don’t know what to do with them or what to say to them. They just put them down on the other end and tell them to stop the puck. The biggest thing in my mind is that you want to have a basic knowledge of the position so you can go through some very easy fundamentals with your goaltenders every practice.

USA Hockey: How basic are we talking?

Seth Appert: Skating in the crease, save selection, tracking pucks and others. It can be as simple as using their sticks to make saves instead of using their pads. Just as simple as catching pucks in their chest instead of dropping those pucks. Simple crease movement-type drills to work on their skating skills for their position. Just that alone is really important for the long-term fundamental success of the goaltender.

USA Hockey: What kind of skating skills? Are they much different or can we skate them with the rest of the forwards and defensemen?

Seth Appert: It really doesn’t matter how well the goalie can skate from one end to the other. What matters is how well they can skate within that 20-square-foot area. One thing I would suggest is that every youth hockey coach learns some goaltending skating drills. When your team is working on skating, your goaltender should be working skating within their crease.

USA Hockey: If I’m just getting into coaching and I don’t know what approach to take with my goalies, where would you direct me? Where can I find these drills?

Seth Appert: You can go to www.USAHockeyGoaltending.com where they’ve done a great job the last several years with guys like Joe Exter and Mike Ayers and now Kenny Reiter. They have age-specific goaltending drills and videos that a lot of college and pro goalies and goalie coaches have worked with USA Hockey to help create. There are a lot of resources for coaches online. And again, you don’t need to be unbelievably creative. Just be simple and detailed in your drills.

USA Hockey: If coaches don’t make the effort to learn the position and spend time with their goaltenders, does that affect the goalies mentally as well?

Seth Appert: It sure does. At the end of the day, it’s a team sport. The goaltending position is a little different, but you still want to be part of the team. To just put them down at the end of the ice or put them in net and never talk to them or have them involved or hold them accountable, it makes it feel like it’s an individual sport. Part of the reason that all kids choose to play hockey is because it’s fun, it’s competitive and they get to play with their friends and their buddies. Don’t treat them like it’s an individual sport. If you wanted to play an individual sport, you’d pick something else.

USA Hockey: How should coaches hold goalies accountable in practice when there might be so much going on?

Seth Appert: I don’t think goalies are held accountable enough in practices. I think too often the coaches focus on the team. You’ll hear that a goalie is a “gamer” and he doesn’t compete that hard in practice. I think too many coaches let the goalies off the hook. A lot of the time the goalies just don’t pay attention. They just think, ‘Well, I’m just a goalie, I just have to stop the puck.’ Do you know where the passes are coming from? Do you know if there will be a second shot coming in the drill? Are you engaged with the team or not? Or are you just going back there and being on an island by yourself.

The goaltender should be the rock of your team. If the goalie is going to be the rock or the center of your team, then they have to be your hardest worker. Your coaches have to hold them accountable to that.

USA Hockey: If you are going to hold your goalies accountable, then should coaches make that extra effort to learn more about the position?

Seth Appert: Absolutely – and it doesn’t have to be fancy. Simpler is better at youth levels. Even working with college goalies, the simplicity in the drills that we do would probably amaze most youth coaches. Goaltending isn’t about doing a bunch of crazy stuff. It’s about mastering the simple and mastering the muscle memory and habits needed,

USA Hockey: So when it’s all said and done, it’s not mandatory to add a goalie expert to your coaching staff?

Seth Appert: No. I think it’s ideal if you have one or two within your association. But if you don’t, go on www.USAHockeyGoaltending.com or go ask some goalie coaches for the four most simple drills that are beneficial for youth goalies – and do those over and over and over again.

Seth Appert: Just for an example: At the college level, we just take slap shots on the ice from 15 feet above the tops of the circles, one at a time. All they’re working on is trying to go into the butterfly and make a save with their stick instead of letting it hit their pads. It’s boring and it’s tedious, but it’s incredibly important. And for every goalie session, we end by shooting pucks at their chest to work on repetition and muscle memory and the feel of smothering those pucks against your chest instead of letting those pop out. If we’re doing drills that simple and that monotonous, then it gives you an idea of the simple things youth goalie coaches should be working on.