Concord Youth Hockey Association Women’s Coordinator Jeremy Benoit didn’t hesitate when asked why the number of girls registered for the New Hampshire-based program has shown an increase in recent years.

“We have a clear path for girls to continue to play with girls,” said Benoit, who’s in his third year as the women’s coordinator and eighth overall with the association. “That’s allowed us to continue that progression as girls can move within the girls’ program from Under-10 to Under-14 and beyond.”

Benoit then cited a personal example of why the association has become a magnet for girls who prefer to play on all-girls’ teams.

“I have two daughters on the U12 team,” he said. “They started playing on boys’ teams, and at different times each was the only girl on a boys’ team. I believe that’s the case with a lot of girls in the program. They prefer to play on an all-girls team.”

The proof, as the saying goes, is in the numbers.

The CYHA re-instated a U12 team three years ago. For the first time, the association added a U10 team last year. This season, in addition to the U10 and U12 teams, the CYHA is fielding a U14 and a U16/19 team.

The CYHA was founded 55 years ago but didn’t add girls’ hockey until the early 1990s. Ironically, the CYHA has produced a most distinguished alumnus — Tara Mounsey, who played on the 1998 gold-medal-winning U.S. Olympic Women’s Team and the 2002 silver-medal-winning Olympic Team.

Mounsey played on a CYHA U12 girls’ team that in 1992 captured both the New England and national championships. She later played on the Concord High boys’ team that annexed the 1996 Class L state championship.

“Girls don’t recognize her, but within the program she’s well-known and her accomplishments are well-known,” Benoit said. “Certainly, we use her to enable the girls to set their sights as high as they wish — that girls growing up can get to the highest level of female hockey.

“The way she’s looked up to in our program is based on her accomplishments.”

Younger girls in the CYHA start out integrated with boys of similar ages and participate in the CYHA’s Dynomite program, which is geared toward getting youngsters interested in hockey.

“It was implemented at all of the younger ages,” Benoit said. “At the older ages, we utilize almost all of the principles. We structure practices with a lot of the station activity, skills and drills.”

Benoit, who coaches the U12 team, has a motto that is two-fold in nature.

“I believe the best part is watching all the girls I’ve coached have as much fun working hard as they are at a great sport,” he said. “I ask them to work hard. My motto is if you are going to play hockey for me, the first thing is to work hard and the second is to have fun. My girls do that.”

The CYHA girls and boys also did something else earlier this year that didn’t have anything to do with skating, passing or shooting pucks. After the Boston Marathon bombings, the CYHA launched a fundraising program for the purpose of collecting donations for the family of Jeffrey Bauman Jr.

Bauman, whose father Jeffrey Bauman Sr. is a CYHA coach, lost both of his legs in the bombing and also helped authorities identify one of the suspects.

“We thought we’d step up to the plate and do a little bit of a fundraiser to assist with their expenses in commuting and expenses with things that frankly are unexpected in situations like these,” said CYHA treasurer Wes Riley.

“A small group of girls from the U12 team went down to the site of the bombings and they hung a Concord jersey and put up a banner acknowledging Jeff,” Benoit said. “Some $3,200 was raised in the first 24 hours and close to $8,000 when all was done.” 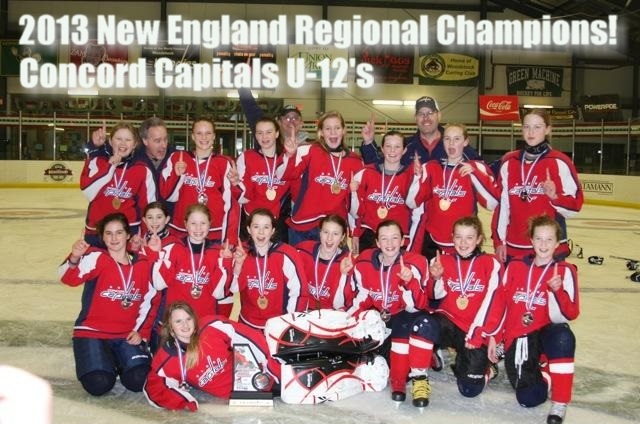