Jon Cooper Has No Time for “Yes Men” 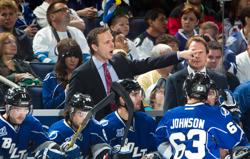 When it comes to assistants, Tampa Bay Lightning Head Coach Jon Cooper has no time for “yes men.” He wants to be challenged. He wants new ideas and fresh perspectives. Perhaps that’s why Cooper, 46, has risen through the ranks quickly.

USA Hockey caught up with the Lightning’s bench boss to talk about utilizing assistant coaches, winning and player development.

USA Hockey: How much do you rely on your assistants?

Jon Cooper: First and foremost, the media demands in the NHL – you’re pulled away from your team constantly because of appearances, media demands, management – there are so many things that pull you away. You need to have unreal assistants.

USA Hockey: How are those responsibilities doled out?

USA Hockey: Is it good to disagree with your coaching staff sometimes?

Jon Cooper: You can’t surround yourself with “yes men.” When I got to the NHL, I hired guys I didn’t know. I hired guys that had been head coaches for a long time. I hired guys that have been in the league for 35 years. I did this knowing fully well that they were going to disagree with stuff that I wanted done. I don’t want a bunch of “yes men” around. I want guys that are going to challenge me. Ultimately, in the end, as the head coach, you know you have the final hammer, but you need to hear insight from other sides. More often than not, I’ll still do what I believe. But you’d be surprised how many times I’ve changed my mind after being shown a different perspective.

USA Hockey: Even as an NHL head coach now, do you seek advice from other coaches/mentors? Should coaches always seek advice, especially at the youth levels?

Jon Cooper: I’ve reached out to other coaches in the NHL on what to do and how to do it. I still do it now. The day you stop doing that is the day you think you know everything. Nobody knows everything.

USA Hockey: How important is it to find quality people for a coaching staff at the younger levels?

Jon Cooper: You have to find somebody that is fun and that does it for the right reasons. If you’re coaching youth hockey to make a paycheck or to make sure your child gets the most ice time, you’re in it for the completely wrong reasons. Those are the people you have to stay away from. The best people are the ones who are in it for the love of the game. People that might not necessarily have a child on the team but they are there because they love to do it and they love to give their time back. Ultimately, you coach the game so kids will have fun so they will continue to play the game. You can’t coach the game at the youth level thinking that you’re putting every one of your players in the NHL. If you start thinking like that, everything goes wrong.

USA Hockey: How important should winning be?

Jon Cooper: Naturally, you want to win. Everybody competes because you want to win. But coaches shouldn’t chastise players for losses. You should be graded on your effort. If you’re competing as hard as you can all the time, the wins and losses don’t matter. Make sure they’re having fun.

USA Hockey: Sometimes prospects are rushed to the NHL too soon. We often see youth hockey players rushed to the next level by parents as well. What’s your advice to those players that are tempted to move up but aren’t ready?

USA Hockey: You mentioned making sure it’s fun for the kids. To accomplish that, does the coach need to make sure he/she is having fun and enjoying the game as well?

Jon Cooper: I think that goes hand in hand. You need synergy on your staff. Work hard and have fun – and if the players see that, they feed off it. If the players see you’re miserable, they’ll be miserable. If the players see that you’re not having fun, they won’t have fun. The greatest success that I’ve had is with teams I’ve had the most fun with. That recipe has worked all the way up for me. Even at the professional level, you can’t treat it as a job 24 hours a day. Make sure the kids have fun and the rest will work out on its own.