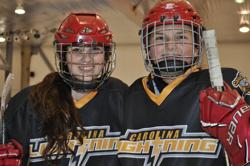 The Carolina Lightning certainly has an appropriate name, as the girls’ hockey program is taking the Raleigh area by storm.

Starting as just an Under-10 program a year ago with about 15 players, the Lightning has already expanded into four teams with more than four times the number of players.

Coach and program president Kevin Thomas is pleased and excited about the Lightning’s growth, which was aided a bit by the disbanding of another area program.

“The girls really want to learn, and girls’ hockey is an area that can be overlooked,” Thomas said. “We’re really happy with the growth of the program in having four teams this year.”

Players such as Emma Flynn, captain of the U16 program, are happy to be part of the Lightning.

“For me, it has been a great opportunity to be a part of this program,” she said. “This is our first time to have a team with which we can represent North Carolina. We have gotten so lucky this year with a group of great people and great coaches who really want us there. This is our chance to really develop our hockey and our team friendships.”

It’s not all sticks and pucks, however, as Flynn points out. The travel and schedule can be grueling, with three games sometimes crammed into a day or so. There are also numerous sacrifices to be made in order to be part of the Carolina Lightning.

“Many people our age don't understand how much effort we put into this sport,” she said. “When we can't go to a school dance, or football game, it is most likely because we are at hockey practice. We are more than willing to give a dance or game up for a nice practice, and I think that this is why my team is so special. We are all friends to each other. We see each other so much, there is no way not to be as close as we are.”

Robin Davis, whose daughter Kelly McCarthy plays on the U16 squad, is pleased at how well-rounded the young women are becoming on and off the ice.

“I am constantly amazed at the dedication these girls have to the sport of hockey and each other,” Davis said. “I believe that this sport above all others teaches a great sense if work ethic and discipline. Because of the team's location there is a lot of travel involved for games.”

Indeed, the team often plays games in places as far away as New Jersey, Ohio and Washington, D.C.

While the squad posted an impressive win over a more-established D.C. squad in a recent contest, Davis also appreciates that the program also emphasizes education, and slacking off on schoolwork will not be tolerated.

“Most of the girls are carrying very heavy AP courses and are juggling schoolwork in the car, between games and practices,” she said. “They work incredibly hard on and off the ice yet still manage to have fun and support each other, even with all these pressures.”

Kelly McCarthy said she is excited about all the levels of the Carolina Lightning, including the semi-competitive U14 team and more developmental level U12 teams under its umbrella. The program also utilizes the American Development Model in practices.

“It is great to see that so many girls in North Carolina are playing hockey since it is not traditionally a hockey area,” she said. “A few of us have been playing together since U12, but we have added new players to. It is good to see that we have teams at multiple age levels now, and I love to see all of the younger girls playing hockey. I hope they love this as much as I do.”

“The travel and responsibilities of being on this team and representing Carolina Lightning helps you grow as a person,” she added. “We try to be mentors and set good examples to the younger teams both on and off the ice. Respect for self, teammates, coaches and officials is our goal.”