Keith Tkachuk’s View Behind the Bench 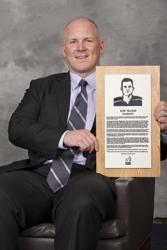 Keith Tkachuk is known for scoring goals and setting up teammates, but these days he’s developing young players and guiding youth coaches. The retired NHL veteran of 19 years, who scored 538 goals and was inducted into the U.S. Hockey Hall of Fame in 2011, is helping coach the St. Louis AAA Blues Bantam Major team, where one of his sons is playing.

He recently took on a new title, Director of Coaching and Player Development, within the St. Louis AAA Blues association. Tkachuk now oversees those areas of hockey operations at all age levels. He’s helping hire coaches and making sure practices are running smoothly.

USA Hockey sat down with the U.S. Hockey Hall of Famer to discuss life as a youth hockey coach, parent and everything in between.

USA Hockey: How was the transition from being an NHL star to becoming a hockey parent and eventually a youth hockey coach? Are you seeing things a little differently?

Keith Tkachuk: Absolutely. When I was playing, I had some chances on off days to go out on the ice with the kids and help out the coaches. It’s a little different now. I’m fortunate that my kids like hockey and they like having me around. It was a good opportunity for me to give back to the game of hockey.

USA Hockey: You’ve seen both ends of it then. What kind of relationship do you try to establish with the parents of your players?

Keith Tkachuk: It’s important that everybody’s on the same page. We always stress “It’s all about the kids.” Myself and the head coach, Jordan Janes, try to relay that message. We’re all here to give these kids a chance to develop both on and off the ice.

USA Hockey: Are there ways you can use parents to your advantage? A way you can all work together to help the team as a whole?

Keith Tkachuk: Absolutely. At home games, there are times when the coaches need help from the parents to work the game clock. We need a manager up in the stands working the stats. And when you’re on the road, I know it’s a little thing, but it’s nice for them to make sure we have food back at the hotel ready to go when we get back so they can eat and get their rest before their next game in the morning. It’s little things like that, whereas a coach doesn’t have to be doing 10 different things at once. He has the most important job of developing the kids on the bench and on the ice.

USA Hockey: There might be a negative connotation out there when it comes to parents in youth sports. But isn’t it crucial to work together with them and look at it as more of a partnership?

Keith Tkachuk: Our coaches believe communication is important. We’ll check in with parents to see how kids are doing. Sometimes you can see in practice that a kid’s not performing well. Maybe he has other things on his mind with school or different things. We always have that open policy where we reach out and see if there are any problems. It’s not communication about why their kid is not on the first line or the top power-play, but it’s about the overall well-being of the kids.

USA Hockey: What do you think youth hockey players need to work on the most?

Keith Tkachuk: These kids nowadays are far more ahead of schedule than I was. The game has changed. I love the fact that these kids are working on skating and skills. That’s basically the only thing you should be thinking of at an early age when you’re running practices.