CORONADO, Calif. -- The white sands and gentle waves of the Pacific are about as far from the hockey rink in Sochi, Russia, as the U.S. National Women’s Team can get.

Yet on a recent weekday morning, the 25 players of Team USA were on the Coronado beach near San Diego, playing what looked like silly games while attracting a few strange looks from the nearby bodysurfers and strolling couples.

Players were split into teams and pitted in competition. Instead of passing the puck, they were passing bagels to one another with candy straws, running in tandem while holding a tennis ball between their skulls or charging through spinning jump ropes, trying not to get hit.

It was all part of a five-day team-building trip to the U.S. Olympic Training Center in Chula Vista that included exercises to build team unity, mental sharpness, communication and leadership as part of preparation for the Olympic Winter Games in February.

For the players — who wore shirts with slogans such as “Our Team, Our Time” and “Become Better” — it was a nice change of pace. And it was a useful trip, too.

“It was unbelievable,” said former University of Wisconsin standout Meghan Duggan, a forward who was on the U.S. silver-medal team in Vancouver in 2010. “I think we all learned a lot. It was very different. Taught us a lot of things that we can apply to the ice, apply in the locker room.” 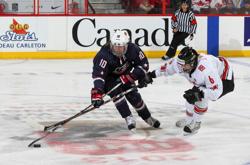 Duggan, 26, said the drills on the beach might have looked frivolous to an outsider, but they weren’t. At the end of the morning session, the entire team sat with its team-building coach and discussed the things they’d learned, such as communication, organization, persistence and efficiency of effort, similar to the teachings of former UCLA basketball coach John Wooden, who said: “Be quick but don’t hurry.”

“It’s always serious,” said Duggan, laughing, in discussing the morning competitions. “We’re clawing at each other, we’re trying to win. We’re so competitive.”

Now, however, the team will get back on the ice to begin training in earnest for the schedule of games against top teams that will help fine-tune the U.S. squad for Sochi and determine the final Olympic roster of 21 players.

The U.S. will play Canada at least four times — the first time Oct. 12 in Burlington, Vt. — as well as Sweden and Finland.

For Duggan, who won the Patty Kazmaier Award in 2011 as the nation’s best collegiate player, this second chance to be part of an Olympic team is one she’s grateful to have. Four years after Vancouver, she’s one of the more established players and she believes she’s raised her game to new levels, too.

“I definitely feel like a stronger person, a stronger leader and a stronger player, and I’m just excited to bring that to my team,” she said.

Since leaving Wisconsin, she’s played professionally for the Boston Blades of the Canadian Women’s Hockey League while also being a big part of the U.S. team that won the gold medal at the IIHF Women’s World Championship in April in Ottawa.

Though she was honored as a great player at Wisconsin — where she’s the program’s all-time points leader — Duggan said she’s a better player now.

“Once you’re not in school anymore and you’re playing hockey for a living, it’s your sole focus,” Duggan said. “I think you eat, sleep and breathe it, and anything you do off the ice, you’re just training yourself for what you’re going to do on the ice, mentally, physically, whatever.”

At the world championships, Duggan scored a second-period goal in a 3-2 victory over Canada in the championship game and played in all five games as the U.S. went 4-1 — the only loss coming in the preliminary round to Canada, also by a 3-2 score.

Duggan says the gold medal gives the U.S. plenty of confidence as it works toward Sochi.

“I’d say we’re the best-coached team in the entire world,” she said. “I think that’s a huge reason why we were so successful at this past world championships.”

She said she and her teammates have bought in completely to coach Katey Stone’s system, the players know their roles and they’ve taken their fitness to a higher level under strength and conditioning coach Mike Boyle.

Now, says Duggan, Team USA is eager to leave the beach, get back on the ice and start playing the world’s best in their tune-up schedule.

“Throw us right into the ring of fire,” she said. “We want to learn where we’re great, where we’re not great and what we need to get better at."