Katey Stone: “My singular focus is on Team USA”

With less than six months to go until the Sochi 2014 Olympic Winter Games, Katey Stone will officially become a Harvard hockey fan in September.

Stone, the Harvard women’s hockey coach who doubles as the U.S. National Team coach, is taking a leave of absence from her duties in Cambridge, Mass., until April. Maura Crowell will serve as interim head coach in Stone’s absence.

“I obviously will be watching from afar, more from a fan standpoint than anything else,” Stone said during a telephone interview on Thursday afternoon. “My staff at Harvard has already picked it up and moved forward. That shouldn’t be an issue at all.

“My singular focus is on Team USA.”

And while Stone couldn’t quite believe that as of Thursday there were 161 days left until the Olympics start in Sochi on Feb. 7, she was also thrilled to be able to practice regularly with Team USA now that they are in the home stretch.

“I know, it’s crazy,” she said of the Winter Games being so close. “It’s great though, it’s exciting. Everybody is fired up. It’s time to get going. I think the biggest thing is now we really get to go to work in practice on a consistent basis. When we have selection camps we have very limited emphasis on practice.

“That’s our focus now: Make sure the players know what they are doing on the ice and we have plenty of time to rep everything. We want to get the kids into really good habits and get them to be predictable to their teammates.” 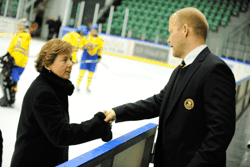 The 25-player roster, which will train in Bedford, Mass., starting in early September, will practice five or six days a week. Stone said the players will be on the ice no more than two hours a day. She said they will not do double sessions either.

“Often time when you do that kind of thing you don’t have time to get ready and need to condition more,” Stone said. “We don’t need that. We felt like we have plenty of practice time and we are where we need to be. And the kids are in terrific shape, so we’re in a good spot.”

She also said they will not overdose on film.

“It will vary,” she said. “We’ll take some practice video and video all our games. It will be situational. We’re not going to overkill video; philosophically that’s not my style. We’ll do special situations and individual video on a regular basis two to three times a week, but we’re not going to do it ad nauseum. They will be short stints.”

In December the team will be cut down to the 21 players that will travel to the Winter Games. Stone said that decision will be difficult, but she said that that’s a good thing.

“I can tell it will probably be really difficult,” Stone said. “That’s the main thing is that we feel great about the 25 kids we have, and now we anticipate them all getting substantially better between now and December and between now and February.

“It’s a great thing. It’s exactly what it should be at this level.”

Stone, who took over the national program in 2010, hopes that approach is the winning equation for solving Canada and Team USA’s other foes in February.

Team USA defeated the Canada 3-2 on Canadian ice in the finals of IIHF World Championships in April, giving the Americans their fifth title in the last seven quasi-annual world tournaments since 2005.

But the U.S. women have failed to earn gold at the Olympic Winter Games since the program won the inaugural Olympic women’s hockey tournament in 1998. Team USA won silver behind Canada in both 2002 and 2010.

Stone said she’s looking to strike a balance between building on the success at the World Championships in April and not letting it make them complacent.

“I think it’s little bit of both honestly,” she said. “It gives you some confidence and more than anything else it allows you to feel like, ‘Hey we’re pretty darn good,’ which I think is important.

“By the same token, you are only as good as your last game, and our kids know that.”