The 2014 Paralympic Winter Games will take place March 7-16 in Sochi, Russia. All sled hockey games will be played at Shayba Arena.

"We're incredibly pleased with the roster we have built for the 2014 Paralympic Games," said Dan Brennan, general manager of the U.S. Paralympic Sled Hockey Team. "The talent pool in the U.S. has expanded rapidly in recent years, which made the selection of players very difficult."

"I am excited about the players we have selected," said Jeff Sauer, head coach of the U.S. Paralympic Sled Hockey Team, who is in his third season leading the U.S. National Sled Hockey Team. "We have a great mix of Paralympic veterans as well as some younger players who are ready to take the next step internationally. "

NOTES: Team USA's roster will be trimmed to 17 players by Jan. 1, 2014, to conform to the Paralympic Games roster limit ... The U.S. roster is subject to approval of the United States Olympic Committee ... The youngest player on the roster is Brody Roybal (Northlake, Ill.), who turned 15-years old in May and is making his debut on a U.S. National Team. Declan Farmer is also 15-years old and will turn 16 in November ... The oldest player on the squad is Andy Yohe at 35-years old ... Four members of the team have served in the U.S. military. Jen Lee is active duty in the U.S. Army. Rico Roman is a U.S. Army veteran, while Paul Schaus and Josh Sweeney served in the U.S. Marine Corps ... Dan Brennan (Colorado Springs, Colo.), director of sled and inline national teams for USA Hockey, is serving as the general manager of the 2014 U.S. Paralympic Sled Hockey Team ... Guy Gosselin (Grafton, Wis.), American Development Model regional manager for USA Hockey, is in his third season as an assistant coach for the U.S. National Sled Hockey Team ... Additional staff members include team physician Mike Uihlein (Grafton, Wis.), athletic trainer Mike Cortese (Boynton Beach, Fla.) and equipment manager Joel Isaacson (Houghton, Mich.). 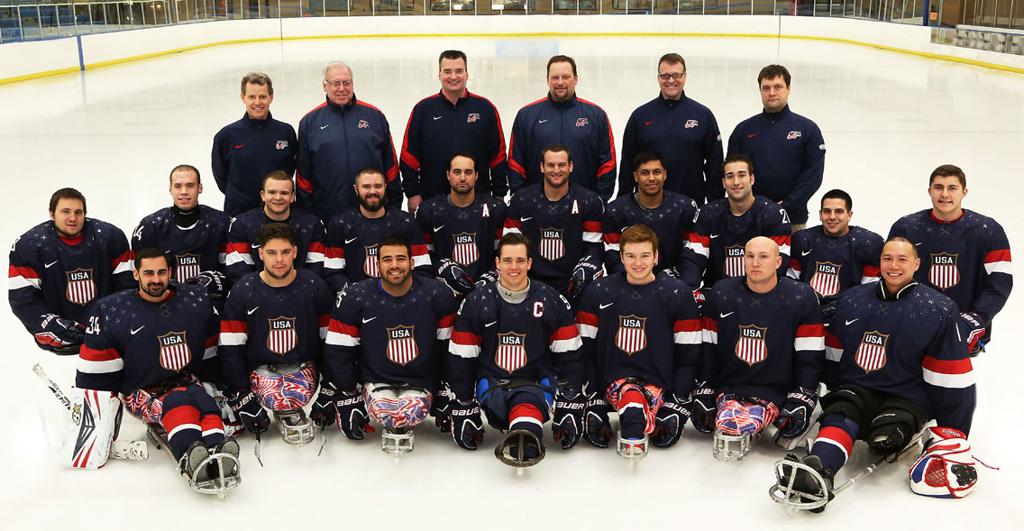