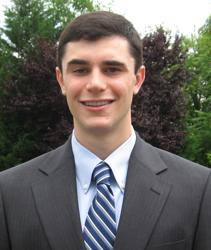 Minton will be based at USA Hockey's National Team Development Progam in Ann Arbor, Mich., and begin his duties in late August. His responsibilties with include interface with the NTDP, national teams, international events, and player development camps. He will also gain exposure to USA Hockey's acclaimed American Development Model and Coaching Education Program.

Established in April 2010, the Brendan Burke Internship is awarded annually to a recent college graduate who is pursuing a career in hockey operations. The internship was founded in memory of the late Brendan Burke, who served as a student assistant for the Miami University men’s ice hockey team and was the son of Brian Burke, director of player personnel for the 2014 U.S. Olympic Men’s Ice Hockey Team, general manager of the 2010 U.S. Olympic Men’s Ice Hockey Team and current professional scout for the NHL’s Anaheim Ducks.

Brendan Burke passed away in an automobile accident on Feb. 5, 2010.

Minton, who graduated from Saint Joseph’s (Pa.) University in May with a master’s degree in biology, worked last season as both the director of hockey operations for the Neumann University men’s ice hockey team and as an assistant coach for the Saint Joseph’s University men’s ice hockey team. With Neumann, his responsibilities included in-game video breakdown, analyzing team systems and assisting with on-ice practices. With Saint Joseph’s, Minton was responsible for player development, player recruitment and the implementation of in-game defensive matchups, special teams systems and faceoff instruction.

He also spent time as interim head coach for the University of Pennsylvania’s men’s ice hockey team during part of the 2010-11 season and the entire 2011-12 season, as well as a stint working with the Ed Snider Youth Hockey Foundation and Philadelphia Flyers as a hockey operations intern.