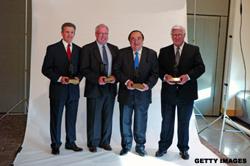 ST. PAUL, Minn. -- This was a night to celebrate not just the sport of hockey in the United States, but the family of hockey.

Four men -- Mark Johnson, Bob Pulford, Tony Rossi and Jeff Sauer -- were honored Wednesday night as the Class of 2011 for the Lester Patrick Award at RiverCentre for their contributions to the sport in the U.S. All were deserving, and all in one way or another talked about the role of hockey in their families and about the greater family in the sport.

"The thing people sometimes forget about hockey is it is a close-knit community," Sauer said. "I've walked down Red Square (in Moscow) and had someone come up to me and say, ‘Hey coach, how are you doing?' It was a guy I had coached against in a world championship, one of the assistant coaches from Russia. It is a small community, and you don't see that in other sports."

Added Rossi: "The people in this sport have been phenomenal, and I do feel it is different than other sports because it always seems so family-oriented. Just with the rivalry we have Canada is really something to see, especially with the U-20s, but the guys at Hockey Canada like Bob Nicholson andMurray Costello -- they've stayed at my place in Florida. You're enemies on the ice, but when the game's over, the game's over. It is just a real family relationship. Now we've been able to meet people from all over the world and we've made such great friends in the sport."

Johnson could be here for his two goals against Russia in the 1980 Winter Olympics and his 11-year NHL career, but he's also had a remarkable impact on women's hockey, both as a coach at the University of Wisconsin and with the U.S. National Team.

Pulford was one of the original pioneers of hockey in southern California, moving there as a player and then becoming the first successful coach of the Los Angeles Kings before they traded for Wayne Gretzky. After that he had a long career as an executive for the Chicago Blackhawks.

Rossi began as a volunteer at the youth level in Illinois and has risen through USA Hockey to be a man of incredible influence at both the national and international levels of the game.

"The state of hockey is probably the best it's ever been," NHL Commissioner Gary Bettman said. "I think it is quite strong. I think it is probably unprecedented in terms of participation and interest in the game at all levels. That's a testament to the four individuals being honored here tonight."

Sauer won more than 600 games at the college level, including two national championships at Wisconsin. He's also coached the U.S. Deaf Olympic team and has been working for more than a year with the U.S. Sled Hockey team as well as consulting for the Western Collegiate Hockey Association.

These four have connections to so many people through the game of hockey, including each other. Sauer played, not just hockey but baseball as well, for Johnson's dad, Bob, and was an assistant coach for him at multiple stops as well. He even stepped in as a babysitter when needed for Mark and his brother when they were kids.

"He was a little hell-raiser," Sauer said. "Mark has always been a great athlete, and I mention this many times -- he's the type of athlete that can pick up anything. He can play baseball, he play golf, anything. He went through a bit of a rebellious period as a kid, but what's he done as a player and a coach have been amazing to see."

Sauer said he's known Rossi for 25 years. Rossi was a season-ticket holder at Chicago Stadium when Pulford was working for the Blackhawks -- and as he found out recently, his grandson and Pulford's grandson are defense partners on a youth team near Chicago.

All four recipients were honored at an hour-long ceremony with several previous winners in the audience. After they were bestowed with the honor, the quartet answered questions about the sport, whether it was favorite memories from a great team or their thoughts on the future.

"I certainly think hockey is very, very popular now and I think a lot of that has to do with USA Hockey," Pulford said. "They've done a tremendous job, and certainly the NHL as well. The new rules -- I was certainly not a great advocate of them but as time has gone on, Mr. Bettman, I am now starting to like them a lot. The game is very exciting now and I think it can keep being even more exciting."

Added Rossi: "I think we just don't stop selling the sport. If you get those 5-, 6-, 7- and 8-year-olds out there, you don't have to worry about college hockey or professional hockey. If that base of the pyramid gets big enough, you'll have the quality up at the top. Don't rest on your laurels -- just keep selling the sport."