Contributing to the overall efforts of Team USA during the IIHF Men’s World Championship is Ryan Breen, the recipient of the Brendan Burke Internship for 2012-13. 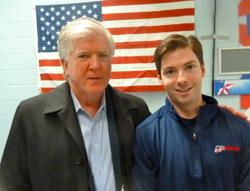 HELSINKI, Finland -- Contributing to the overall efforts of Team USA during the IIHF Men’s World Championship is Ryan Breen, the recipient of the Brendan Burke Internship for 2012-13, a program designed for recent college graduates with an interest in hockey operations as a future career.

“Being here is kind of a surprise,” said Breen, 24, following the U.S. team’s Monday skate. “I didn’t think I would come to the men’s world championship here in Finland so it’s been a great opportunity to be here and be a part of it.”

The ten-month internship was established in memory of the late Brendan Burke, the son of Brian Burke, a member of the U.S. Men’s National Team Advisory Group. Brendan passed away as a result of a car accident on Feb. 5, 2010, at the age 21. He was a student at Miami University and served as a hockey operations assistant with the men's ice hockey team.

“USA Hockey was kind enough to establish the Brendan Burke Internship and Ryan Breen is our third intern,” said Brian Burke, who is in Helsinki with the team this week in his role as a member of the U.S. Men’s National Team Advisory Group. “Ryan has been terrific as were the first two interns and we intend to keep that streak going.

“I think the internship is a nice way to keep the memory of my son alive as he was a hockey person, a brave young man and a good young man.”

Breen, a graduate of Providence University in 2010, who also attained a master’s degree in business administration, seems ready, willing and able to serve USA Hockey and the team in any capacity during the fortnight in Finland.

“Pretty much anything they need,” Breen said, when asked about his role. “I’m kind of just an extra set of hands. Hopefully, I can take on a hockey operations role somewhere permanently full-time after this year.

“I think just being around Brian Burke and Dale Tallon, to see how these guys work and see the day-to-day operations is great,” he said referring to two of the most accomplished and successful people in the game.

“With the Brendan Burke Internship, it was initially based mostly in Colorado Springs,” Burke said. “But we quickly realized that it wasn’t the best place to get operations experience so the intern now spends the majority of time with the NTDP in Ann Arbor and actually travels to a couple of tournaments getting operations experience.”

“With a tournament like this – even though the host country does a lot of work on the local level – there is a tremendous amount of detail work, for example immigration, and that’s where Ryan and the interns before have been invaluable,” Burke explained.

“It’s been great so far,” said Breen, who also interned with the Boston Bruins in 2011. “The internship was created in the memory of Brendan Burke and the Burke family has been absolutely great, keeping in touch and making sure I get all these opportunities this year. It’s been an unbelievable experience – I’ve traveled to Finland, Quebec and all over the world for these tournaments.”

And what is the most exciting and rewarding aspect for Breen regarding his time at these world championships?

“Just being around the guys in the locker room and at the hotel…I know some of them personally going back a few years, but seeing these NHL players on TV, it’s been a pretty cool experience getting to know them on a personal level,” Breen said. “Just being here is great.”

Team USA (2-0) had a day off on Monday, but skated at the Hartwall Arena practice rink in preparation for Tuesday night’s game against Russia (2-0), as the two nations are the only remaining unbeaten teams in Group H.