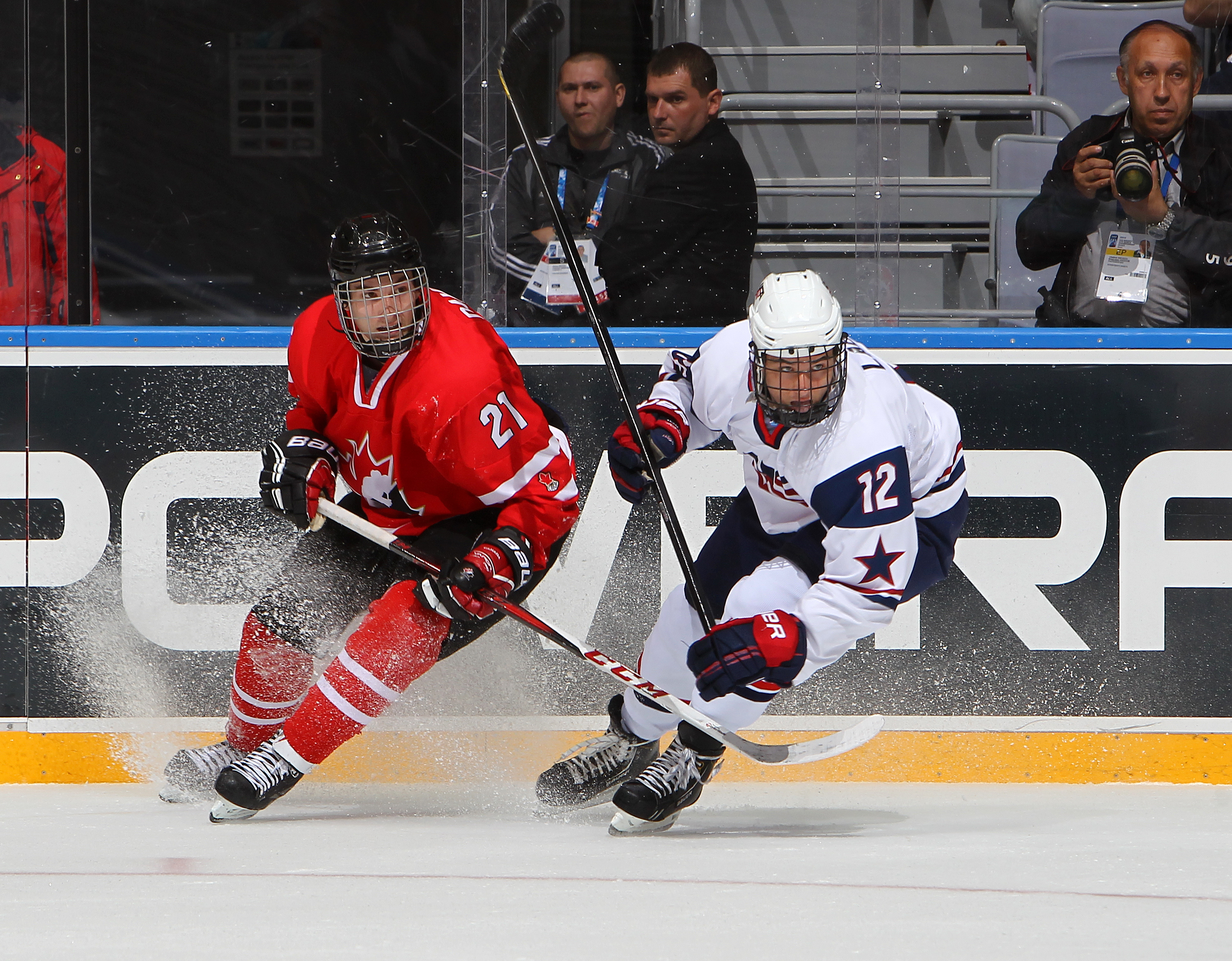 Kevin Labanc skates along the boards against Canada in the gold-medal game. Photo courtesy of HHOF-IIHF Images.

SOCHI, Russia – Despite a 35-12 shots-on-goal advantage, the U.S. Men's National Under-18 Team fell to Canada by a 3-2 count here tonight at the Bolshoy Ice Dome in the gold-medal game at the 2013 International Ice Hockey Federation Under-18 Men's World Championship.

With its silver-medal performance, Team USA has now earned a medal in the IIHF Under-18 Men's World Championship a record 10 straight years.

"I'm extremely proud of our effort tonight," said Don Granato, head coach of the U.S. National Under-18 Team. "It was two outstanding hockey teams battling and unfortunately we came up just a bit short."

Despite putting 14 shots on goal in the opening 20 minutes, the U.S. found itself traililng by a 1-0 count after the opening stanza.

Team USA evened the game just 1:48 into the second period thanks to Connor Clifton (Matawan, N.J.). Standing just inside the blue line, Clifton wristed a shot through traffic that beat Canadian netminder Philippe Desrosiers. Hudson Fasching (Burnsville, Minn.) collected the lone assist. The U.S. took its only lead of the game when Michael McCarron (Macomb, Mich.) charged out of the corner and lifted a shot past Desrosiers at 9:42. Tyler Kelleher (Longmeadow, Mass.) earned an assist. Canada tied the game at 12:48, jamming the puck past an outstretched Thatcher Demko (San Diego, Calif.) and then scored what proved to be the game-winner with 3:24 left in the middle period.

The U.S., which put 10 shots on net in the third period, had a power play the final :42 of the contest and with Demko pulled had a six-on-four advantage, but could not get the equalizer.

There were just four penalties whistled in the game. The U.S. was 0-3 on the power play, while Canada was 0-1.

Best Players of the Game