The Philadelphia Flyers draftee swaps red, white and blue for scarlet and white

Devin Kaplan got off to a solid start in his freshman season on the Boston University Men’s Hockey team, scoring on the first shot of his collegiate career.

The Bridgewater, New Jersey, native notched the goal and added an assist in a 8-2 season-opening win over Bentley back on Oct. 1.

“It’s really important for those guys to have confidence right off the hop,” first-year BU head coach Jay Pandolfo said after the win.

Kaplan, 18, skated for the U.S. National Team Development Program in Plymouth, Michigan, the last two seasons. His dream of playing professional hockey took a big step this summer when he was chosen by the Philadelphia Flyers in the third round of the 2022 NHL Entry Draft. 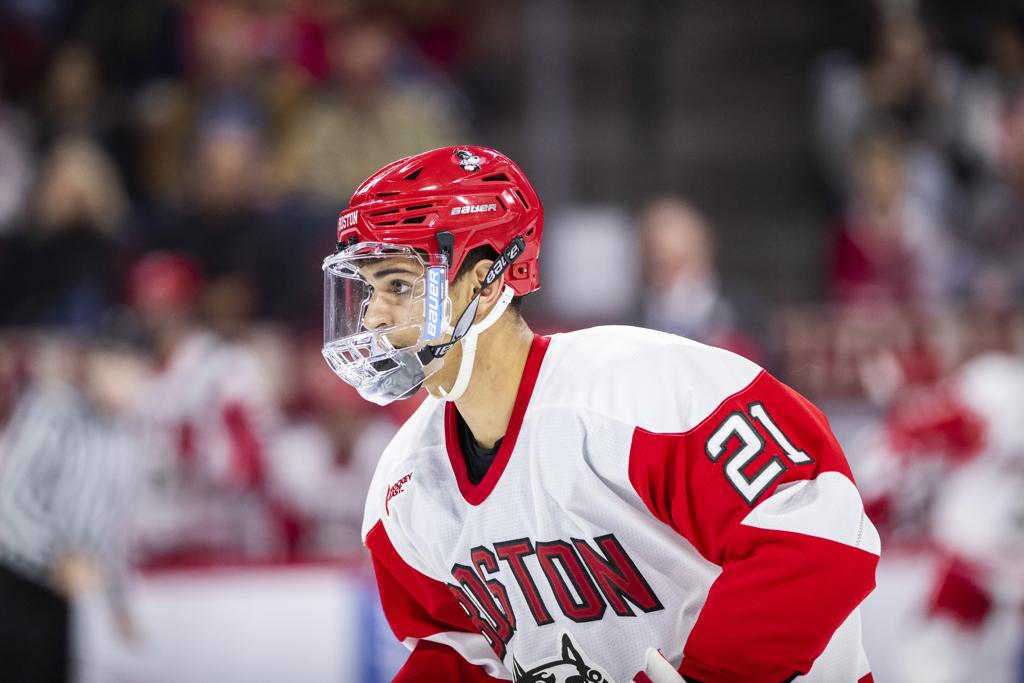 “It was unbelievable,” said Kaplan, who was in attendance at the Bell Centre in Montreal during NHL Draft weekend. “I turned to my family, and it was really cool that they were there with me.”

Kaplan is the third individual in his family to play college hockey. His oldest brother, Jordan, skated for both Sacred Heart University and the University of Vermont, while his other brother, Jalen, played for Colby College.

The week after the draft, Kaplan attended a development camp with other Flyers prospects. That’s where he met new Philadelphia head coach John Tortorella.

“He spoke to us as a group,” Kaplan said, “and seeing him for the first time, I got goosebumps. He’s a legendary coach, and it was the cherry on top for me.”

Having worn the USA jersey full-time the past two seasons, Kaplan is now swapping red, white and blue for scarlet and white, but he looks forward to the next time he’ll don a star-spangled uniform in international competition.

“It’ll be unbelievable,” he said. “Every time I put it on, it was a surreal feeling and a privilege, and you wanted to make the most of it. I realize it even more now that I’m not in the [NTDP] program, and it makes it more special for me.”

Now it’s about learning the ropes of the collegiate game and progressing enough at the NCAA level to bolster his hopes of making it to the NHL later on.

And here's another freshman lighting the lamp in his debut ... Devin Kaplan!

“After that [draft] day, no one cares,” Kaplan said of past success. “My focus is on going to BU, doing the best I can there, developing and seeing where I get afterwards.”

His road from Plymouth to Boston began in northern New Jersey.

“I was four or five,” Kaplan said. “I was always at the rink, following my older brothers and going to their lessons. I fell in love with it, and my parents decided to put me on the ice.”

Kaplan spent eight years skating with the New Jersey Rockets program before joining the North Jersey Avalanche for three years. He tallied 50 goals during his tenure with the Avalanche, which was good enough to earn him a spot with the NTDP.

“They did some scouting, and invited me to try out,” he said. “It was based off your play throughout the year, and it was how they picked the team.”

Kaplan played for the Under-17 and Under-18 teams in his two years with the NTDP. He also gained valuable international experience playing in the 2021 Under-18 Five Nations Tournament in Switzerland, helping the U.S. capture the title. A year later he earned a silver at the 2022 World Under-18 Championship in Germany.

“He started his identity as a power forward, and played to that identity a little more,” said current NTDP U17 head coach Nick Fohr, who was an assistant coach for the U18 team while Kaplan played there. “When we got him, he had skill, but he learned to use that with power in a hockey environment. He’s a big, strong kid, and he learned to use his body and his skill to his advantage, which isn’t always easy.”

Kaplan grew up a New York Rangers fan and hopes to play professionally at Madison Square Garden one day. That’ll have to come after developing at the university he always wanted to attend.

“For me, it was BU from the start,” Kaplan said. “Growing up in New Jersey, you go to Boston a lot for tournaments, and I fell in love with the city.”

Fohr feels that Kaplan can make an impact at BU right away.

“He’s a great kid, and he was a joy to be around,” Fohr said. “As long as he maintains his identity and focus as a player, to be the best at it, and is held to [high] standards by the BU coaches, the sky’s the limit.”

“As he gets bigger and stronger, he’s going to be a pretty hard player to play against and to deal with, especially around the net,” he said.