Juan Ruelas has Dedicated his Life to Youth Hockey in Kalamazoo

Juan Ruelas could have been doing any number of things on the Sunday of Labor Day weekend.

But instead of firing up the barbecue or some other family activity, Ruelas was overseeing the ripping out of the carpet on the second floor of his home in Kalamazoo, Michigan. That entailed clearing out three rooms and then putting them back together once the installation of the new carpet was complete.

That is just the type of person Ruelas is: hard-working and unassuming. Always doing something for his family, even on a long holiday weekend.

Ruelas has been an influential hockey coach in Kalamazoo for much of the last decade. He became active with the Kalamazoo Optimist Hockey Association when one of his four sons started playing. His roots are in teaching, which is what he went to Michigan State University to learn how to do. While that career didn’t go as planned, it set a base for being able to be a youth hockey coach.

“He had a younger son that was coming up, too,” KOHA Executive Director Matt Kakabeeke said. “He was able to get his own group of people understanding what we were trying to do and how we want things. So the impact has almost become generational for us because he’s not only impacted those ’07 birth year, but now the ’10 birth year and those kids trailing behind it.” 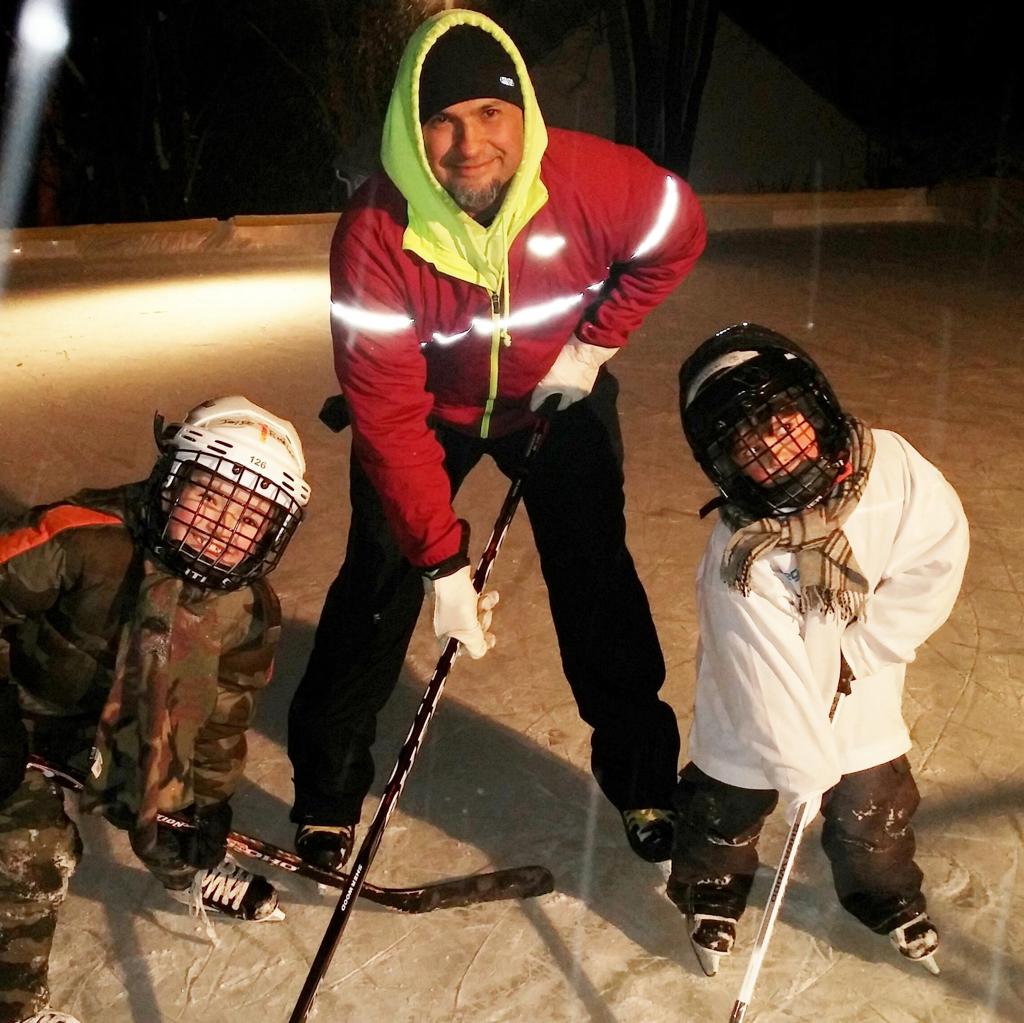 Kakabeeke, 52, knows Ruelas, 51, well as the two grew up and played hockey together as kids before college; work and family had them drift apart naturally.

As one of four boys, his parents didn’t have a lot of money but enough to make do. Ruelas and all three of his brothers ended up playing a variety of sports. One day, another boy down the street had come back from watching the Kalamazoo Wings of the old International Hockey League. This was during the heyday of the K-Wings, when they won back-to-back Turner Cups in 1979 and 1980.

That kid went out into the road with a stick covered in electrical tape and emulated the players he had just watched. The Ruelas brothers became intrigued with the game and became aware of KOHA, which originated in 1965, and told their dad they wanted to play, too.

“Graciously, he started all four of us the same winter,” Ruelas said. “None of us had skated before. He bought us some skates, which were figure skates, and we ground off the toe picks. I learned how to skate in the road. Even in the road, it was brutal. Then we went to a lake here or there.”

One of the obstacles to getting any kid involved in hockey has always been the cost of equipment, but somehow, Ruelas’ dad came up with low-cost versions of what the four boys needed.

“Our equipment was so horrible,” Ruelas said. “We kind of got made fun of a little bit.”

After learning how to play in the 8-and-Under program, their equalizer was their skill level, with the Ruelas brothers letting their play do all of the talking on the ice and at school. Eventually, Ruelas’ older brother made the roster of the Kalamazoo Junior Wings of the NAHL, while Juan instead played at the 16-and-Under level.

Wanting to sharpen his game, Ruelas’ mom would drive him about two hours from Kalamazoo to Detroit to play in a summer league each Sunday. As a Hispanic hockey player, Ruelas was the subject of some racism on the ice. It wasn’t his first experience with racism, but it nonetheless was an eye-opening experience.

“I had a pretty normal upbringing in a diverse population,” Ruelas said. “Then I go in there [to Detroit] and these are my buddies?”

Fast-forward to now having a family of his own — stepsons Malachi and Berkley Cox are 24 and 21, while sons Jesse and J.J. are 15 and 12 — and Ruelas encouraged Berkley and then Jesse to get involved with hockey.

“It's funny because when I started doing that, that's when I ran into Matt again,” Ruelas said. “I haven't seen him since like junior, senior year of high school.”

As fortune would have it, Ruelas and Kakabeeke each had a son born in 2007, so they played on the same team. Ruelas helped coach that group through squirts, peewees and bantams. His approach and communication had an origin in a rough inner-city teaching experience. 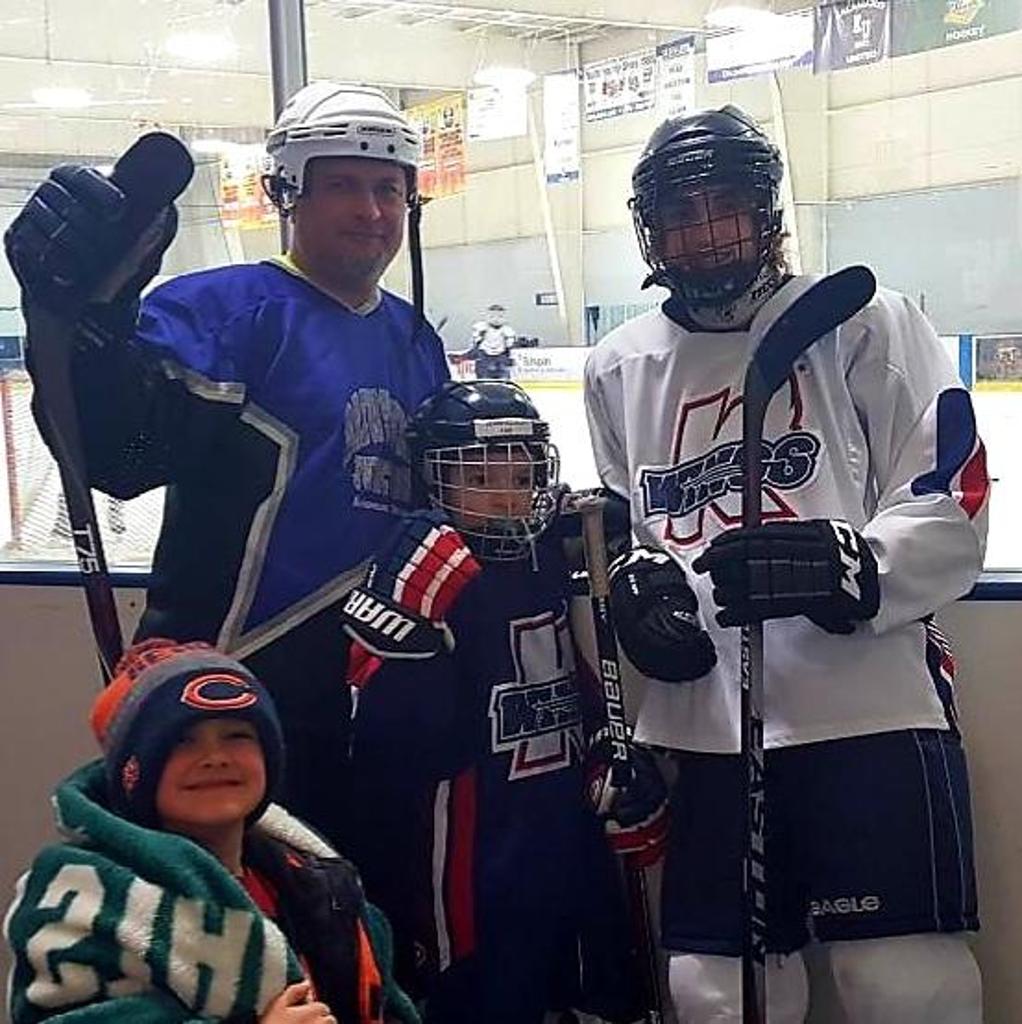 It also helped draw Ruelas in deeper that the 2007 group was the first in KOHA to use the American Development Model as a teaching mechanism. Keeping the players involved with the use of small games and drills to improve and sharpen their skillset was of particular interest.

“I was like, ‘Dude, I can barely do this,” Ruelas said of some skating drills.

During the same time, he and Kakabeeke were coaching the 2007s, Ruelas also became head coach of a 2010s KOHA team that included son J.J., keeping his hockey calendar full.

But this upcoming season will be different for Ruelas. He is stepping aside from his coaching responsibilities after recently getting a promotion at work. Ruelas also wants to spend time watching Jesse and J.J. play. It was a tough decision as Ruelas wanted to make sure there was a good coach to replace him so the young players would still get the instruction they need, but he also just felt the time was right.

“I was like, 'Alright, I'm just gonna be a dad now,” Ruelas said. “In hindsight, I kind of wish I would have not stopped coaching, but my youngest son is 12. I think he could use me as a dad more than as a coach.”

Ruelas will likely find his way onto the ice at some point during the season. While having confidence in the coaches for his son’s team, he classifies himself as a “backup.”

His sudden departure won’t diminish what he has accomplished on the ice with KOHA. He has had an impact on Kalamazoo kids; and he’s still proud of what he accomplished as a player. Ruelas to this day keeps around a newspaper clipping from his junior year in high school that highlighted the play of him and his older brother, who were among the top scorers in their league.

Ruelas has helped KOHA’s efforts in the Try Hockey For Free program as well as attracting kids from the local Boys & Girls Club.

“We have a couple of Hispanic and African-American members in the club,” Kakabeeke said. “When people can walk in and see people that look just like you or similar to you, that just kind of puts you at ease. Growing up as kids, Juan was one of the few Hispanic kids that played in our club back in the ’80s [and provides that relatability] that these kids can see in somebody else.”