Osidach spent over 40 years of his life coaching hockey.

He also became a father figure to countless people throughout the region during a four-decade coaching career.

Thanks to his endless passion for the game, Osidach, who died in 2016, was honored with the 2022 USA Hockey William Thayer Tutt Award.

“I feel grateful that USA Hockey is recognizing his efforts and contributions because he did a lot over a long period of time,” said Tom Dwyer, a former player who eventually became Osidach’s stepson. “It was really pure. He didn’t have any kids in the program. It was purely his passion for the game.”

The Wm. Thayer Tutt Award is presented annually by USA Hockey to a volunteer who, during many years of service, has displayed a selfless dedication to the enhancement of ice hockey at the grassroots level in America.

“John was able to take a group of players that were able to compete beyond D.C. and form a highly competitive program,” said Jeff Halpern, a longtime NHL forward and current assistant coach of the Tampa Bay Lightning, who played under Osidach. “My whole amateur and professional career, people asked about the best coach I ever played for, and I played for some really good coaches, but I would hold John in that group.”

Osidach was born in France to parents who fled the former Soviet Union. He moved to Canada in 1951 and fell in love with hockey. Osidach played for more than a decade in Toronto prior to attending and playing hockey for St. Mary’s University in Halifax, Nova Scotia.

Osidach moved to Washington D.C. in 1973, and his four-decade journey helping hockey advance in the DMV area began shortly thereafter.

“We had rinks at the time, but no one knew how to coach,” Dwyer said. “It’s wonderful to see John be recognized. This is a great recognition for hockey in the D.C., Maryland, Virginia area.”

Osidach first started volunteering with USA Hockey in 1976, as he coached the Chevy Chase Club. In 1979, Osidach, alongside Robert Siblo, founded the Washington Metros, which still exist today as the Washington Little Caps.

Osidach helped the program grow to include all age levels, as he volunteered with the organization for more than three decades.

Halpern was one of Osidach’s star players.

“You see his understanding of the game, the things he said made sense and you start learning from it,” Halpern said. “He didn’t want people to be afraid of going into the corners and the hard areas of the ice. I’m not the biggest player, but I never backed down from confrontations in the corner and those hard areas.” 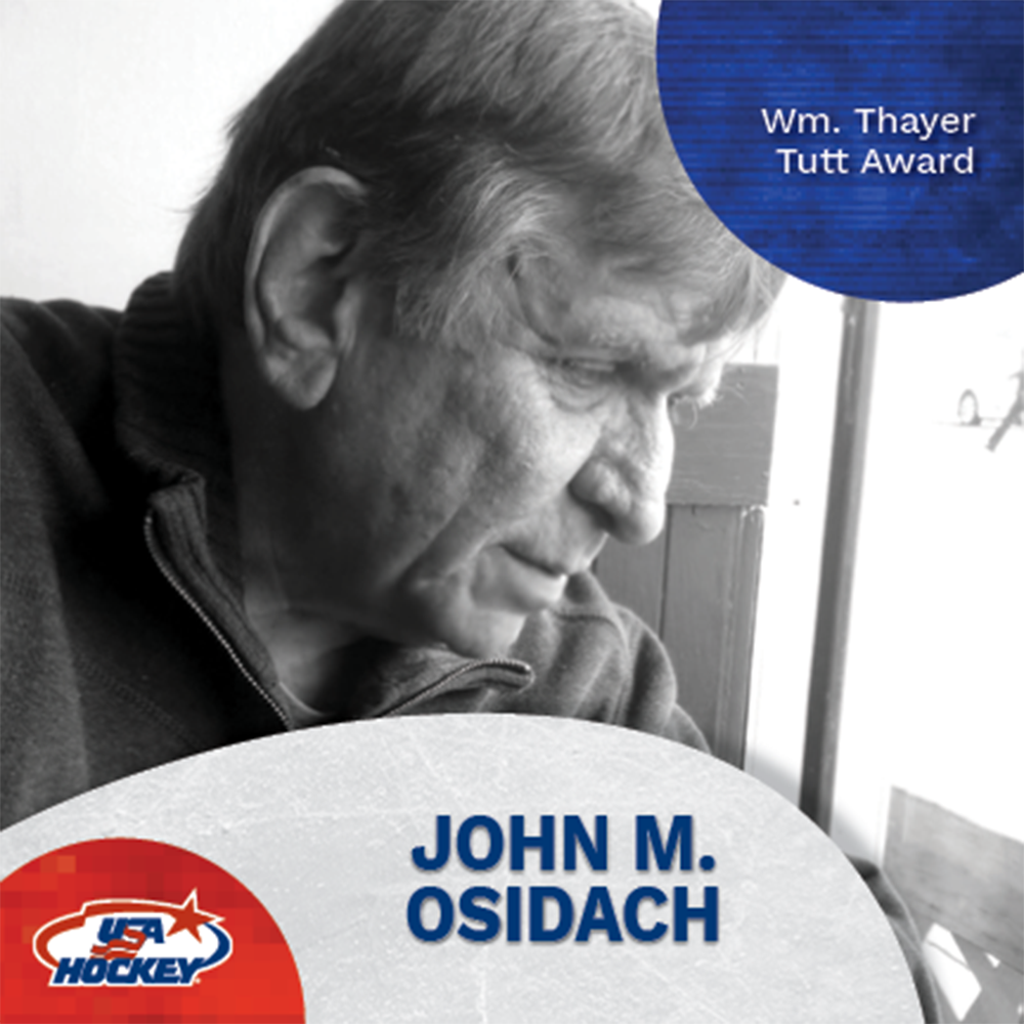 Osidach, who became an American citizen in 1982, spent his early years coaching on the ice, but he also volunteered as an administrator, including many years as the club president. In 1994, he led his youth team to a Tier I national championship tournament appearance and a trip to the semifinal round.

Dwyer said early in his coaching career, Osidach had a vision in which his teams competed against better competition in cities like Philadelphia, Boston, Buffalo and a prestigious yearly tournament in Québec City.

“Nobody would ever come to D.C. to play us, but John was instrumental in getting us into the Mid-Atlantic league,” Dwyer said. “He was always very determined and competitive. He got a lot out of sports, and I think he wanted to give back. He really ran the team for the players and the organization rather than for profit. It was purely for the love of the game.”

In the late 1990s, Osidach helped Kush Sidhu form the first Tier I girls’ hockey program in the D.C. area, which is now known as The Washington Pride. Osidach spent his time volunteering as a coach throughout his three-year battle with cancer. He was coaching on the ice the day prior to his passing in 2016.

“He was very tough as a coach,” Dwyer said. “He set the bar very high, but over time, you knew there was nothing he wouldn’t do for you and the group.”

That was particularly true in his players. Osidach eventually became Dwyer’s stepdad after his father passed away when he was 13. But Osidach also served as a father figure to other players after parents tragically passed away or needed help.

“What’s funny is that I thought I was the only one,” Dwyer said. “But letters started coming in and they said that [Osidach] did that for them, too. He was a huge support and you always knew that he would have your back. That helped me tremendously.”

Halpern observed the same during his early playing career.

“My parents were great to me, but [Osidach] was probably someone who was a little harder on me and he pushed me a little harder than a parent could,” Halpern said. “We had kids from broken homes and troubled pasts and he wasn’t afraid of that. He brought them in and tried to connect. As he got older, he lived close by, so we’d have barbecues at his house and all of the sudden you’d see this hard, demanding coach to a guy who took a lot of pride and happiness in my career and our friendship. Those barbecues are probably the best conversations and experiences I had with him.”

Osidach and Dwyer used to watch Halpern each time he came close to home for an NHL game. Halpern played for seven teams during a 14-year career. That included seven seasons with his hometown Capitals, as Halpern became the first member of the organization to be born and raised in Virginia.

“I’d see him in the stands, and it was great,” Halpern said. “I always felt like when I made the NHL, John made the NHL. There’s a lot that goes into every player that makes it, different friends and relationships and outside of my family, John had the biggest impact of anyone in the Washington area. I would imagine that he was proud to see me out there and I was proud to represent him and everybody else that impacted my career.”