The former Yale player’s passion for the game is second to none.

For Maria Dennis, her life has always centered around hockey — and that still remains the case today.

Dennis is currently the director of player health and safety as well as associate counsel for the National Hockey League Players’ Association. She also currently chairs the NHL/NHLPA Female Hockey Advisory Committee, a joint initiative that began in 2018 to accelerate the growth of girls’ and women’s hockey in North America.

For her lifetime efforts and commitment to the game, Dennis has been recognized as the 2022 USA Hockey Distinguished Achievement Award winner. She will be honored June 10 at the President’s Award Dinner in Denver.

“I do not mind working the long, hard hours because I’m so passionate for this sport,” said Dennis, who lives in South Windsor, Connecticut. “I feel like I’m contributing and making a difference. I consider myself to be very lucky to be able to combine my passion with my career.”

Created in 1991, the USA Hockey Distinguished Achievement Award is presented annually to a United States citizen who has made hockey his or her profession and has made outstanding contributions on or off the ice to the sport in America.

“You look at all of the names on here and the one thing that ties us together is our love and dedication to the sport,” Dennis said. “The 1980 U.S. Olympic Hockey Team, those are my ultimate heroes. I remember exactly where I was when it was announced that they beat the Soviets. They announced it over the loudspeaker while we were on the ice for practice and we all cheered. I’m quite honored that my name is on this list.”

Tim Taylor, the 2006 recipient, was the men’s head coach at Yale when Dennis played on the women’s team.

“I remember he invited me to skate the captain’s practice with his men’s team,” Dennis said. “That was quite the honor. I’ll never forget what he did for me because I got to skate with Division I men’s players at the time.”

Dennis remains the all-time goals and points leader for the men’s and women’s programs at Yale. In 1990 while at Georgetown law, Dennis won a silver medal as a member of the U.S. Women’s National Team at the inaugural IIHF Women’s World Championship in Ottawa. To train for the world championship, Dennis played on the men’s team at Georgetown and she was the only woman to play in the Southeast Collegiate Division. 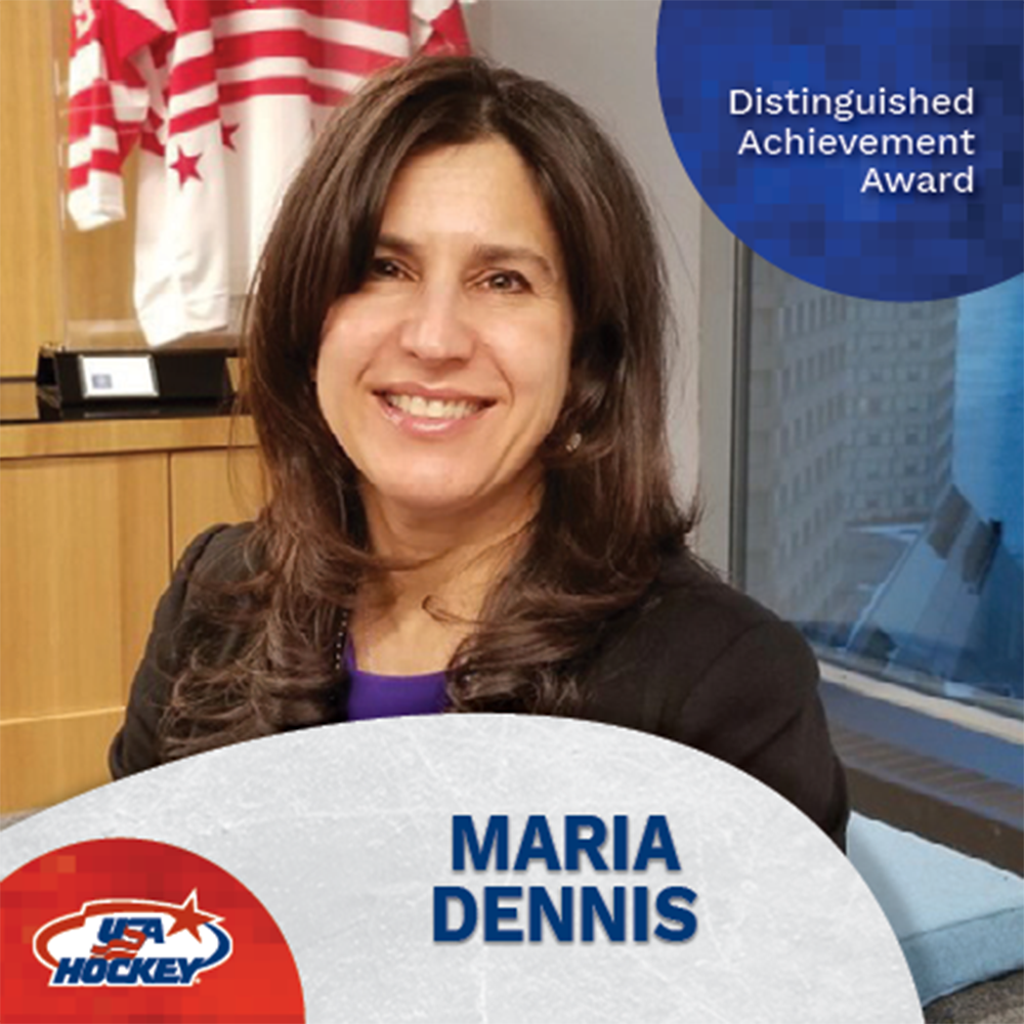 “It’s certainly a huge honor and one that’s very well-deserved for Maria,” said Pat Kelleher, executive director for USA Hockey. “She’s been such a force in hockey throughout her whole life. We’re thrilled to be able to recognize her for this award.”

Dennis started her advocacy on behalf of athletes with USA Hockey in 1991 when the organization was encouraged to place more athletes on governing bodies.

“That started it all,” Dennis said. “I’m really appreciative that I have a job and a career that married my love and passion with the sport of my career. I love advocating on behalf of the athletes.”

Dennis joined the NHLPA in 2011 where she advocates on behalf of the players’ interests with respect to a wide array of health and safety matters, including the players’ right to quality medical care, second medical opinions, a fair and equitable drug testing program, substance abuse and mental health assistance and concussion management.

“She came to the (NHLPA) and really carved out a great space where she’s working on a lot of different projects,” said Mathieu Schneider, a former NHL defenseman and current special assistant to the executive director with the NHLPA. “She has been an amazing advocate for the players and that stems from her understanding the mentality of a hockey player and an elite athlete. To have someone like her in this role is invaluable.”

Schneider has witnessed Dennis’ passion up close for the last decade.

“I don’t think I’ve ever met anyone that loves hockey as much as she does,” Schneider said. “She works tirelessly and she’s just so passionate about the game. I tell everyone this story, but when we went into the bubble in Edmonton a few years ago, she showed up with her hockey bag. She just had to skate. She loves being around the people and she loves to be on the ice.”

On the NHL/NHLPA Female Hockey Advisory Committee, Dennis helps ensure that girls and women experience all the opportunities and benefits that the sport provides.

She helped begin a female ambassador program for NHL teams. Dennis also helped in the creation of female-specific learn-to-play hockey programs and created a marketing toolkit that focused on reaching girls and women as a distinct NHL audience.

“It’s evident how much she loves the game and how important it is to her,” Kelleher said. “She has stayed in the game and found a way to give back beyond her playing days. To have someone of her caliber, her intelligence and her passion … to do what she does for the betterment of the game at all levels is pretty unique. She’s earned this recognition from USA Hockey for her life in hockey.”