To Pat Westrum, coaching hockey has always been about more than just diagramming plays on some whiteboard.

“I think now the newest thing is trying to teach players and coaches to have fun and ways to get it across,” Westrum said, “and not so much hammering and yelling and screaming.”

The 74-year-old Westrum, who grew up playing different sports with neighborhood kids, always believed in that way of learning and becoming better at the games they played.

“For me, it was bringing the playground back to the kids ... because that’s what I grew up with,” Westrum said. “The kids don’t have that anymore. Everything is so, so structured.”

All these years later, Westrum will accept the Walter Yaciuk Award, presented annually by USA Hockey “to an individual who has made an outstanding contribution to the organization's coaching education program during many years of service as a volunteer.” The award is named for the late Yaciuk, USA Hockey's first coach-in-chief. The ceremony will take place at the President’s Awards Dinner on June 10 in Denver.

Westrum is currently coach-in-chief for Minnesota District 6 and has served the USA Hockey Coaching Education Program since 1995. The Apple Valley, Minnesota, resident has been an amateur scout for NHL teams and played for the U.S. Men’s National Team and in the World Hockey Association. He has spent most of his life in the game.

While initially unaware of the award’s significance, Westrum soon learned all about it.

“It was pretty amazing what that gentleman did and started for hockey, training coaches and stuff,” Westrum said. “The program’s improved every year from what it used to be. The knowledge that they’re spreading is really great. I’m an old fart. I just like old-time hockey.

“Like I joke, if I was playing the way I played hockey, I wouldn’t be able to play now. I played a physical game. The kids are faster, stronger. They have more training. For me, it’s a different game completely. Because of the concussion issue and injury issues, there’s less physicality but more speed and skill.”

As Westrum pointed out, when he first got into coaching, no videos or books existed on the subject. Instead, he took inspiration from books about coaching basketball. That has all changed. 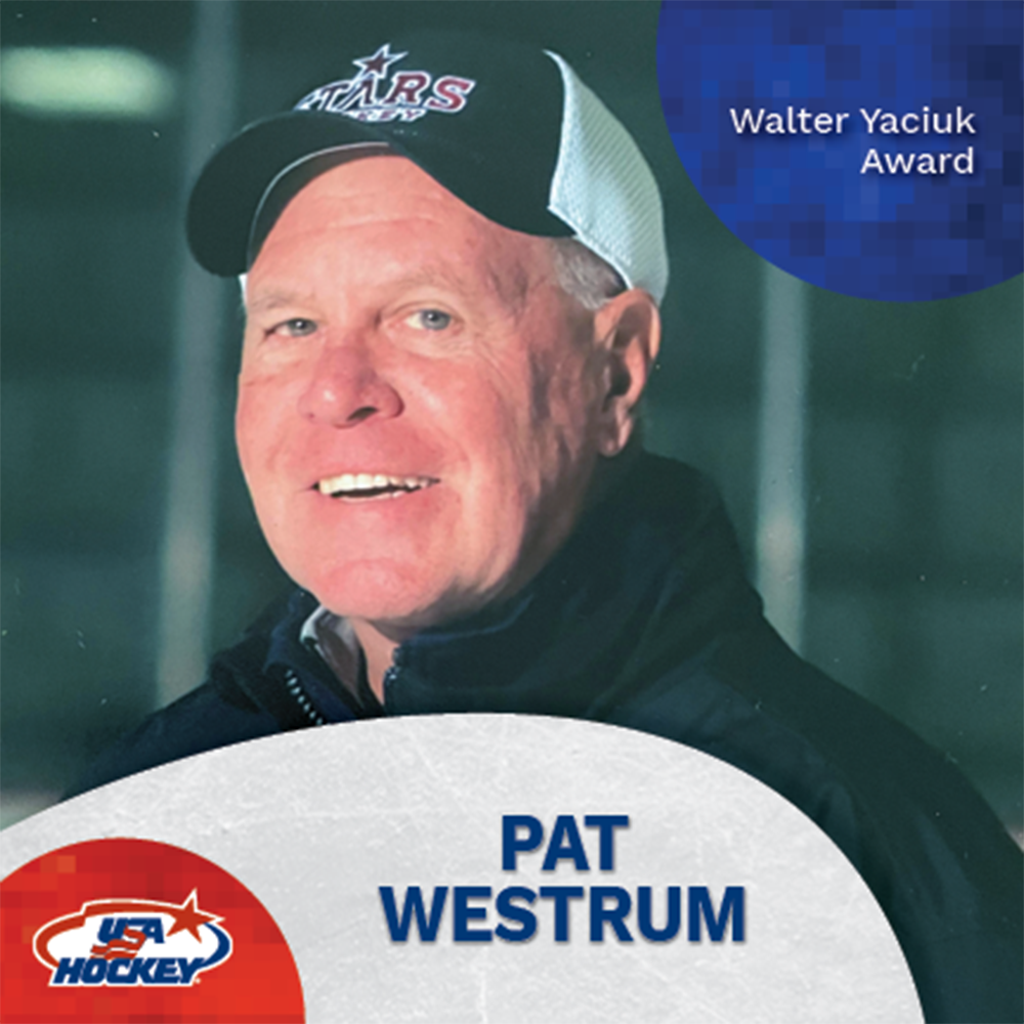 “There’s so much information that people can get and have the ability to use it,” Westrum said. “These kids are so much physically stronger and faster. I think the hardest part now is there’s so many hoops for new coaches to jump through. I think another thing I’d like to see more of us doing is more age-appropriate coaching.”

“It hasn’t really improved that much,” Westrum said. “These kids are playing all year-round, and they’re not resting their muscles or their mind. And they are trained by these specialists, and it’s the skating, puck skills and shooting, but they lose the aspect of knowing when to go somewhere.

“It’s like going grocery shopping. They’re in a hurry to go get something, but they don’t know really what they want. That’s an issue I think we have to continue to work on, and the aspect of having fun. So many kids now … are quitting [at] early ages. Yeah, it’s a lot of burnout. It’s not only hockey. It’s all sports and a lot of activities.”

Westrum said parents sometimes focus on all the money in professional sports and believe that if their children just train hard enough, they can reach that level.

“Not everybody’s going to be a pro athlete,” Westrum said. “If they’re good, and their god gives them the talent, and they really love the game, they’re going to continue to grow and develop and have a chance. I keep saying, ‘Get back, let the kids have fun and play the game.’”

Westrum longs for the days when promising young hockey players stayed fresh by participating in other sports.

“I’d love to see that [return],” Westrum said. “But there’s no way that’s ever going to happen.”

Westrum does envision a future in which there are fewer players on the ice to accommodate for the skill in today’s game.

“One thing I think is going to happen, starting in the National Hockey League, the rinks aren’t big enough for the play,” Westrum said. “They may end up having … 4-on-4 hockey. The Olympic-size rink is not the answer.

“People love it when they go into overtime and they go 3-on-3. It shows skill level. It shows a lot of things.”