She didn’t get involved with hockey until 10 years ago, at age 37, but Jen Tracy certainly has made up for lost time.

The 47-year-old from Monument, Colorado, continues as a player in women’s and coed leagues, a board member at the local and state levels and as a volunteer in the blind hockey and sled hockey realms, in girls’ hockey programs and in various outreach efforts.

In recognition of her immersion in the sport, USA Hockey has named Tracy its Adult Player of the Year. She will be honored June 10 at the President’s Awards Dinner in Denver.

“I’m totally surprised and feel really humbled by the whole thing,” Tracy said. “I did not expect it at all. I was totally speechless at first. It was just such an honor. I was really excited.”

An elementary school teacher for 24 years, Tracy was on her lunch break a few weeks back when she got the phone call that she would receive the award.

“I just think about all of the benefits I have reaped from being a part of hockey, from the physical side of things and getting that exhilaration when you make a good play to meeting some of the most high-quality individuals I feel like you’ll ever meet,” Tracy said. “I think hockey just attracts really wonderful people, and [I’ve made] lifelong friends through what I’ve done in hockey.”

Tracy was born in Canada, then grew up in Vermont before moving to Colorado to teach.

“I always wanted to play [hockey], but I grew up a swimmer,” Tracy said. “I swam competitively from the time I was about 6, and then I went to the University of Vermont and swam there. My family wasn’t in a financial position to be able to have me play hockey anyway. Swimming was something that we could afford.”

When her husband started playing hockey a decade ago, Tracy saw a flyer from the Pike’s Peak Women’s Hockey Foundation inviting women to try the sport for free. She did so and was quickly hooked.

“I didn’t really know anything about local leagues,” Tracy said. “I definitely didn’t know that there was an actual women’s league. So, I found that exciting.” 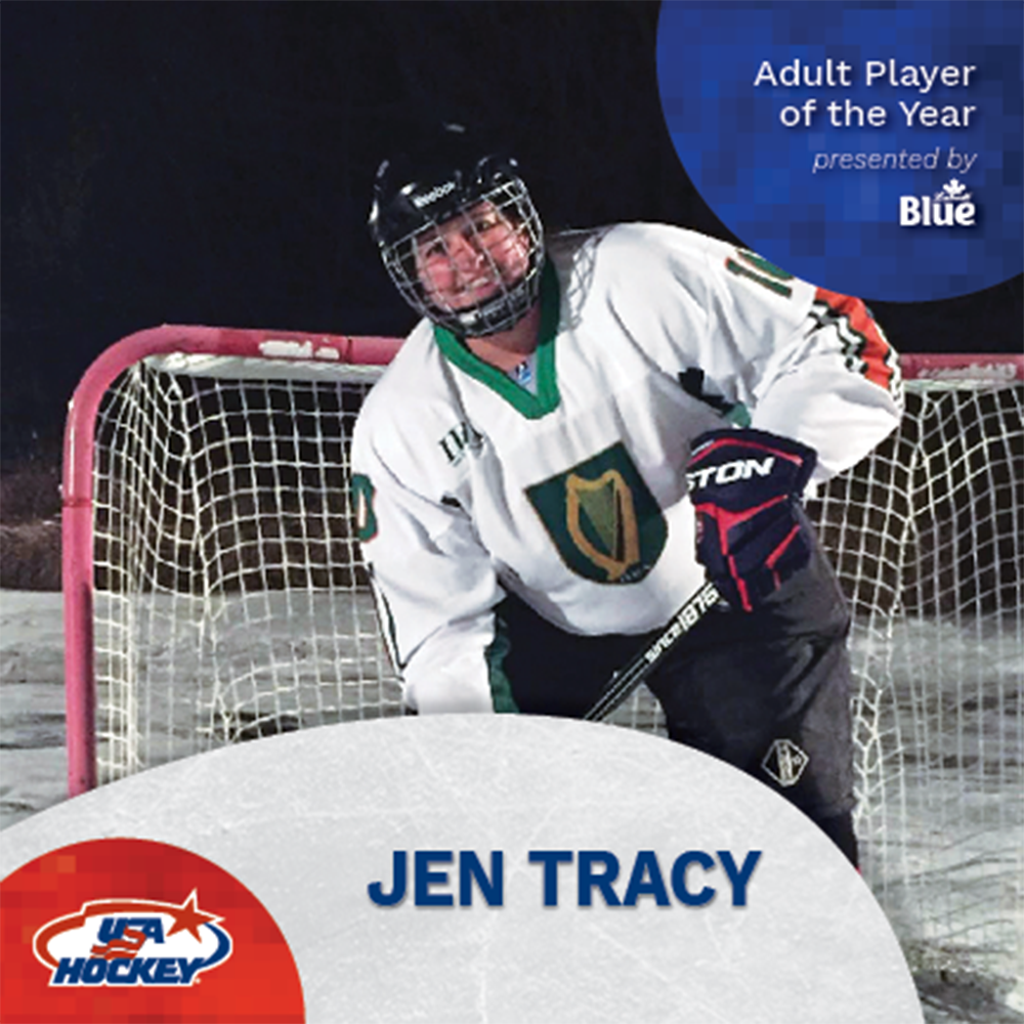 A year later, she was serving on the foundation’s board of directors.

“I think because I did not have the financial opportunity to play as a child, that’s why I really love doing so much outreach and removing any sort of barriers that any player — male or female, adult or child — has,” Tracy said. “I want to allay those fears and let them know that there [are] ways to get on the ice without shelling out thousands of dollars. There [are] so many opportunities to get involved in the sport that we love.”

Currently, Tracy is president of the foundation and serves as secretary of the Women’s Association of Colorado Hockey board. One of her volunteer efforts is especially close to her heart.

“I really, really enjoy the blind hockey events the most, probably because I personally have a degenerative eye condition that one day may result in blindness,” Tracy said. “And knowing that there will be an opportunity to play is really important to me.”

“I am reminded of my first clinic I went to as an adult with Coach Al,” Tracy said. “I was starstruck since I had been a [Boston] Bruins fan my entire life and even had Coach Al’s hockey card.

“He has truly been my inspiration for growing the sport, and we have worked in tandem more and more over the years.”

Tracy has watched women’s and girls’ hockey grow in Colorado since she got involved.

“When I started about 10 years ago, we had one team, barely, of women’s hockey players in our organization,” Tracy said. “And they were really worried that the organization wouldn’t be able to stay in existence.”

Tracy said the foundation did outreach and hosted events “to bring more women and girls into hockey. And now I’m super-proud to say that we had four teams in our organization this year at four different levels.”

Now nearing her own half-century mark, Tracy has no plans to leave the ice anytime soon. She pointed out that she skates with women in their 60s and 70s and has a good friend in his 80s who officiates.

“I just feel like I want to be on the ice as long as possible, for sure,” Tracy said. “I never thought of hockey as a lifelong sport, and I have totally changed my thinking on that. I see people of all ages enjoying the sport for many, many years.

“I love the team side of this. I love all the camaraderie and applying the new things that we learn. I think the best thing is the people that I’ve met in my different roles. I love the supportive community that hockey is.”