Jason Hodges, a longtime athletic trainer with USA Hockey, was a significant key to the organization and its players navigating the pandemic throughout the past two seasons.

For his efforts and commitment, Hodges is the recipient of this year’s Excellence in Safety Award from USA Hockey, which honors individuals who go above and beyond to make hockey a safer game for all participants.

“It was an honor to be recognized by your fellow peers in the medical and safety field,” Hodges said. “I never thought I’d get this award. For me, being an athletic trainer, which is not your typical recipient of the award, it was a surprise.”

Hodges was nominated by Dr. Michael Stuart, the 2008 recipient of the award and the chief medical and safety officer for USA Hockey. The Excellence in Safety Award could also include contributing to decrease the risk for injury or promoting safety on the playing surface by working in the fields of medicine, epidemiology, psychology, kinesiology, physiology, chemistry, physics or engineering.

“Jason is really dedicated to not only the sport of hockey, but the [USA Hockey National Team Development Program],” Stuart said. “He’s almost been there since its inception and he’s been an advocate for all of our players. He’s had an incredible career of nurturing these young athletes and so many of them are now NHL superstars.”

Hodges, now in his 24th season as an athletic trainer with the NTDP, has been at the center of developing and providing industry-leading health and safety protocol for the nation’s top athletes.

What stood out most to Stuart was Hodges’ ability to play a key role in the welfare of athletes and staff as the COVID safety officer for the NTDP and the 2022 U.S. Olympic Men’s Hockey Team.

“It has been a real challenge for us in our daily lives, but [Hodges] has had to deal with tournaments, international travel and different protocols and rules for intensive testing,” Stuart said. “He accepted that additional commitment to keeping our players, coaches and staff from an infectious disease standpoint.”

Hodges admitted serving as a COVID safety officer was “a lot of work.” But Hodges also said that he’s not the only one in the world who’s had to deal with the virus.

“There are rules and regulations in place and I’m the one who sometimes has to be the bad guy that enforces those rules,” he said. “You have to balance that and have good communication and a good relationship with the athlete. I can relate to them and say, ‘I know this isn’t fun, but we have to do it,’ and they understand that part of it.”

Hodges said the 2022 Olympic Winter Games was the most intensive event when it came to protocols. 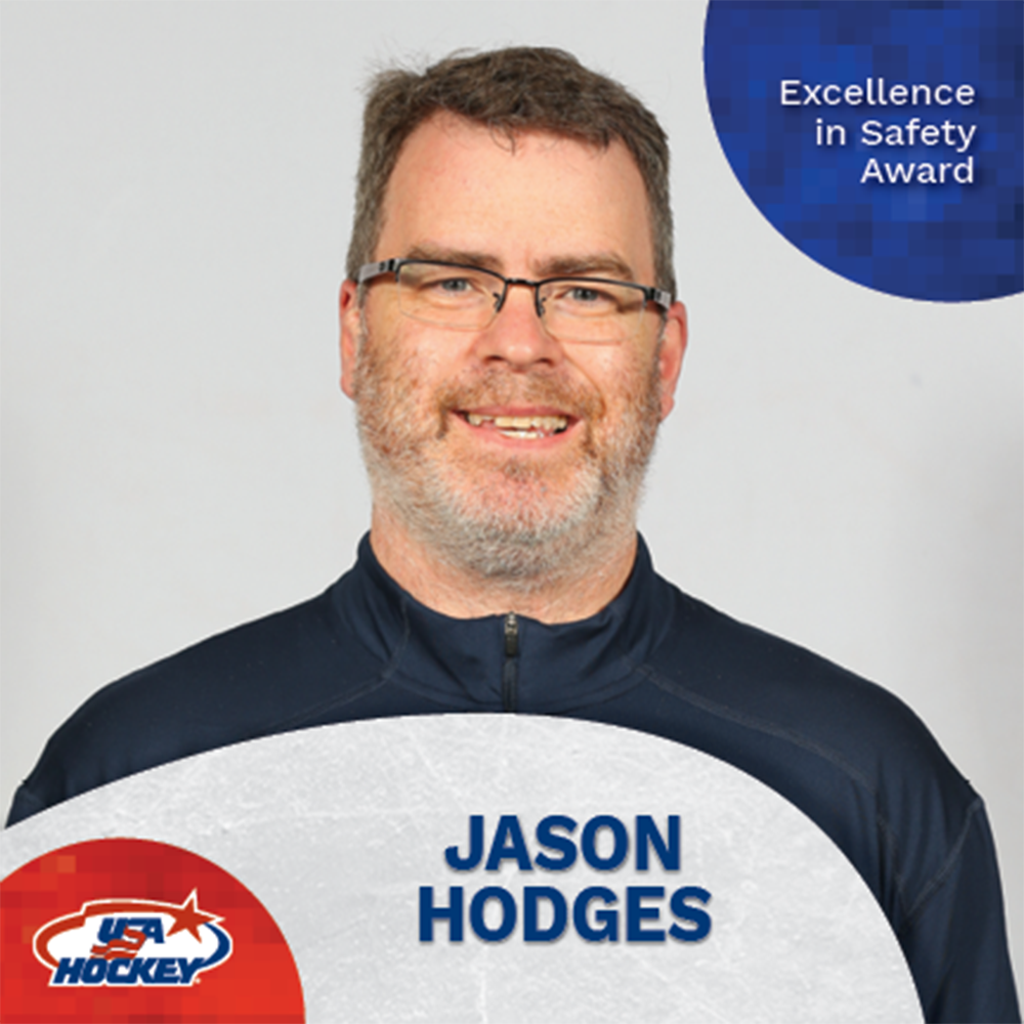 “That was a different animal because at this stage the rules were a little different than the IIHF events,” Hodges said. “You had to navigate that and we were at an uptick in COVID cases in January before the Olympics so that put stress on everything. It took patience, but everybody was able to go and participate and not miss a game.”

The experience factor, having served the team for almost 25 years, and trust with the athletes, certainly helped Hodges throughout the last two years.

“There were days I’d have to call our coach and say that we had one or two positive cases, so we might have to think about canceling practice or this weekend’s games,” Hodges said. “With experience comes a little bit of credibility because everybody knows that I want to play just as much as everybody else. Even though it was a brand new situation, obviously the more experienced you are, the better you can handle it.”

Hodges, a native of New Baltimore, Michigan, is a 1998 graduate of the University of Michigan with a degree in movement science from the division of kinesiology. He earned his master’s degree in athletic training from Indiana State University in 1999.

“I’ve worked with Jason for more than 20 years and he’s the best in the business,” said Scott Monaghan, the assistant executive director for the NTDP and USA Hockey Arena. “What he had to go through the last two years with COVID and the ever-changing restrictions, he handled it like a pro all the way. He kept our guys on the ice, kept them practicing and I don’t think anybody could’ve done a better job.”

Along with his Olympic experience this past February, Hodges has worked dozens of international tournaments with USA Hockey at the junior, Under-18 and senior levels. He’s been the trainer for nine gold medal-winning teams, as well as two silvers and two bronzes.

His first U18 gold medal — the second for USA Hockey — is a standout moment for Hodges. It was a team that featured stars like Phil Kessel, Nathan Gerbe, Erik Johnson, Jack Johnson and more. Another one is a more recent memory when Troy Terry helped the U.S. defeat Russia in the semifinals and Canada in the gold-medal game during the 2017 IIHF World Junior Championship in Montreal.

“Obviously, your first gold medal stands out a lot,” Hodges said. “And to win that event [2017] in Canada was huge. It was a great memory, the way we did it. To me, those are probably my two biggest memories, but there are a lot. I’ve been fortunate enough to do this for a long time and I’ve worked with some great people.”